"You 100 percent don't get through Ranger School on your own" 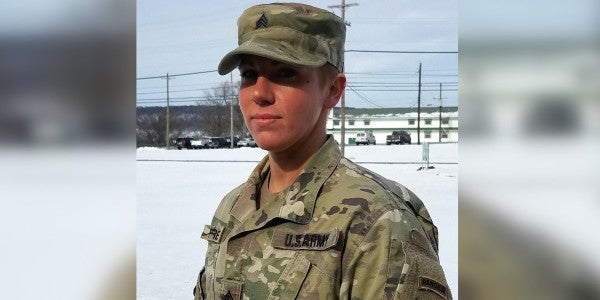 When asked what Army Ranger School was like, Sgt. Danielle Farber wasn't going to beat around the bush: “It sucks.”

Farber was one of the first two enlisted women from the Guard to graduate from Ranger School and the very first from the Pennsylvania National Guard.

In a new Army release, she offered a frank assessment of the Army's most arduous leadership course, which she called the “hardest course” she'd ever done despite being as physically and mentally prepared as she possibly could have been.

“You're cold, you're wet, everything's frozen, and you're tired — you only had about 20 minutes of sleep — and then you get up and you have to do everything in the misery,” said Farber, who currently works as a medical instructor at Fort Indiana Town Gap's 166th Regiment Regional Training Institute, said. “I was ready to be done because it was all of the things I hate, combined.”

“All your squad-mates and the guys in your platoon, they get you through it,” she added. “You 100 percent don't get through Ranger School on your own.”

Farber spent a year training for the course and graduated alongside a South Carolina National Guard soldier, Staff Sgt. Jessica Smiley, on Dec. 13.

According the Army, only 42 women have received their Ranger tabs since the course was opened up to women in 2015.

Farber was one of six women in her class of 400, and only four of them made it to graduation.

In the Army release, Farber said she's “kind of used to being the only female when it comes to stuff like this,” and that while she primarily wanted to complete the course to sharpen her leadership skills, she had another motivation: “A lot of people said I couldn't do it, so I wanted to prove them wrong.”

Although she didn't seek the celebrity, Farber now hopes to inspire other young women with her accomplishment.

“I had a few students from the course I teach reach out to me, and they told me how they showed their daughter pictures of it and told their daughters they can do anything,” she said. “That's probably one of the coolest things that have come out of it.”