A noncommissioned officer with the Wyoming National Guard has graduated from a two-week infantry qualification and transition course to become... 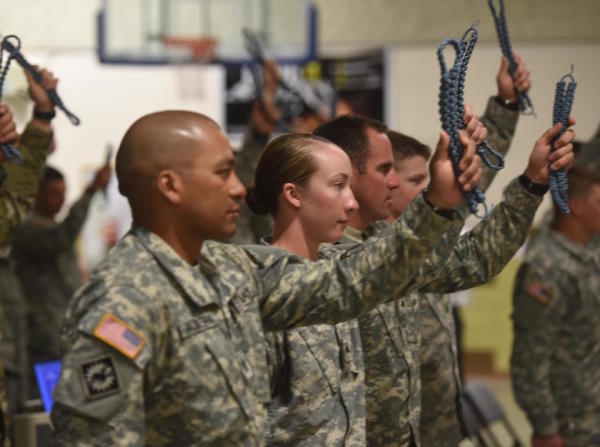 A noncommissioned officer with the Wyoming National Guard has graduated from a two-week infantry qualification and transition course to become the Army’s first female enlisted infantry soldier, Army Times reports.

Sgt. Shelby Atkins, who served as a construction engineer before switching military occupational specialties and deployed to Bahrain, was not the only woman to attend the course, but was the only one to graduate, a Wyoming Guard spokeswoman told Army Times.

Related: The first woman graduate of Ranger School is about to join the infantry »

The graduation took place on May 26.

Atkins and her 32 fellow graduates, all men, will be assigned to C Company, 1st Battalion, 297th Infantry Regiment — the first infantry unit in the Wyoming Guard in more than 100 years.

According to the Wyoming Guard spokeswoman, the purpose of the two-week course was to train personnel for that specific unit, which is replacing the 1041st Multi-Role Bridge Company and is scheduled to activate in July.

While Atkins is the first woman to earn MOS 11b, she is not the first to don the infantry’s signature blue cord. That distinction belongs to Capt. Kristen Greist, a Ranger School graduate who became the Army’s first female infantry officer in April.

In December, Defense Secretary Ash Carter made the controversial announcement that women will no longer be prohibited from serving in combat arms units, including infantry, armor, Special Forces, and Ranger Regiment.

So far, 22 female Army cadets have been approved for assignment to the infantry and armor branches as second lieutenants, and a number of enlisted female recruits are expected to begin training for combat occupations in early 2017.

“[Atkins] is the first female Army NCO in the total Army to be granted the infantry MOS,” a National Guard Bureau spokesman told Army Times.