President Barack Obama has tapped Air Force Gen. Lori Robinson to be the next head of U.S. Northern Command, Defense... 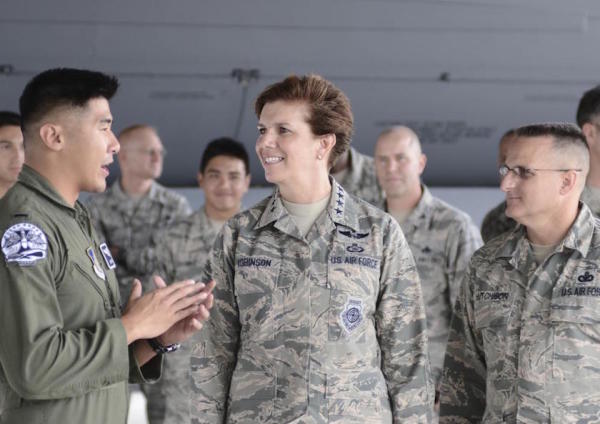 President Barack Obama has tapped Air Force Gen. Lori Robinson to be the next head of U.S. Northern Command, Defense Secretary Ash Carter announced on March 18th. If confirmed by the Senate, Robinson would become the first woman to lead a unified combatant command — making her the highest ranking woman in military history.

Northern Command, or NORTHCOM, is responsible for defending the U.S. homeland and surrounding region. It also oversees the North American Aerospace Defense Command, or NORAD. As the head of NORTHCOM, Robinson, whose Air Force career began in 1982, would be the top general overseeing military activities in North America.

Robinson’s nomination to one of the most senior positions in the U.S. military may come as little surprise to those who have followed her meteoric career. As Defense News reports, between June 2012 and October 2014, she rose from two-star serving as deputy commander, US Air Forces Central Command, to four-star serving as commander, Pacific Air Forces, an assignment that made her the first female four-star to command combat forces.

Now, Robinson is set to become the highest ranking female service member in our nation’s history. While women have reached the rank of four-star before — including Adm. Michelle Howard, who currently serves as the 38th Vice Chief of Naval Operations — none have reached a billet as high as a unified combatant command like NORTHCOM.

“General Robinson, it just so happens, would also be the first ever female combatant commander,” Carter said at an event hosted by Politico.“That shows yet another thing, which is that we have, coming along now, a lot of female officers who are exceptionally strong. And Lori certainly fits into that category.”