Why More Women Need To Share Their Military Experiences

I have only been given truly terrible advice once in my military career, at its inception, “When you go to... 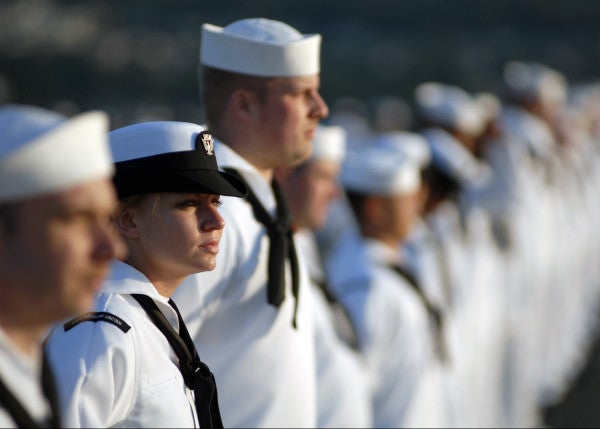 I have only been given truly terrible advice once in my military career, at its inception, “When you go to Officer Candidate School, just keep your head down and try to blend in with the others, and fly below the radar.”

The advice came from a recently commissioned male ensign, who like most of his fellow officer candidates, had just been another white guy with a shaved head. My class had four women in a class of 30 candidates. We did rifle drills and push-ups in the sand with the rest of our classmates, but we stood out because we were there.

From this failed advice, I learned two very important lessons before I even went to the fleet: First, as a woman, you stand out in the military just by showing up. You are always under a microscope. Second, the vast majority of your 80% (or higher) male comrades are completely clueless as to how your daily experience in the military world can be vastly different.

Post-9/11 veterans, especially of the millennial generation, are leaving the military, and starting to write about their experiences and war stories. There’s one problem: when nearly one-fifth of the service members of the post-9/11 generation are female, the emerging voice of the millennial veteran is still overwhelmingly male. With the exception of writer-veteran Kayla Williams, and a handful of writers here on Task & Purpose, the literary voice of women veterans is nearly silent. The cinematic depiction of women in the post-9/11 military is minuscule — the 2014 film “Fort Bliss” was one of the first mainstream depictions of a military woman’s war story from the post-9/11 era.

We are here, too. And there are a lot of us.

The experiences of women in the present-day military are not just those of combating the prevalence sexual assault and abhorrent treatment of victims, or overcoming the combat exclusion policy by integration into formerly all-male units. These are tremendously important issues that should not be ignored, and have affected me and my sisters-in-arms experiences while serving. But they cannot and should not be the only matters discussed when it comes to women in the military.

I have had days when I have felt my “otherness” as a female naval officer — those times that I’ve somehow been made to feel like I don’t fit in — and days when I am a naval officer who also happens to be a woman. Where these two definitions intersect is the core of the narrative of the female service member: not that we are different, but that we contribute to a vital part of the military’s mission, and our experiences need to be known. Furthermore, telling our stories allows us to discuss the successes and failures to make serving easier — and more normalized — for the women who follow.

The acceptance of women in the military still hasn’t been normalized in parts of the military, and most of American society. While an entire generation of millennials are re-inventing the veterans’ narrative as a whole, women still need to be part of that story. It’s part of the our generation’s process of transitioning the idea of women in a professional role from exceptional to conventionally accepted.

In the 1970s, my mother was one of the 25% women in her Ivy League law school class. Some of her male classmates told her that she was taking up the seat of a Vietnam veteran, and it was a waste for her to be there anyway because she was just looking for a husband. When I call her to discuss some of the challenges I’ve faced that are specific to being a woman in a leadership role, she has responded with a sadness that I’ve had to face the same issues she did: being sexually harassed by superiors, interrupted or ignored in meetings, and knowing that I need to be twice as good as my male peers to be considered just as competent.

However, to me, the military is just where other professional disciplines were 40 years ago.

When it comes to gender integration, the military lags a generation behind other professions, partly because the first women service academy graduates didn’t commission until 1980. U.S. Naval Academy graduate and Adm. Michelle Howard demonstrates how women are finally rising to the highest ranks in the military. Howard was no doubt aided in her career by the fact that the Navy lifted the ban on women on surface and air combatants in 1993, which meant that she could promote based on her success in operational-leadership positions.

Howard’s promotion to four-star is still news. Women attending service academies have become routine. Telling the story of women service members and veterans makes it less foreign. It gives a name to something hidden. It makes it normal.

When I think of how to represent that voice, I am reminded of my officer stateroom on my last ship.

There were three of us. One was married to a former service member whom she had met when they were both junior sailors. He had left the military to support her career as an officer and raise their young children. She spoke softly into the phone in our room to each of her daughters, laughing with them, but crying once she’d replaced the receiver. Hours later, on watch, I overheard her reports over the radio, her voice unwavering and clear.

The second was married to a civilian who was taking care of renovating their new home while she was away. Despite the fact that she got screamed at by our commanding officer more than anyone else (for reasons nobody really understood), she still managed to keep a cheerful face in front of her department, and helped keep them from slipping into a funk themselves. She had the spirit and patience to help talk me through a devastating break-up that had happened within weeks of deployment.

And then there was me, hoping that every day we sailed further from the American coast, that every eight hours on watch, would mean I would feel a little less heartbroken over my ex, a fellow service member. I did.

That stateroom, on a ship afloat in the middle of the Gulf, is the beginning of a story. These are stories that are only still whispered — of female friendship in the sisterhood of women in the military; of the unconventional relationships; of the absurd questions women are asked that a man would never be asked (“So did you join just to find a husband?”); of learning to lead and be a role model; of the exceptional people met along the way. Every experience matters because, frankly, it’s a story that’s barely been told.

Women veterans’ stories are simultaneously daily and extraordinary. In piecing each of these bits together, we can start to create a narrative that fosters the perception of women becoming “another” and not an alien “other.”