On Oct. 8, Starbucks and the Schultz Family Foundation convened government, nonprofit, and corporate leaders from around the country in... 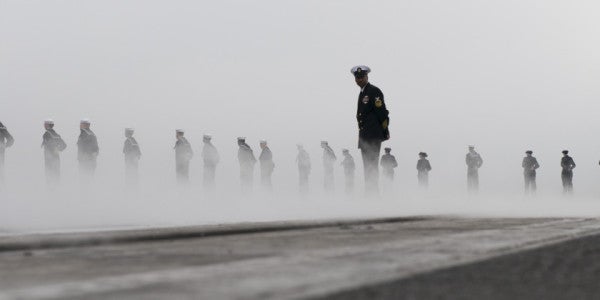 On Oct. 8, Starbucks and the Schultz Family Foundation convened government, nonprofit, and corporate leaders from around the country in their Seattle headquarters for “The Muster,” a one-day event focused on bringing together collective leadership to advance veterans in their careers and communities. While many of the attendees included the usual stakeholders and advocates seen at similar events, this invite list included many new faces that brought new ideas and new opportunities to the conversation.

Threaded throughout the day’s commentary, panel remarks and smaller group discussions was the notion of bridging the civilian-military divide. Howard Schultz even started the day claiming, “That is the challenge of the day.”

It’s important to first define the term since many Americans are confused by it. As Marjorie Morrison, chief executive officer and founder of PsychArmor, stated at the event, “Americans with no military affiliation don’t think of themselves as civilians. To them, the word ‘civilian’ refers to Department of Defense employees who work on base but are not uniformed military personnel.” However, the term “civilian-military divide” actually speaks to the understanding gap between those who have served in the military and those who have not.

This division raises many concerns best articulated by RAND in a 2007 monograph, The Civil-Military Gap in the United States:

Specifically, there is a potential for a civil-military gap to undermine military effectiveness by reducing support for defense budgets, increasing the difficulties of recruiting quality people to join the military, and dwindling public support for using military force, particularly where high casualties are likely. Some observers even worried that a growing civilian-military gap could undermine the principle of civilian control of the military.

With less than 3 million men and women currently wearing the uniform (1% of the population) in an all-volunteer force, coupled with a continued decline in military experience in the halls of Congress, America risks the potential circumstances articulated by RAND authors. Some have argued that reinstituting the draft would reconnect America to its military, but doing so only recruits a different 1%. It does not increase the size of the force to the numbers seen during World War II where more than 12% of the population wore the uniform. The reality is that with today’s technology, a small, elite force will remain the norm for the United States in the foreseeable future.

During the Starbucks event, Dr. JD Crouch II, president and CEO of the USO, poignantly articulated the term itself poses problems. The word “divide” implies an intentional decision by both civilians and service members to choose sides. The reality, however, is that no party has intentionally chosen to isolate itself from the other. Instead, a “drift” has occurred. Over time, those who have worn the uniform have drifted apart from those who have not served. In many cases, it’s simply a matter of volume and geography. With the percentage of the population affiliated with military service decreasing and the reduction in the location and number of military bases in the United States, a drift is a natural phenomenon.

If the division between America and her military is not an intentional decision of isolation, how then do we mitigate the drift and change the mystical narrative about military service? During my tenure in the Chairman’s Office of Reintegration, the director and I often talked about the challenges of removing a narrative. We concluded that it was impossible to remove an unfavorable narrative. Instead, you could only hope to replace it with a better narrative. Tim Milburn, a resolutions manager at a major computer company and an author and speaker on leadership, offers insights on changing narratives; many apply to this present challenge.

Here are some practical ways to reduce the drift and change the narrative about military service.

Share your story. Sociologists teach us that societies are always changing. These changes are often the result of modification in social relationships. Sharing your experiences with others is a vital step in reducing the civilian-military drift. As Gen. Martin Dempsey, former chairman of the Joint Chiefs of Staff, articulated, “If you want to stay connected to the American people, you can’t do it episodically.” The most powerful way to reconnect with the rest of America is to openly share your military experiences without exaggeration or diminishing the realities.

Bring a friend. Another pivotal idea coming out of the Muster event was the concept of bringing a friend to military or veteran events. If you’re a veteran advocate, stakeholder, leader, or any of the millions of Americans affiliated with military service, bring a friend with no military affiliation to any event that offers insights into the military experience. The list of opportunities is endless. Air shows, speaking engagements, parades, a dinner at a local membership post, symposiums, reunions — these all offer opportunities to educate the rest of America about your military experience.

Expand Military Mondays. Under the leadership of Professor Patty Roberts, William & Mary Law School's Lewis B. Puller, Jr. Veterans Benefits Clinic partnered with Starbucks to create “Military Mondays” at Starbucks. These recurring events were designed to connect staff and students to veterans needing help with disability claims while creating a safe place for vets to re-acclimate with their community. Although I am a recurring customer and fan of Starbucks, there is no reason this powerful concept needs to remain only in coffee houses. Creating similar opportunities where veterans connect with communities around the country at restaurants, rotary clubs, workplaces, churches, community centers, and schools could rapidly increase meaningful interactions between veterans and the community.

Find a veteran and listen. If our nation is going to reduce the drift occurring between the military and the rest of the nation, everyone is going to need to take an active role. Standing and offering applause at a sporting event or hitting the “like” button on social media isn’t enough. To really understand those who volunteered to serve this nation, civilians are going to need to find a veteran, service member, or family member and make time to listen to their experiences.

Take a course. If you’re an American with no military affinity, you can spend as little as one hour taking a free online course that will help you understand the military experience. PsychArmor offers free online courses giving Americans an opportunity to learn about military life in a variety of areas and their call center provides support and resources to help Americans serve those that served.

Read and share. Howard Schultz and Rajiv Chandrasekaran authored a national bestseller, “For Love of Country.” This powerful collection of personal stories of triumph and struggle is one of the best collections I’ve read in recent years. As a veteran of 20 years in the Air Force who witnessed the lives of three families turn upside down following the deaths of their sons, I related quickly to the book’s profiles and found myself quickly recommending this book to others. On my flight home from Seattle I realized that keeping my copy of this book on my office shelf was a selfish act. I’ve pasted a label inside the front cover of the book encouraging others to read it, sign it, take a picture of it (#vetsbringfriends) and then pass it on to another friend. This book, in my opinion, is more powerful if shared. I look forward to seeing where my copy of this book winds up and hope to see others with copies doing the same.