Why Getting More Veterans On The Hill Is A Bipartisan Issue 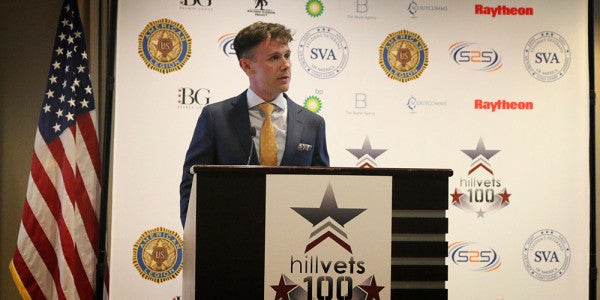 On March 22, HillVets, a Capitol Hill veterans group, hosted a gala honoring 100 key influencers in the veterans community for 2015.

In a crowded ballroom on the fifth floor of the Reserve Officers Association in Washington, D.C., roughly 200 people of varying backgrounds and aspirations came together in pursuit of a common goal: to acknowledge the political and cultural achievements and contributions made by military members, veterans, and their advocates.

The evening's keynote speaker, former Secretary of Defense Chuck Hagel, set the tone as he addressed the need for veterans in politics, particularly at the highest levels.

“When you look at the presidential candidates today, not one is a veteran,” said Hagel, who in addition to being a former senator is also a veteran of the Vietnam War. “Our current president and vice president are not veterans. The entire senior White House security staff, none are veterans.”

Hagel addressed the lack of veterans in key political posts, saying it led to a deficit in national security and defense discussions and has widened the divide between civilians and the military.

“But there is something missing here,” said Hagel. “And at a time when everything is hair triggered, everything is nitro glycerine, and miscalculations can lead to a lot of trouble, we need veterans input.”

For Justin Brown, the founder of HillVets, getting more veterans in politics is a bipartisan agenda that benefits both sides of the aisle.

“I think for us, at HillVets, they’re folks who have a proven commitment to putting their country first, and we certainly see that on Capitol Hill, where I’m a veteran before I’m a Republican or a Democrat,” said Brown. “That ends up being a hugely important common denominator when we start talking about national security issues, about compromise, when we start talking about things like the Post-9/11 GI Bill. “

HillVets began in 2012 with a series of informal meetings between veterans in D.C., when Brown realized there was a need for veterans in the capital to have a forum that would empower them to break into politics, network, and come together to collaborate.

“We weren’t sure what the response from the community would be, and it ended up being incredible,” said Brown of the HillVets 100 list, something he says he hopes will continue next year. “Every major veteran service organization sponsored it. We had two secretaries here with us tonight, just incredible folks.”

Other speakers included notable veterans in politics like Rep. Sam Johnson of Texas; Rep. Tim Walz of Minnesota; and acting Secretary of the Army Patrick J. Murphy; as well as Jake Wood, the chief executive officer of the veteran service organization Team Rubicon. The event also featured performances from the Armed Services Arts Partnership, the Telling Project, and honored Shaye Haver and Kristen Griest, the first women to graduate from the Army’s elite Ranger School.

Don Bramer, a Navy veteranand the founder and chairman of Bramer Group, a strategic consulting firm, described HillVets as not only a networking tool, but a talent pool.

“I look at it as a huge mass of talent, whether it’s in leadership or discipline and just knowing how to overall manage,” said Bramer. “When it comes to D.C. where we have so much gridlock, you want to look at a group that knows how to work with diversity.”