99% Of Congressional Staffers Have Never Served In The Military

A recent survey from HillVets, a bipartisan veterans group based in Washington, D.C., found that roughly 1% of staff members... 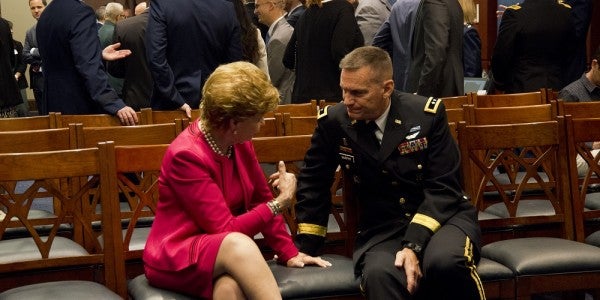 A recent survey from HillVets, a bipartisan veterans group based in Washington, D.C., found that roughly 1% of staff members serving in congressional offices are veterans. In contrast, roughly 60% of annual discretionary spending is related to veterans and the military.

“HillVets for the last three years has been highlighting the lack of veterans on Capitol Hill that are working in the policy space,” Justin Brown, Hillvets’ founder, told Task & Purpose. “When we saw that the numbers had not really changed much, we thought it was time to do something a bit different.”

As part of a new campaign to see more veterans hired to staff positions on the hill, HillVets reached out to congressional leaders.

Related: Why Getting More Veterans On The Hill Is A Bipartisan Issue »

“We didn’t think it was too much to ask each member of Congress to really do their utmost to consider a veteran as they are making hiring decisions,” said Brown.

The group hopes that leaders in Congress will take steps to hire veterans to their staff, host a non-partisan discussion on how to increase veteran hiring on the Hill, and monitor the rates at which veterans are hired to positions on Capitol Hill.

According to HillVets, if every member of Congress hired one veteran, that would increase the percentage of vets on Capitol Hill from 1% to 5%.

“Just one veteran in an office gives that office that unique perspective related to military service and what it means to be a veteran and that’s an important framework and mindset we need to have in congressional offices,” said Brown. “To have that brain trust completely missing from the legislative arena is very concerning to us.”

In addition to bringing on personnel with experiences with the military, Brown sees hiring veterans as a way to increase bipartisanship in Congress.

“That common identity with other veterans on Capitol Hill fosters a level of trust that other folks who do not have military experience, are not veterans, they don’t enjoy that same level of camaraderie,” he said.

By increasing the number of veterans on Capitol Hill, it opens up more opportunities to reach across the aisle, argues Brown.

“There are few identities that really trump partisan politics, and the military identity, in our experience, is one,” said Brown. “I’m a Navy veteran before I’m a Democrat.”