Our Way Of Life Endures Because Of You, President Tells Wounded Vets

“You've risked all that you have, all that you possess, to keep our people safe and our democracy secure,” President... 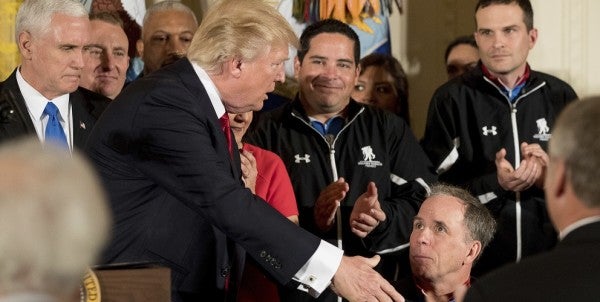 “You've risked all that you have, all that you possess, to keep our people safe and our democracy secure,” President Donald Trump Trump told a crowd of wounded veterans on Thursday, as he welcomed them to the White House.

Standing alongside the first lady, Vice President Mike Pence and his wife, Karen, the president added, “You've earned our freedom with your sweat and your blood and your incredible sacrifice. We salute you, we salute your service, and we salute the flag you have so courageously protected. We love our flag. Thank you.”

Related: Dear President-Elect Trump, The Military Community Wants You To Address These Issues »

It was an honor to host our American heroes from the @WWP #SoldierRideDC at the @WhiteHouse today with @FLOTUS, @VP and @SecondLady. #USA?? pic.twitter.com/puVTKwUfRp

The White House hosted members of the Wounded Warrior Project and celebrated this year’s annual Annual Soldier Ride in Washington, D.C. The ride, now in its ninth year, brings together wounded military veterans from across the country for team building and cycling during a visit the nation’s capital.

Trump went on to praise those in attendance for volunteering to serve:

“Each of you has forged in battle the sacred bonds of loyalty that link our people together. Our country, our values, our very way of life, endures because of you, and it endures because brave Americans raise up in every generation — and they really do — they rise to the occasion like nobody can rise to an occasion — to fight for this country and to defend its citizens with every ounce of blood, sweat, and tears in their bodies.”

Military veterans were welcomed to the White House during the 9th Annual Soldiers Ride in Washington, D.C. on April 6.Courtesy photo