This Might Be The ATV To End All ATVs

There are all-terrain vehicles, and then there’s the Shaman Avtoros ATV — an eight wheel, 21-foot-long behemoth cargo truck that... 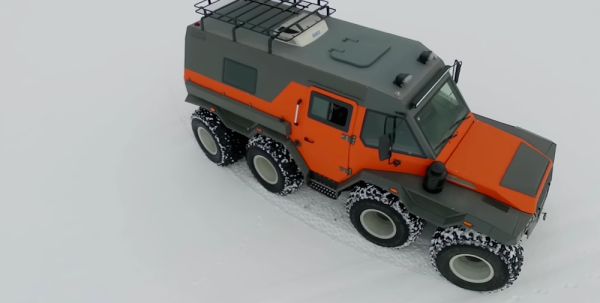 There are all-terrain vehicles, and then there’s the Shaman Avtoros ATV — an eight wheel, 21-foot-long behemoth cargo truck that can cross virtually every terrain on the planet, from tundra to desert and even bodies of water.

Russian automobile manufacturer Avtoros built the Shaman with independent all-wheel suspension and a clearance of 1.5 feet to make it adaptable to all manner of terrestrial obstacles. Its low-pressure tires are what make it versatile enough to handle sticky situations like trudging through marshes and rolling through shallow streams and rivers.

The diesel-fueled Shaman also has a 260-liter tank, and clocks in around 50 miles per hour on flat terrain (four if you’re rolling through wetter terrain) thanks to its 146-horsepower engine. It can even scale treacherous climbs of up to 45 degrees: According to Top Gear, the Shaman’s axles “can be locked in various combinations, allowing you to scrabble up or down the most challenging of inclines or declines.”

Did we mention it, uh, floats? From Top Gear’s test drive:

With the eight-wheel steer activated, you can throw the Shaman around like it’s a Caterham crossed with a monster truck, and with a comfortable amount of run-off it’ll even indulge particularly hooligan drivers in an unconventional take on the donut, the twist being that it never actually loses grip.

That’s not its party trick, though: an ability to cross rivers and lakes with the attachment of an optional propeller is what seriously boggles the mind. It’s not quick – 4mph is as fast as you’ll ‘swim’ – but floating in something this size and weight feels like achievement enough.

The Shaman boasts a central driver’s seat and enough room for eight passenger chairs or two long bench-style seats — perfect for ferrying troops into combat with the great outdoors (or the beach). Not to mention it’s highly customizable. Seriously, anything goes. And you can own one for the totally reasonable price of just $200,000.