The Army’s Humvee Replacement Marks The End Of An Era

The era of the Humvee is over. On Aug. 25, the Army announced the winner of the production contract for... 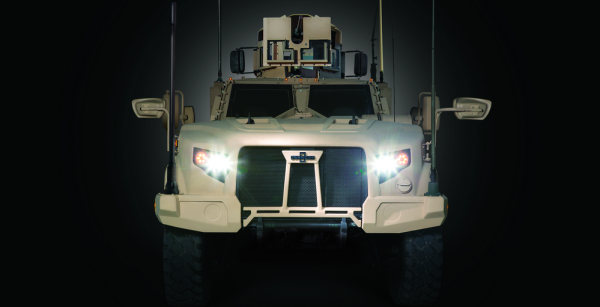 The era of the Humvee is over. On Aug. 25, the Army announced the winner of the production contract for the Joint Light Tactical Vehicle, the program that will replace the Humvee, officially called the High Mobility Multipurpose Wheeled Vehicle in both Army and Marine Corps service.

The Army selected Wisconsin-based corporation Oshkosh Corporation to receive the $6.7 billion contract for an initial production of 16,901 vehicles, most of which will be going to the Army. In the long term, the contract’s value could be as much as $30 billion for a full production run of almost 55,000 vehicles. Oshkosh’s winning design — which the company calls the Defense Light Combat Tactical All-Terrain Vehicle, or L-ATV — beat out entries from Humvee manufacturer AM General and defense giant Lockheed Martin. The JLTV program comes at a time when contract opportunities are shrinking due to sequestration and other defense cuts; it also represents a major evolution in what is expected of a “tactical truck” on today’s battlefield.

While the Army did not disclose why it selected Oshkosh’s vehicle over the other two entrants, the L-ATV does represent a middle ground between the AM General and Lockheed Martin designs. All three companies focused on passenger survivability and off-road capability. Lockheed’s design emphasized technological capability, developing systems to allow its version of the JLTV to punch above its weight with Hydra 70 rockets and Hellfire missiles. AM General touted an fully integrated communications suite. Oshkosh’s design features an “intelligent” fully independent suspension and an optional diesel-hybrid engine. Oshkosh also has a singular advantage over its competitors: it’s already producing vehicles similar to the JLTV. Oshkosh has built almost 10,000 armored trucks for the military’s Mine-Resistant Ambush Protected vehicle, or MRAP, program. It’s possible the Army decided that Oshkosh’s ability to fulfill its MRAP contract was a good indicator of its ability to maintain production for the JLTV. But it’s the genesis of the MRAP program that proved the need for the new JLTV in the first place.

The reason for all the technology present in the JLTV competition goes back to the Humvee, and its predecessor, the Jeep family of vehicles. Both were designed as light versatile trucks capable of performing a variety of roles, from cargo carrier and troop transport to mobile scout and ambulance. Neither vehicle was intended to resist much in the way of enemy fire, instead using speed and cross-country mobility. In conventional engagements during the invasion of Panama and the First Gulf War, the Humvee performed well. But the new asymmetric battlefield would force the Humvee into roles it was never intended for.

During the early years of Operation Enduring Freedom, Humvees were well suited to rough terrain of Afghanistan. But soon after the 2003 invasion of Iraq, a new threat emerged: improvised explosive devices. The Humvees were vulnerable; their flat hulls and thin armor provided little protection. Improvised armor offered some extra protection, and then official “up-armor” packages provided a little more. But neither could protect against IED strikes to the underside or from armor-defeating explosively formed penetrators. The add-on kits also added immense weight, which compromised mobility and increased the chance for rollover. A wholly new vehicle was required.

Faced with the growing death toll from IED strikes, the Department of Defense raced to implement the interim MRAP program. The DoD worked with several companies producing a number of designs to ensure that the urgent need for armored trucks was met. But the MRAPs had their own issues. Their extreme weight made them difficult to transport to the theater of operations and precluded them from being slung under or loaded into heavy-lift helicopters like the CH-47 Chinook or the CH-53E Super Stallion. The vehicles also had limited mobility, with low speeds, often being unable to operate off main roads, or drive over bridges not rated for its weight.

The multiple designs produced by multiple companies also made for challenging logistics. As operations in Afghanistan wind down, the DoD has worked to sell or scrap most of the MRAP fleet. The Army plans to keep around 8,000, while the Marines will store just over 2,500. Most of theseare Oshkosh’s M-ATV, the most nimble vehicle to come out of the MRAP program. The Humvees won’t be completely gone either, but their days in combat are likely over. The JLTV carries forward the MRAP legacy of survivability in the era of IED, but also attempts to restore the battlefield mobility of the Humvee. With this comes more advanced computer-controlled engines and safety systems. The Oshkosh L-ATV is much more of a weapons systems than the simple tactical truck it is replacing.

On paper, the Oshkosh L-ATV seems like a solid performer. But that can only be known for sure once it enters production 10 months from now. That start date may be delayed if either AM General or Lockheed Martin file protest over the JLTV selection. That’s a distinct possibility given that this is the largest land vehicle acquisition in almost a decade, and the meager landscape for future contracts. Whatever the outcome, it’s clear that that new combat norms have altered the face of light transport on the battlefield.