The Marine Corps wants as many of the new Joint Light Tactical Vehicles, the replacement for the Humvee, as it... 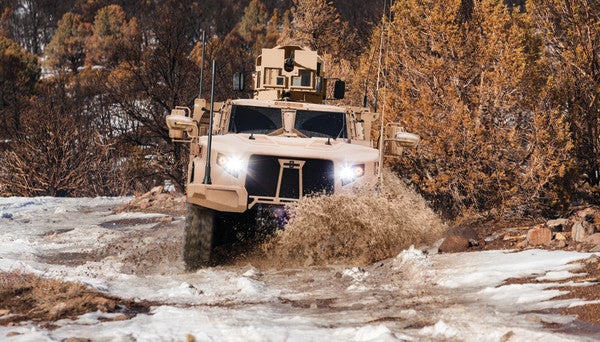 The Marine Corps wants as many of the new Joint Light Tactical Vehicles, the replacement for the Humvee, as it can get its hands on, according toa new in National Defense magazine.

OshKosh won the contract in 2015 to produce the JLTV to replace the Marine Corps and Army’s aging fleets of Humvees. That contract was for $6.7 billion to produce roughly 17,000 initial vehicles. In total, the program could result in as many 50,000 JLTVs.

“While the Marine Corps certainly has a need for aircraft of many types, the ratio of spending on aircraft compared to ground equipment is striking,” Tsongas said during the March 10 Marine Corps modernization hearing. Tsongas pointed out that the Marine Corps’ 2017 budget requested three times as much for aviation as it did for ground combat technologies.

“… I have some concerns about this ratio of spending on aircraft versus ground equipment, given the Marine Corps’ mission to be the premiere force in readiness and the historical reliance that the nation has placed on the Marine Corps’ role in ground combat,” she added.