The Marine Corps Is Ending The ‘Assaultman’ Infantry MOS. Here’s Why

In the last year, the Marines have seen a lot of changes: the graduation of the Corps’ first female infantry... 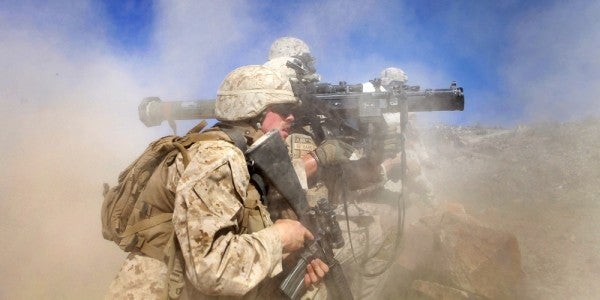 In the last year, the Marines have seen a lot of changes: the graduation of the Corps’ first female infantry officer; the addition of a fourth phase to boot camp; the service’s first supply of M320 grenade launchers; and news that the M27 will likely replace the M4 as the infantryman’s go-to rifle. Just three days into 2018, there’s more:

The Marine Corps plans to do away with the 0351 military occupational specialty — infantry assaultman — and phase out assault sections within rifle companies, Military.com’s Hope Hodge Seck reported today. The change is part of an effort to free up manpower for Marines to join other job fields.

Beginning in October, the Marine Corps “will no longer be producing 0351s” at either of its Schools of Infantry, Capt. Joshua Pena, a spokesman for the Marine Corps Training and Education Command, told Task & Purpose.

Assaultmen are tasked with tankbusting and breaching, which often means schlepping demolition charges, a 20-plus-pound Mk 153 Shoulder-Launched Multipurpose Assault Weapon (SMAW), and its 16-pound rocket across the battlezone. But nowadays “There’s no armor in Iraq and Afghanistan, so our original purpose just isn’t there,” Rylan McCollum, a former Marine assaultman who served with 1st Battalion, 6th Marines — first in Garmsir, Afghanistan, in 2008 and then in Marjah in 2010 — told Task & Purpose.

That dwindling niche role has made assaultmen something of a mystery to their fellow Marines. “I would say probably 99% of Marines don’t know what assaultmen are until they get to SOI,” McCollum said. “Nobody enlists as assaultmen. That’s not a thing you dream about as a kid.”

While grunts may be losing a job field centered around slinging rockets at enemy fortifications and armor, the Marine Corps won’t be losing that capability, Military.com reports. Future rifle companies will have a contingent of combat engineers attached to handle breaching and demolition — and they’ll also be packing SMAWs, until the Corps replaces the weapon system with the more versatile Carl Gustaf 84mm recoilless rifle.

As for the assaultman currently serving, they’ll likely be shuffled to another infantry field — something scores of 0351s have already been doing for years.

“I was essentially a reclassed rifleman who happened to carry around a fancier version of the AT4 that I never got to shoot,” McCollum said.

Though Marine infantrymen have traditionally been sorted into five core specialties — rifleman, machine gunner, mortarman, assaultman, and anti-tank guided missileman — the first few weeks of SOI training are the same across the board for all enlisted Marines in the 0300 field. Given the fast tempo at the nine-week Infantry Training Battalion course — and the overlap in training — assaultmen can learn the job of a machine gunner or rifleman with relative ease once they get to the fleet and begin prepping for a deployment.

Flexibility, of course, has always been an 0351’s job requirement. “We got turned into a mobile truck platoon,” Ian Miller, a former assaultman with 1/6 who did two downrange deployments, told Task & Purpose. “I was a .50 cal gunner for the first half, then when we pushed Kajaki, I got turned into a dismount, and I was involved in some of those firefights as an assaultman. But I never had a chance to fire my SMAW when I could have just used my rifle.”

The odd-job reputation of assaultmen — spend X months during pre deployment training on Y, then 7 months overseas doing Z — has been lampooned by members of the fieldfor years, serving as fodder for disgruntled smoke pit sessions by 0351s who saw their mission being handed off to Marines in other specialties.

“I don’t know if it was just underutilized at the time, or if it was systemic of the Marine Corps, but we didn’t do that job at all,” McCollum said. “We were trained at a very high standard at SOI, and then never utilized. And part of it was probably like, ‘Oh, we have engineers, and that’s part of their job.’”

The Marine Corps has been keen to ramp up its force size, shooting for a 12,000-troop increase this year — though the actual numbers, even with a boost from the 2018 defense budget, are closer to just 4,000, Military.com reports.

That’s where decisions like dissolving the 0351 field come in. By closing the MOS, the Marines can free up some 500 assaultmen for other infantry billets — and that means the service can focus on recruiting more Marines for MOS fields that take years of training, like cyber, intelligence, aviation, and ground vehicle maintenance.

The change is expected go into effect between 2021 and 2023. The Marine Commandant, Gen. Robert Neller, confirmed the plan to Military.com in December: “It's part of the calculus on anything you do, is how hard is it to bring it back if you cadre it.”

However, for those grunts who spent their dwell-time stateside prepping breaching charges or lugging rockets over uneven terrain in deserts abroad, the news that their career field will be closing its doors — at least temporarily — brings some understandable angst.

“That’s all well and fine, get rid of the MOS — but then you’re getting rid of all that grandfathered knowledge, learning, and experience,” McCollum told Task & Purpose.

“Sure, I didn’t do my job-specific thing very often, but I bet you could look back and see how many days mortarmen used their weapons,” Miller said. “I think it’s kind of short-sighted to say, ‘Assault doesn’t do their job, so it’s not useful.’”