“I feel a great sense of pride every time I put on that uniform and get on a horse.” 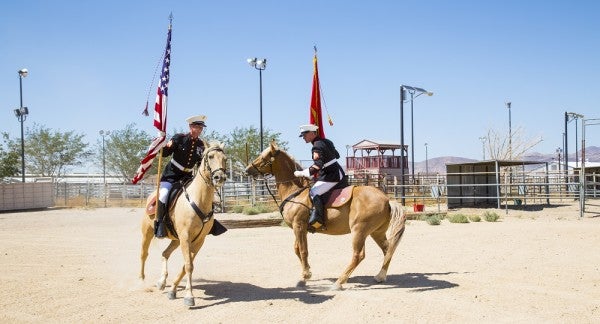 The Marines are the smallest and scrappiest branch of the armed forces, as any veteran of the Corps will proudly (and loudly) tell you. But even among the Marines, there are the few, the proud, the saddle-bound.

“I feel a great sense of pride every time I put on that uniform and get on a horse,” Staff Sgt. Nicholas Beberniss, the staff noncommissioned officer of the color guard, said in an Aug. 29 story released by the Corps.

The Mounted Color Guard participates in parades, ceremonies, and rodeos across the country. But given its size — just nine riders, or “stablemen” — the unit is often spread thin, traveling from coast to coast by truck and trailer.

“For me, the best aspect is all the traveling we get to do, and being in the rodeos and parades,” said Cpl. Alicia Frost, a stableman with the color guard and currently the only female Marine on the team.

“I’m the face for all female Marines,” she added. “So, when other girls and women see me doing it, I hope it gives them the courage to think that they can do it, as well.”

Marines can volunteer for the special duty, which lasts two to three years, regardless of their occupational specialty; the current team is a mix of infantry and non-infantry Marines. As long as they “have a bit of horsemanship and are pretty good in all disciplines of their MOS, chances of getting selected are pretty good,” Robert Jackson, a spokesman at Marine Corps Logistics Base Barstow, told Task & Purpose.

The horses, provided to the color guard from the Bureau of Land Management, are partially trained ahead of time by prison inmates at the Northern Nevada Correctional Center Wild Horse Training Facility in Carson City, Nevada.

“From there, they go through an inmate rehabilitation program, where the inmates get the horses to where they are green-broke, which means you can approach them, touch them, and touch their feet and so forth,” Sgt. Terry Barker, a Marine stableman explained in a Jan. 26, 2017, statement.

Yet the animals still need a lot of work before they’re show-ready, which is where the Marines come in.

The training involves bonding the Marines with their mounts, working in arenas and open spaces — while occasionally being interrupted by unexpected noises and distractions, so the mustangs can become accustomed to the sights and sounds they’ll encounter on the road and at events.

As with any job — in the Marine Corps, at least — there’s a lot of busy work. Think field-daying the barracks or picking up brass on the range is a pain? How about tending a stable hours a day, every day?

“It can be a very tedious job at times,” Frost said. “We work very long hours, most weekends and we usually don’t get holidays off. It’s a big responsibility and we devote our lives to the Marine Corps and the horses.”

Being the only Marines in the Corps able to spend the day galloping around on horses they helped train probably makes up for the hours spent cleaning a stable. Plus, being part of a small crew with a unique role is its own reward.