6 Marine Corps ‘Rules’ That Are Not Actually Regulations

"They're not *actually* regulations, sergeant major." 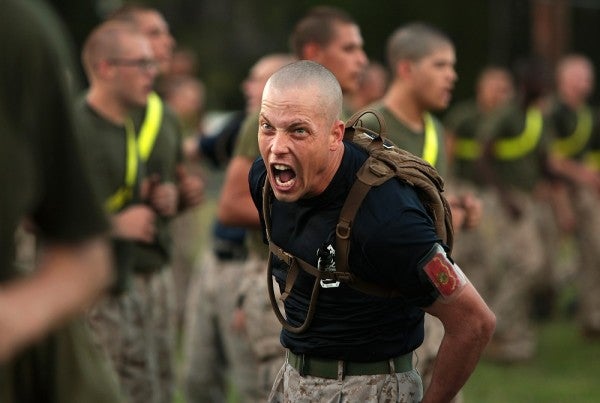 If there’s one thing the Marine Corps will never be in short supply of, it’s rules. There are regulations on how to lace your boots, what you can and cannot do while walking, what clothes you can wear while off duty, and numerous pages explaining how to wear your uniform or how your hair should be cut.

The Corps’ many rules are some of the things that sets it apart from other services by holding its Marines to a strict and very high standard.

But some Marines take this too damn far and adhere to orders, real or imagined, with dogmatic zeal. Violate any of these sacred regulations in their presence and you’ll be screamed at, publicly shamed, and generally berated for being a dirtbag.

However, there are a number of unofficial rules that aren’t actual regulations.

While you’re still likely to get chewed out for violating any perceived, or misunderstood, order, you can rest assured that Chesty Puller and Dan Daly aren’t rolling over in their graves because you stuck your hands in your daggum pockets.

Related: We need to stop making up uniform regulations.

To confirm what rules are actually service-wide regulations, Task & Purpose reached out to Headquarters of Marine Corps to ask about everything from reflective belts, skivvy shirts and issued running shorts, to haircuts, reserved spaces, and when it’s okay to walk on the grass.

You are not required to get a haircut every week.

This is a routine point of frustration and contention for many male Marines. The unwritten, but loudly spoken, rule is you need a fresh haircut every Monday, but the Marine Corps’ doesn’t actually require you do that. In fact, if your hair grows slowly enough, you can probably pull off a trip to the barber once or twice a month.

The order states that “men will be well groomed at all times,” and then goes into excruciating detail on style of fades, hair length — no more than three inches fully extended on the top of your head — and all the finer points about sideburns and tapering. But what the order is clearly lacking is a rule stating how often a male Marine must get his hair cut.

In an email to Task & Purpose, Capt. Dominic Pitrone, a Marine spokesman, cited comments from the Marine Corps Uniform Board, explaining that “Marines are required to maintain their hair within the grooming regulation standards. As such, they cut their hair as frequently as they need to in order to remain within the standards (for some Marines that means once a week, for others every other week, everyone is different).”

So, if you get a fresh haircut and it stays within the prescribed standard for a full month, then technically, you’re within regs.

Just don’t let your company gunny see you. Ever.

No, you don’t have to wear skivvy shirts in cammies.

According Paragraph 3036 of Marine Corps Order P1020.34G, which governs uniform regulations, wearing an olive-drab undershirt while in cammies is optional, though in the case of parades, formations, or ceremonies, it may be required for the sake of uniformity.

You know what that means. The next time it’s 95 degrees and muggy, let that silky-smooth chest or wiry mane of body hair breathe.

There’s no Corps-wide rule mandating you wear a reflective belt during PT.

While reflective belts have become a common sight in the military in the last 15 years, there is no standing Marine Corps order that mandates you wear one.

Citing the Corps’ Uniform Board, Pitrone explained that “the reflective belts are a base/facility safety issue and are worn per the commander’s guidance,” adding that “there is no Headquarters Marine Corps uniform regulation requiring their wear.”

If you’ve ever rolled up to work minutes before you have to be in formation, chances are you’ve noticed the rows of empty parking spaces reserved for company commanders, first sergeants, family readiness officers, and just about everyone else who can’t be bothered to show up on time, but wants prime parking when they arrive.

So why not take the spot? It’s not actually theirs anyway.

These signs are usually posted at offices or at the base exchange or commissary by the order of the base commander, and are for those of the determined rank, or expectant mothers, Pitrone explained in a phone interview with Task & Purpose.

However, it’s “not necessarily against the rules to park there, except that it’s the base commander’s rule and if you do it, somebody will tell you to move your car,” said Pitrone, adding, “There’s probably not a specific disciplinary action against it. It’s not like it’s in a document somewhere that’s legally binding.”

Unless of course you actually piss someone off enough that they take it to the base commander, but that’s a bit of a long shot.

You’re not required to wear issued PT shorts, but they do have to be green.

While green on green is standard for morning physical training, the issued shorts are incredibly uncomfortable due to the built-in lining that leads to chafing and frustrating bouts of jock itch. Fortunately, you don’t have to wear it.

According to Section 3023 of the uniform regulations, “olive green trunks of any material, similar in design to the standard issue trunks, may be worn at the option of the individual on all occasions for which the PT uniform is authorized/prescribed.”

So, if you’re tired of having Navy Corpsmen ask you if you’ve been riding dirty because you keep scratching your junk due to a bad rash, buy some non-issued shorts. Just make sure they’re the right color.

There’s no actual rule against walking on the grass.

I always thought this was a bit childish for America’s toughest service. If it’s quicker to get to your car by cutting across the grass, it doesn’t make sense to make a giant loop around a useless, albeit very well-manicured lawn.

Much like the rule on parking, “if the base commander has a sign saying don’t walk on the grass, it’s probably not legally binding,” said Pitrone over the phone. “I don’t think someone’s going to go to court martial over that kind of thing.”