Ah, Chuck Taylors: You know Converse’s venerable go-to footwear. Once a basketball-court staple, they’ve long since become the province of... 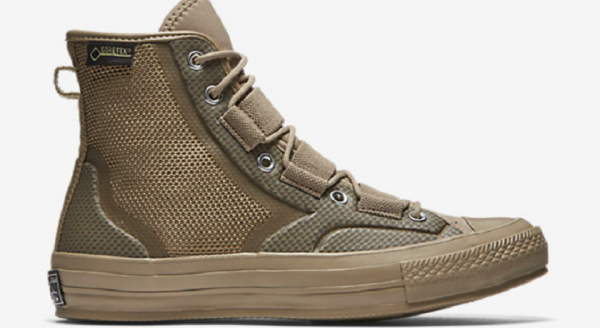 Ah, Chuck Taylors: You know Converse’s venerable go-to footwear. Once a basketball-court staple, they’ve long since become the province of hipsters, those angsty adolescents (and men in their 30s) who curse the corporate machine as they watch beard-grooming videos and do squats in skinny jeans to stretch out the inseam.

But Converse may be eyeballing a new cohort of consumers who I’ll call “vetsters” — a growing demographic of military veterans who dig the whiskey-from-a-mason-jar-drink’n chill of those hipsters, but can’t part with their cargo pants and combat boots.

Is that you? Then you’ll love the sorta mil-spec but still trendy Chuck 70 Utility Hiker in olive drab:

This new $150 pair of kicks was engineered for durability and, of course, tacticool style by the Massachusetts-based Nike subsidiary — which, as Military.com points out, made footwear for combat troops during World War II. According to the company website, the shoes come with bonded Gore-Tex seams for waterproofing; elastic material so they fit comfortably; military-inspired “textiles” for durability; a high-top fit so they’re more boot than sneaker; and reflective panels for visibility — because after forking over a bill-and-a-half, you’ll want people to look.

Though while these may look like combat boots, sprinting along a trail or stepping gingerly over rugged terrain wasn’t what they were made for.

The shoes are part of a new “Urban Utility Collection” that also includes a men’s Gore-Tex jacket, yours for only (cough) $400:

If you prefer olive drab over woodland or desert MARPAT, maybe that kind of scratch sounds like a deal, I guess. For everyone else: Try a pawn shop or surplus store near the base.

While sure to ruffle some lifers’ feathers, the military look, is hardly a new development in the fashion industry, this year or in any other. Earlier in 2017, Urban Outfitters launched its own take on the buffalo jacket — a go-to winter coat for troops — for its Central Issue Facility Fall catalog; Marine Dress Blue-inspired jackets have also made their way onto the racks at Banana Republic. And this is hardly the first time that a Nike brand has unveiled a mil-themed set of kicks. Just search “combat boot” on the company website and you’ll see what I mean.

Whatever you think about big brands leveraging military service to boost the bottom line, “almost a combat boot” isn’t the same as being a combat boot. There are some things a big brand can’t mimic — like that tangy aroma of foot cheese and medicated Gold Bond powder that wafts out of a pair of well-worn and moon-dust caked mil-issued boots.

That said, $150 is a lot cheaper than a four-year enlistment.