The Army may have chosen Sig Sauer’s P320 for its Modular Handgun System program over Glock’s offerings, but that doesn’t... 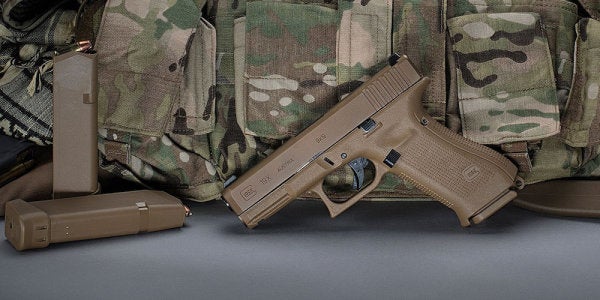 The Army may have chosen Sig Sauer’s P320 for its Modular Handgun System program over Glock’s offerings, but that doesn’t mean you have to: Glock plans on releasing a civilian variant of its 9mm Glock 19 pistol to civilian buyers this month, the company announced today.

Glock’s commercial pistol, dubbed the 19X, is the company’s first stab at a crossover model, combining the Glock 17 frame with a Glock 19 barrel. With a “marksman barrel” and ambidextrous slide-stop levers, the pistol is designed to be as versatile as it is powerful, “almost like a [1911] Commander-style situation where you’ve got the shorter barrel with the full-sized grip frame,” as national sales manager Bob Radecki told Army Times on Jan. 2.

Back in June, the Austrian gunmaker released photos of the 9mm Glock 19 and .40 caliber Glock 23 pistols offered up to the Army as part of the MHS program. But the company has now given the Internet a belated Christmas present of fresh new 19X photos:

We haven’t had the chance to review the Glock 19X ourselves, but the pistol is “likely to be most talked about firearm for 2018,” according to our (extremely knowledgeable) friends at The Firearm Blog, who had a chance to test-shoot the weapon prior to the public announcement. “This aberration of a Gen5,” reviewer Adam Scepaniak wrote, “allows for the capacity of their full size G17 magazines, more dexterity and positive handling, and accuracy in a smaller package.” Translation: Shut up and take our money.

Glock is certainly going hard with the hype around its MHS runner-up. “Our goal was to meet the demanding needs of the military while maintaining our standard of perfection,” Glock vice president Josh Dorsey said in the company’s Jan. 2 statement. “With proven testing results and fewer parts than our competitors’ pistols, the G19X has maximum efficiency, reliability and is easy to maintain.”

Related: Here’s Why Glock’s Protest Against The Army’s Handgun Award Was Thrown Out »

That statement is a clear dig at Sig Sauer’s P320, adopted by the Army as the M17/M18 and first fielded (and praised) by 25 soldiers with the 101st Airborne’s 1st Brigade Combat Team at the end of November 2017. After the Army announced the MHS award for Sig in January, Glock protested in a federal complaint that a shortened testing timeline put the Glock 19 at a disadvantage; though the complaint was thrown out in May, Sig’s P320 has been plagued by reports of safety defects from civilian law enforcement agencies.

Glock’s 19X pistol will arrive at select firearms dealers on Jan. 22nd, accompanied by a 17-round magazine, two 19-round magazines, and a case in the same plain coyote hue as the sidearm (the second time in the company’s history they’ve shipped a colored box, per TFB… which is cool, I guess). A Glock spokesman told Task & Purpose that while additional specifications of the pistol will be made available after the official launch, the suggested retail price of the Glock 19X is $749 with blue label pricing at $455.40.