Sig’s P320, The Army’s New Handgun, Is In Hot Water After Multiple Reports Of Safety Defects

Since winning the U.S. Army’s coveted Modular Handgun System competition back in January, things have been less than smooth sailing... 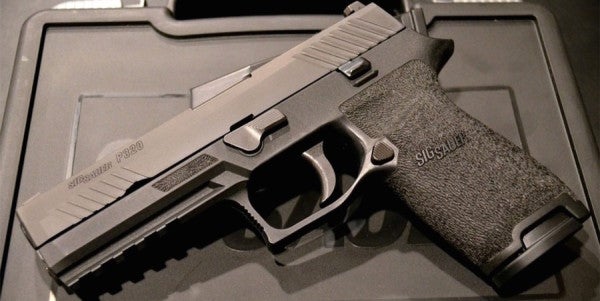 Since winning the U.S. Army’s coveted Modular Handgun System competition back in January, things have been less than smooth sailing for Sig Sauer. First, Sig’s primary MHS rival Glock lodged a protest with the U.S. Government Accountability Office in February, which was subsequently thrown out. Then in May, Steyr launched legal proceedings to sue Sig for patent infringement.

Sig’s problems worsened last week when online rumors broke suggesting that the P320 was prone to accidental discharges when dropped. Two videos have since emerged that show the Sig pistol firing when dropped. The first shows the pistol discharging when landing on its magazine base.

The second, from a gun store, Omaha Outdoors, shows the pistol firing when it lands on the rear of the slide assembly near the weapon’s striker.

Both videos clearly show the pistols’ trigger travelling rearward under inertia, suggesting that the mass of the trigger when jarred is causing it to move enough to trip the pistol’s sear. Omaha Outdoors’ video has racked up 90,000 views in just a day and the retailer have temporarily discontinue sales of the P320. The Truth About Guns have also subsequently replicated the test with similar results.

The Sig lacks a built in trigger safety like that used by its rival Glock; however, it is worth noting that the MHS -winning XM17 has a frame mounted manual safety which would theoretically prevent accidental drop discharges.

The situation took a serious turn on after a police officer filed a $7 million lawsuit against Sig Sauer after he was injured when his P320 accidentally hit the ground and discharged, hitting him in the left leg, according to Guns.com. Court documents show that the officer, an experienced member of Connecticut Police Department's Special Response Team, was injured in January and has claimed the weapon is not drop-safe. The report from Connecticut is the only accidental drop discharge so far reported to have caused injury. Stamford Police Department have subsequently shelved its duty-issue P320s because of the incident

The P320 is on the approved-carry lists of a large number of police departments including Dallas, Santa Barbara, and the North Dakota Highway Patrol. On Monday, Aug. 8, the Dallas Police Department also announced that they were removing the P320 from their approved-carry list pending an investigation into whether the pistol accidentally fires when dropped.

This isn’t the first time Sig have come under fire for faulty duty pistols. Back in April, New Jersey sued Sig Sauer for $2.5 million, claiming the company provided defective guns to state police. These pistols, however, were P229s not P320s. Sig claimed that it was the ammunition New Jersey police were using, not the guns themselves that were causing failure to extract malfunctions.

On Aug. 4, Sig released a statement responding to the building allegations of P320 drop-test failures, stating, “The P320 meets and exceeds all U.S. standards for safety, including the American National Standards Institute (ANSI) and Sporting Arms and Ammunition Manufacturers’ Institute, Inc. (SAAMI), as well as rigorous testing protocols for global military and law enforcement agencies.” Task & Purpose approached Sig for fresh comment but has not had a reply by the time of publication.

It seems that the weight of opinion has pushed Sig Sauer to acknowledge there is a problem with the P320. On Aug. 8, the company announced a voluntary upgrade program for the P320’s trigger. While Sig have not outlined what the modification will be yet; their most recent press release claims that details of this program on Aug. 14. The statement goes on to reaffirm that the P320 passed the ANSI and SAAMI tests and stresses that the unintentional discharges only occur when the P320 is dropped “beyond US standards for safety.”

Sig was keen to emphasize that “The M17 variant of the P320, selected by the U.S. government as the U.S. Army’s Modular Handgun System (MHS), is not affected by the Voluntary Upgrade.” It seems likely that the upgrade will be incorporated into pistols destined for the U.S. military.

While the P320 is the basis for the MHS XM17, it remains to be seen if the Army’s new pistol will suffer similar issues with drop safety. Task & Purpose will continue to bring updates as this story develops.