Legendary gunmaker Winchester is offering up the specialized ammo designed for the Army's new handgun for consumer purchase, the company announced on Monday 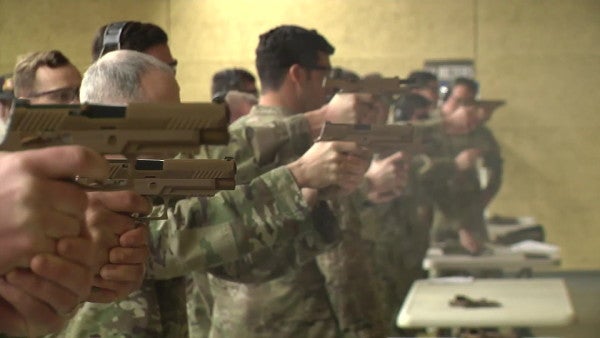 Legendary gunmaker Winchester is offering up the specialized ammo designed for the Army's new handgun for consumer purchase, the company announced on Monday.

Winchester said in a statement that it will offer the 9mm M1152 ammo originally developed for the Sig Sauer P320 that the Army adopted as the M17/M18 under its Modular Handgun System program in late 2017.

The company is releasing the ammo — which uses a 115-grain flat nose full metal jacket and was one of three types contracted for the new MHS along with the M1153 special-purpose jacketed hollow-point and M1156 drilled dummy inert round, as Guns.com notes — as an “Active Duty” training round.

“Winchester proudly developed M1152 to serve alongside the U.S. Warfighter and was selected as the sole source ammunition supplier for the United States Army Modular Handgun System (MHS) Program,” the company said in a news release. “Consumers can now use the same product selected by the U.S. Military for their training needs.”