The head-to-toe overhaul of Marine infantry arsenals that Commandant Gen. Robert Neller promised grunts last year is the gift that keeps on giving 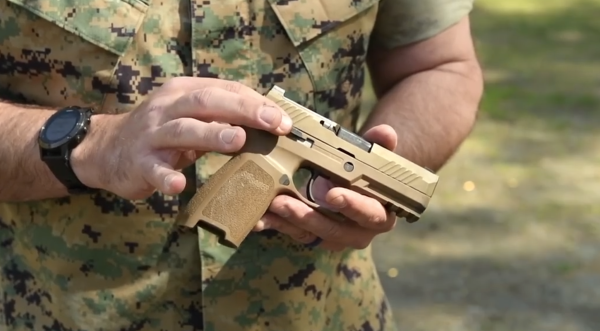 The head-to-toe overhaul of Marine infantry arsenals that Commandant Gen. Robert Neller promised grunts last year is the gift that keeps on giving: the brand new M18 service pistol, the Corps' first new standard-issue sidearm since the mid-1980s, is coming to armories starting next year.

Based on the Sig Sauer P320, the M18 is a more compact variant of the M17 service pistol that was developed through the Army's Modular Handgun System (MHS) program.

The M18 will replace the Beretta M9 adopted by the Marine Corps in 1985, as well as the selectively-fielded Glock 9mm M007 concealed carry and the beloved M45A1.

As part of its $17 million fiscal year 2020 budget request for infantry weapons, the Marine Corps ordered 12,184 M18s under the MHS program to supplement the 20,648 it procured last year, the first batch of which arrived in the Corps' hands in February 2019.

By March 2019, Sig Sauer had delivered some 5,000 M18s to the Army, Navy, Air Force and Marine Corps, Sig Sauer's Gabe Bailey told American Rifleman in April, noting that the Navy and Marine Corps “have received low quantities for training, demonstration and evaluation.”

The M18 “provides modularity and greater shooter ergonomics over the current models which will allow for more accurate fire for military personnel of different sizes,” as the Marine Corps's fiscal 2019 budget request put it at the time, a sentiment echoed in a video published in late April showing Weapons Training Battalion commander Col. Howard Hall rocking the M18 on a firing range at Marine Corps Base Quantico in Virginia.

A Marine fires the M18 service pistol at Marine Corps Base Quantico in Virginia on April 17, 2019(U.S. Marine Corps photo)

Hall also noted that the MHS has five unique safeties, four internal and one external — a nice selling point given the accidental discharges, frequent stoppages, and the ejection of live ammo that, detailed in a Pentagon report published in 2018, have plagued Sig Sauer's P320 since its adoption.

As Task & Purpose previously reported, both Pentagon and Sig Sauer officials are confident those issues are no longer a problem: the accidental discharges in particular were immediately addressed prior to fielding, and the Army planed to “develop a plan to retrofit any fielded MHS” with future engineering changes.

The M18 isn't the only new weapon soon to be in grunts hands starting in fiscal year 2020: the 40mm M320A1 grenade launcher will replace the Vietnam-era underslung M203 as Marine infantry squads' blooper of choice in the coming months. Between that and the Mk13 Mod 7 sniper system the Corps picked up last year to replace the M40 rifle, the Marines are wholeheartedly embracing James Mattis' beloved philosophy of delicious, delicious lethality with a vengeance.