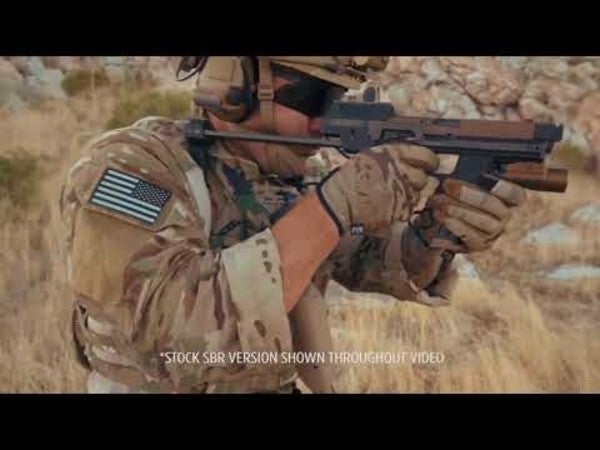 “Shoots like a carbine, holsters like a pistol.” That's the pitch behind the new Flux Defense system designed to transform the Army's brand new sidearm into a personal defense weapon.

The Flux Defense MP17 adds a retractable stock, a Picatinny rail, and a second magazine that doubles as a forward grip to the Sig Sauer P320 pistol the Army adopted as the M17/M18 under the service's Modular Handgun System program.

Working together, the stock and forward grip greatly enhance the pistol's control, range, and accuracy by allowing shooters to shoulder and fire their weapon like a rifle, while the extra magazine boosts the M17/M18's standard 17- or 21-round capacity to 43 rounds.

And rather than a timely conversion process, the MP17 appears elegantly simple: soldiers just slot their sidearm into the system in less than a minute and, thanks to a custom holster, quickly draw from their hip and handle the weapon with the ease of a standard pistol.

According to Flux Defense, the converted weapon is both smaller and lighter than most PDWs on the market, weighing just 2.8 pounds without ammo and measuring just 10.75 inches long with the stock collapsed (it's worth noting that Recoil pegs the average PDW length at around 10.3 inches).

Despite the allure of a nimble PDW conversion kit, the Army isn't necessarily on the lookout for one. In April, the Army awarded Swiss defense contractor Brugger & Thomet a $2.5 million contract to outfit the personal security details with the APC9K semi-automatic carbine.

But it's worth noting that at $399 apiece and a 43-round capacity, the MP17 presents a compelling alternative to the roughly $2,500-per-weapon price tag on the 30-round 9mm APC9K submachine gun (although, to be fair, the latter includes spare parts and accessories).

And even if the Army doesn't go for it, the other services might. As We Are The Mighty smartly points out, the MP17 could serve as a viable alternative to the collapsible 30-round GAU-5A Aircrew Self Defense Weapon that the Air Force recently adopted for pilot forced to eject in hostile territory, especially since the service recently tested the M17 as a potential sidearm for pilots.