The Army is once again angling for a new 9mm submachine gun for soldiers deployed in personal security details downrange,... 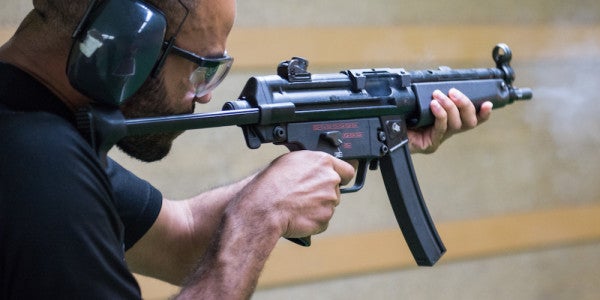 The Army is once again angling for a new 9mm submachine gun for soldiers deployed in personal security details downrange, after vacillating on the new sidearm over the last several months.

The service’s Product Manager for Individual Weapons on July 26 released a new call for Sub Compact Weapon (SCW) prototypes chambered in 9mm, with the goal of snagging 15 functional weapons along with various magazines (both 20-round and 30-round) and suppressors for use by PSDs assigned to “senior commanders and key personnel,” according to the special notice.

While the Army has a handful of MP5 submachine guns in its inventory already, PSD military personnel “require weapons with greater lethality than pistols that are more concealable than rifles,” the special notice states. “The ultimate objective of this program is to acquire a highly concealable Sub Compact Weapon (SCW) system capable of engaging threat personnel with a high volume of lethal force while accurately firing at close range with minimal collateral damage.”

The Army initially put out a call for SCWs back in May before abandoning its plans in July to “reassess its needs,” as The War Zone notes. In the interim, Army Contracting Command doled out just over $428,000 for 10 concealable SCWs “capable of engaging threat personnel with a high volume of lethal and accurate fires at close range with minimal collateral damage.” (Those contracts were all canceled in July.)

It’s unclear what’s changed in the few weeks the Army took to “reassess its needs” for a new submachine gun, although The War Zone offers a fairly compelling theory: Less than a week after scrapping the initial SCW program, a July 7 insider attack in southern Afghanistan took the life of Cpl. Joseph Maciel while he was providing security for personnel from the 1st Security Forces Assistance Brigade. With additional SFABs gearing up to head downrange, the Army likely wants to invest additional resources in safeguarding a crucial piece of its Afghan strategy.

So what will the next Army SCW look like? Well, those 10 submachine guns initially contracted back in June included Beretta’s PMX subcompact weapon, the Sig Sauer MPX, Colt’s CM9MM-9H-M5A modular subcompact weapon, and the Trident Rifles B&T; MP9 machine gun, among others. But as The War Zone notes, new requirements for collapsible stocks (instead of side-folding ones like the Sig Sauer MPX Rattler currently on U.S. Special Operations Command’s radar) cut the competition down to a handful of firearms, based on the H&K; MP5 that some lucky soldiers already tout downrange.

Whichever way the Army goes, soldiers will see the results soon enough: The service’s current roadmap for testing a next submachine gun has new SCWs in soldiers’ hands as soon as April 2019.