In early September, the Army doled out 1,111 upgraded 84mm M3 Carl Gustaf recoilless rifles to its soldiers and operators.... 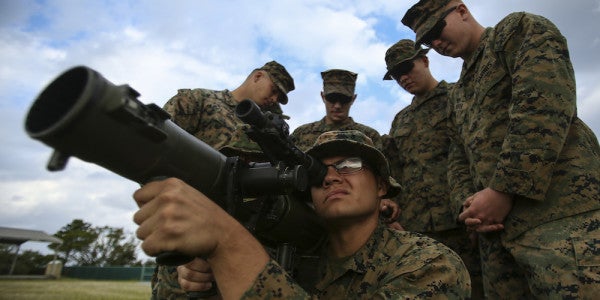 In early September, the Army doled out 1,111 upgraded 84mm M3 Carl Gustaf recoilless rifles to its soldiers and operators. Now, the Marine Corps is looking to get in on the bazooka goodness.

“Right now, we have a registered capability gap for multiple-effects rocket fire,” Chris Woodburn, deputy for the Marine Corps Capabilities Development Directorate’s Maneuver Branch, told Military.com. “So the Army and SOCOM have the MAAWS, and we are looking to get the resourcing we need to pursue the next iteration of MAAWS.”

After a year of testing by the Army Research, Development and Engineering Command, the Corps is now working with the Army to purchase its own arsenal of 1,200 Carl Gustafs from Swedish manufacturer Saab, MAAWS product director Kevin Finch told Military.com. Marines with the 31st Marine Expeditionary Unit, the Corps’ only continuously forward-deployed unit, tested new Carl M3E1 weapons systems on Oct. 25 at the Camp Hansen training area near Okinawa, Japan.

The M3E1 is certainly less cumbersome than its higher-powered predecessors; its reengineered titanium shell is a full 6 pounds lighter, but still laden with bells and whistles like a specialized automatic round-counter and an onboard ballistics computer. But the flexibility of multiple-effects rockets — set for airburst or proximity detonation though a customizable fire-control and fuze-setting system — is a major selling point for Pentagon planners. It helps that the M3E1 can outfire both the Corps’ current SMAWs and the PKM machine gun favored by insurgents downrange.

“The current system that the Army uses is the AT4, which only allows Soldiers to fire one shot, and then they have to throw the system away,” Randy Everett, Army project manager for the foreign technology program, said in a statement in September. “With the M3E1, Soldiers can use different types of ammunition which gives them an increased capability on the battlefield.”

It remains to be seen when the explosive new Carl Gustaf will actually tear up modern battlefields. Saab North America marketing director Jack Seymour told Marine Corps Times in October that the M3E1 still faces “roughly six more months of assessment” after its current testing and evaluation period. But while the Army is slated to field the M31E by 2023, Finch told Military.com that the Marine Corps could “jump on board” the contract as early as 2019.

That may seem like a long time from now, according to DoD product monkeys. But the firepower may be worth it. The best distillation of the awesome power of Carl Gustaf in the hands of a Marine comes from Chief Warrant Officer 5 Christian Wade, the gunner for 2nd Marine Division at Camp Lejeune and beloved firearm junkie. “The most important thing you could say to a Marine about the Carl Gustaf and SMAW is that, by putting a Carl Gustaf in his hand, he could have devastating effects on the enemy,” Wade told Military.com. ” [And] there's so many Carl Gustaf rounds that we haven't tested.”