“The job of a Corpsman is to go through hell and back for your Marines.” 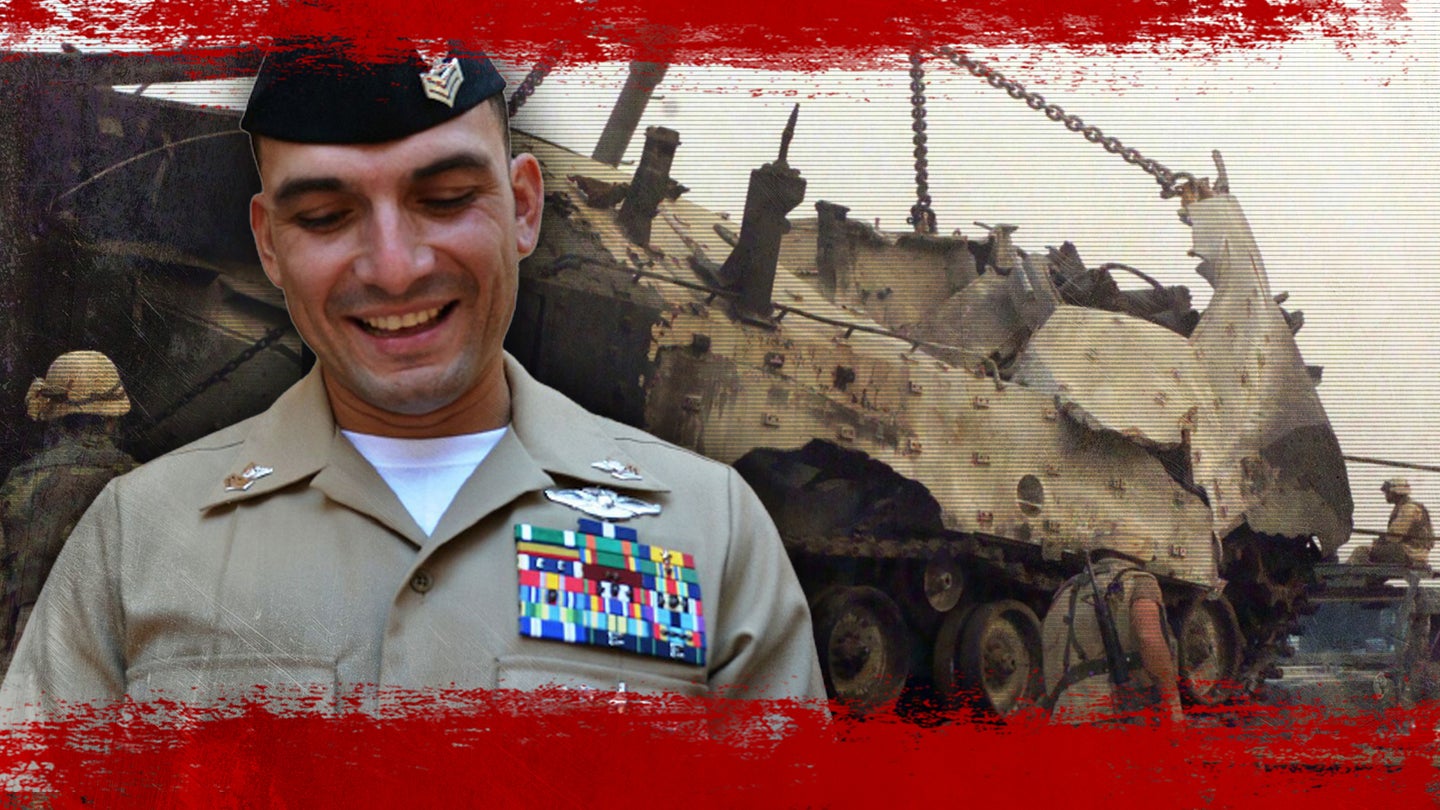 Feature image: A photo composite showing Petty Officer 1st Class Luis Fonseca overlaid onto an image of a damaged vehicle during the Battle of Nasiriyah, Iraq in March 2003. (Department of Defense.).
SHARE

Petty Officer 1st Class Luis Fonseca, the most decorated active-duty Corpsman in the Navy, has retired.

Fonseca said farewell to the service during a ceremony on May 14, about 18 years after his acts of heroism on March 23, 2003 — for which he was awarded the Navy Cross for valor, an award second only to Medal of Honor — when he was a 23-year-old seaman apprentice on his first deployment to Iraq during the Battle of Nasiriyah.

That day, Fonseca ran through a wall of lead. Not for accolades or to take a position from Saddam Hussein’s Army, which had yet to fully dissolve and transition into an insurgent force — one that would harry the U.S.-led Coalition in Iraq for years to come — but to save the lives of Marines. To save his Marines.

The battle, a major one at the outset of the war, pit roughly 5,800 Marines and sailors against a hybrid force of Iraqi troops who relied on a combination of conventional units, from infantry to armor and artillery, and irregular tactics to sow discord and hammer the American forces with salvos of rockets and mortar-fire quickly following an ambush.

The Battle of Nasiriyah was, in a word, brutal. But the Marines and sailors of Fonseca’s unit, Charlie Company, 1st Battalion, 2nd Marine Regiment, persevered, though it came at great cost. By the day’s end, 18 Marines from Charlie Company had fallen, and more lives would be lost before the battle was over, nearly a week later.

While assigned to an Amphibious Assault Vehicle Platoon with Charlie Co., Fonseca’s unit was tasked with seizing a bridge into the city of Nasiriyah. What at first seemed a straightforward mission, quickly devolved into violent chaos as all hell broke loose.

During the operation, an amphibious assault vehicle, called an ‘amtrac’ in the Corps, was hit by a rocket-propelled grenade and five Marines were wounded. Then the call went out, as it has on battlefields many times before and since: Corpsman up!

“The job of a Corpsman is to go through hell and back for your Marines,” Fonseca said in a November 2004 Department of Defense news release. “My brothers needed me, so I was going to be there for them.”

With his weapon in hand, Fonseca grabbed his medical supplies and rushed to the still-smoldering vehicle. The injured had been pulled from the wreckage, and incoming fire rained down. Fonseca quickly established a casualty collection point — an area of relative safety, or as safe as you can make it, where the wounded can be treated. And that’s what Fonseca did: he got to work.

“I noticed I had two patients with partial lower-leg amputations, one with flash burns to his eyes, and all had shrapnel wounds,” Fonseca said, in a 2008 Pentagon press release. “I applied tourniquets on the two Marines with the partial leg amputations and instructed the other Marines around to apply battle dressings on the others that were wounded.”

As Fonseca tended to the wounded, the battle raged all around them. He knew they couldn’t stay where they were: during a firefight, remaining still, or static, is deadly. In an interview with the Los Angeles Times several months after the battle, Fonseca reflected on the fighting, and the dangers he faced, saying he recalled thinking: “I know there’s a bullet with my name on it,” he said. “I’m gonna do my job until I get hit.”

Fonseca decided to move the injured to another amtrac that had been designated as a casualty evacuation vehicle for ferrying the wounded away from battle. But as he headed to the other amtrac to coordinate the evacuation, that too was struck by enemy fire and disabled. Fortunately, reinforcements soon arrived, as did another vehicle to take the wounded. But it was nearing maximum capacity and could take all but one Marine.

Eventually help arrived, and Fonseca handed off his last charge to other waiting Marines and Corpsmen. Yet the battle was far from over. Fonseca turned and headed back to the fight, rejoining his platoon, and his Marines, once more.

Once the fighting began to die down, a Marine in Fonseca’s unit, Gunnery Sgt. Myers, approached the young Corpsman. As Navy Times reported in August 2018, Myers had once said to Fonseca “I’m only going to tell you this once. I don’t like corpsman. Stay out of my way.”

But this time, “He came up to me and gave me a big hug,” Fonseca told Navy Times. “With pride in his voice, he said ‘Doc, you did one hell of a job. Oorah Marine!’ He became one of my biggest mentors.”

For his heroism and composure under fire, on Aug. 11, 2004, Fonseca was awarded the nation’s second highest decoration for valor, the Navy Cross.

“To be perfectly honest, being accepted by this tight-knit community … makes me more proud of who I am and what I do than the Navy Cross,” Fonseca said of those he cared for and fought alongside.

Years after that battle, Fonseca’s retirement ceremony was held on May 14 at Marine Corps Recruit Depot, San Diego, California, where he was assigned to Navy Medicine Readiness and Training Command, San Diego. Photos of the event were shared to the Navy’s official Facebook account, with the post celebrating the sailor as the Navy’s “most decorated active duty hospital corpsman.”

During the ceremony, Fonseca proudly wore his dress blue uniform displaying his red service stripes and chevrons. The intent, according to a recent Department of Defense news release, was to show that one’s mistakes don’t dictate their future. The wearing of red uniform stripes and chevrons dates back to past Navy regulations that stated only sailors with 12 consecutive years of good conduct were permitted to wear gold markings.

After nearly 22 years of service, Fonseca bid fairwell to the Navy during a joint retirement ceremony with his wife, Christina, who is also a petty officer first class and a Corpsman. In addition to the Navy Cross, the service confirmed that Fonseca received the following awards: 3 Navy and Marine Corps Commendation Medals; 2 Navy and Marine Corps Achievement Medal; 2 Combat Action Ribbons, which are awarded to those who have actively participated in combat in a given theater (it stands to reason that Fonseca received his first CAR for the Battle of Nasiriyah, and his second in Afghanistan); the Presidential Unit Citation; 2 Meritorious Unit Commendations; 2 Navy “E” Ribbons; 2 Good Conduct Medals; a National Defense Service Medal; Global War on Terrorism Expeditionary Medal; Global War on Terrorism Service Medal; Humanitarian Service Medal; 4 Sea Service Deployment Ribbons; a Navy and Marine Corps Overseas Service Ribbon; NATO Medal; Rifle Marksmanship Medal (Expert); Pistol Marksmanship Medal (Expert); as well as campaign medals for both Afghanistan and Iraq.

Yet even in light of all the accolades, it’s Fonseca’s humility, his formidable drive, courage, and above all, his undying devotion to his Marines that stands out most. It’s a perspective that was hard-earned, and one likely shared by those who have seen violence and death up close, yet carried on in spite of the fear they undoubtedly felt:

The President of the United States of America takes pleasure in presenting the Navy Cross to Hospitalman Apprentice Luis E. Fonseca, United States Navy, for extraordinary heroism in action against the enemy while serving as Corpsman, Amphibious Assault Vehicle Platoon, Company C, First Battalion, Second Marines, Regimental Combat Team TWO, Task Force Tarawa, First Marine Expeditionary Force, in support of Operation IRAQI FREEDOM on 23 March 2003. During Company C’s assault and seizure of the Saddam Canal Bridge, an amphibious assault vehicle was struck by a rocket-propelled grenade inflicting five casualties. Without concern for his own safety, Hospitalman Apprentice Fonseca braved small arms, machine gun, and intense rocket propelled grenade fire to evacuate the wounded Marines from the burning amphibious assault vehicle and tend to their wounds. He established a casualty collection point inside the unit’s medical evacuation amphibious assault vehicle, calmly and methodically stabilizing two casualties with lower limb amputations by applying tourniquets and administering morphine. He continued to treat and care for the wounded awaiting evacuation until his vehicle was rendered immobile by enemy direct and indirect fire. Under a wall of enemy machine gun fire, he directed the movement of four casualties from the damaged vehicle by organizing litter teams from available Marines. He personally carried one critically wounded Marine over open ground to another vehicle. Following a deadly artillery barrage, Hospitalman Apprentice Fonseca again exposed himself to enemy fire to treat Marines wounded along the perimeter. Returning to the casualty evacuation amphibious assault vehicle, he accompanied his casualties South through the city to a Battalion Aid Station. After briefing medical personnel on the status of his patients, Hospitalman Apprentice Fonseca returned North through the city to Company C’s lines and to his fellow Marines that had been wounded in his absence. His timely and effective care undoubtedly saved the lives of numerous casualties. Hospitalman Apprentice Fonseca’s actions reflected great credit upon himself and upheld the highest traditions to the Marine Corps and the United States Naval Service.