UNSUNG HEROES: The Corpsman Who Ignored His Own Wounds In An IED Attack

Chief Petty Officer Justin W. Wilson joined a short list of heroes Nov. 25 when he was awarded the Navy... 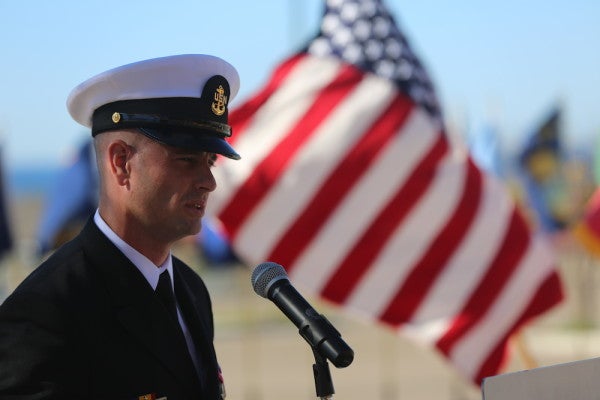 Chief Petty Officer Justin W. Wilson joined a short list of heroes Nov. 25 when he was awarded the Navy Cross Medal for conspicuous gallantry in combat.

In September 2011, Wilson was on patrol in Helmand province, Afghanistan, with two Marines assigned to Marine Special Operations Team 8113, an element of Marine Special Operations Command. Wilson was with two Marine staff sergeants — Christopher Diaz, a military working dog handler; and Nicholas Sprovtsoff, an explosive ordnance disposal technician. Their mission was to patrol the area near an Afghan police checkpoint and search for improvised explosive devices.

In searching for the bombs, Sprovtsoff stepped on a pressure plate, and an IED exploded. He was severely wounded.

According to an official military account of the event, Wilson ignored his own safety and his own welfare in the aftermath of the explosion to provide aid to Sprovtsoff, who was severely wounded. He did this “knowing the enemy’s tactic of emplacing multiple IEDs in proximity,” his award citation says.

Wilson was joined by Diaz and other unidentified team members in rushing to aid Sprovtsoff, ignoring their own safety in the process. When a secondary IED did indeed explode, Sprovtsoff and Diaz were fatally wounded, and Wilson was badly injured.

But, according to military and media reports, Wilson ignored his injuries and continued to attempt to provide medical aid to his fellow service members.

And for that, Wilson was awarded the Navy Cross, the Navy and Marine Corps award for heroism in combat second only to the Medal of Honor.

In being recognized for his actions, Wilson joins a couple of other distinctly short lists. Wilson is a Navy Corpsman, specially trained sailors who attach to Marine Corps units to provide medical support. Though they are often in danger, it is quite rare for corpsmen to receive a medal this prestigious for gallantry under fire. He also becomes one of the first Navy Cross recipients in the Marine Corps’ relatively new special operations element, MARSOC, which was activated in 2006. Wilson is the first sailor in the eight-year history of MARSOC to receive the Navy Cross, according to Stars and Stripes. A Marine Corps report lists him as the eighth total MARSOC service member to receive the award.

“A Marine in trouble always looks for that corpsman,” Osterman said, according to a Stars and Stripes report. “Chief Wilson today epitomizes that heroism and true selflessness that we all depend on as Marines, to save our lives.”

Diaz and Sprovtsoff were also posthumously awarded Bronze Star Medals with valor devices for their actions that day. In his remarks at the ceremony, Wilson recognized their character as warriors.

“Some people tell me I’m lucky to be alive, to walk out of that,” Wilson said. “I’ll tell you, I’m lucky to have served with them. They made me a better person.”