While conducting village stability operations in the Upper Gereshk Valley, of Helmand province Afghanistan, a Marine Special Operations Team with... 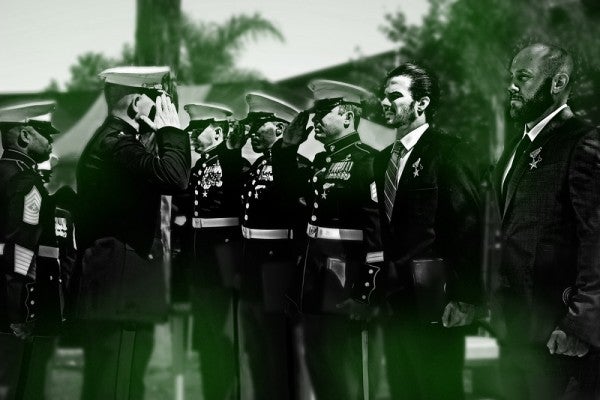 The initial volley sparked a gunbattle that would rage for a full two days.

On the morning of June 14, 2012, the Marine special operations team was in a village compound when it came under heavy enemy fire. Immediately, the team leader and one other Marine were severely wounded, according to a Department of Defense press release.

In the aftermath of the ambush, each member of the team was credited with playing a critical role in securing the casualties, administering lifesaving medical care, and in fighting off the enemy attack.

Related: UNSUNG HEROES: The Green Beret who killed 4 enemy fighters, 1 with his hands »

Sgt. Ryan K. Pass reached the wounded Marines first, scaling a ladder to the roof and providing first aid. Staff Sgt. Christopher W. Buckminster, exposed himself to enemy fire as he verified targets and marked their position. Meanwhile, Gunnery Sgt. Brian C. Jacklin began organizing a counterattack and a casualty evacuation. Jacklin contacted a nearby supporting unit and coordinated air, direct, and indirect fire support and readied his men to cross a field to secure a landing zone for a casualty evacuation.

“When surrounded on all sides by seven to eight times our numbers, we faced what seemed the inevitability of death as we attempted the day-time (casualty evacuation) of our grievously wounded,” said Jacklin, during an award ceremony for the team’s actions.

When he recounted the firefight, Jacklin said he asked his teammates: “Does anybody have a problem with risking it to take these guys out of here? Because if we don’t, they are going to die here.”

The response was unanimous. They were all in.

Buckminster, Staff Sgt. Hafeez B. Hussein, and Gunnery Sgt. William C. Simpson ran across open ground to where the injured Marines were located, taking enemy fire along the way. They provided first aid until Navy Petty Officer 1st Class Jordan Walker, the team's corpsman, arrived to quickly stabilize the wounded men so they could survive transport to the evacuation site.

As this was happening, the enemy closed within 100 meters of the Marines’ position.

Buckminster, Hussein Pass, and Simpson carried the casualties across to a landing zone devoid of cover. When the team arrived, Walker positioned himself between the casualties and the direction of the enemy fire, effectively acting as a human shield for his wounded comrades.

As the helicopters approached the landing zone to evacuate the wounded, the Marines and supporting units fought to secure the landing zone, with Jacklin “raining M203 grenades on the enemy and directing the fires of his team” until the landing zone was secured, reported Marine Corps Times.

After the casualties were safely evacuated, the remaining Marines continued fighting well into the night, and when their relief finally arrived, Jacklin and Sgt. David E. Harris volunteered to stay behind and help.

The two Marines carried on their fight for the next 24 hours.

For his bravery and composure under fire, Jacklin was awarded the Navy Cross during a ceremony on April 9, 2015, at Camp Pendleton, California, where he and five other Marines there that day were recognized for their bravery. Buckminster, Harris, Hussein, Simpson, and Sgt. William P. Hall were awarded the Bronze Star Medal for valor.

According to the Department of Defense press release, both Pass and Walker were unable to attend the ceremony but are expected to be awarded for their actions. Pass will receive a Bronze Star for Valor, and Walker will receive a Silver Star Medal.

“Not a man before you here today skipped a beat in their commitment to seeing their injured brothers home,” said Jacklin during the ceremony. “All or nothing. Death or glory. These men before you charged out into the heaviest barrage of fire I’ve seen in over 10 years of heavy combat to get the job done.”