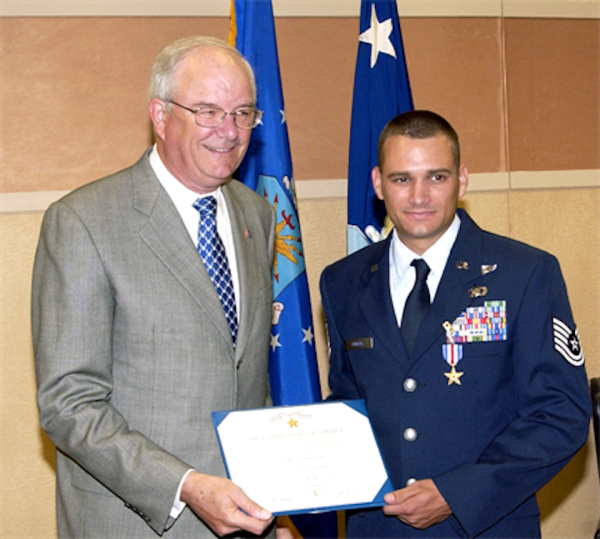 On April 4, 2003, less than three weeks after the U.S.-led invasion of Iraq began, Tech. Sgt. Travis Crosby, a tactical air control party specialist (TACP) attached to the U.S. Army’s 3rd Infantry Division found himself at the tip of the spear into Baghdad.

Crosby’s unit was responsible for the seizure of Objective Peach, a critical six-lane concrete bridge spanning the Euphrates River that served as the only feasible avenue of approach to the Iraqi capital, which was still under Saddam’s control.

As Crosby approached the bridge, his vehicle came under a barrage of enemy artillery, mortar, small arms fire, as well as anti-tank missiles. The Republican Guard was dug in and ready for a fight.

“At first, the sound of bullets flying and bombs hitting really unnerve a person,” Crosby later told an Air Force reporter. “Then shell shock sets in, and although you know all of those dangers are around, you can work through them and do what needs to get done.”

And work through them he did. As the bombs and bullets continued to rain in, Crosby spotted a group of Iraqi soldiers attempting to detonate demolition charges on the bridge. So he directed an A-10 to strafe their position.

After the A-10 killed the enemy soldiers and saved the bridge, Crosby called for another A-10, directing it to provide life-saving cover for a team of Army engineers in the river, who were then able to cross.

However, it wasn’t until Crosby reached the Baghdad side of the bridge that the real battle began. There, Crosby’s vehicle was ambushed again, but this time at extremely close range, and by an enemy force that included three tanks, numerous vehicles, and dismounted infantry.

Surrounded, Crosby began hammering the enemy with his .50 caliber machine gun, killing over 20 soldiers, while simultaneously directing precision strikes by a flight of A-10s that succeeded in destroying the tanks.

But there was still much more work to be done, beginning with a pair of Republican Guard soldiers who charged Crosby’s vehicle on foot. Drawing his handgun, Crosby leapt from the vehicle and dropped both soldiers from a distance of 10 feet.

“I had to engage two people with small arms,” Crosby told the Air Force reporter. “It was only afterwards that I was told that I had killed three more people. Just knowing there were more people dead in a ditch who were intent on killing me really shocked me.”

The battle for Objective Peach lasted 20 hours and marked a decisive point in the push to gain control of Baghdad. For his actions that day, Crosby received the Silver Star, the nation’s third highest award for valor in combat.

At the award ceremony, Crosby played down his battlefield heroics, saying that he was simply “real good at getting out of bad situations.”