UNSUNG HEROES: The Iraqi Interpreter Who Became A Marine 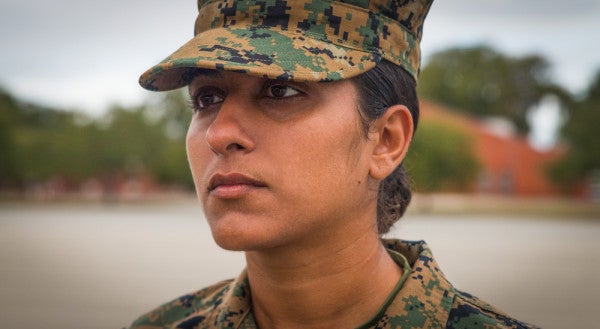 When Aseel Salman stepped onto the yellow footprints at Marine Corps Recruit Depot Parris Island, South Carolina, on July 22, 2013, she took another step down a long road of service to the United States.

Like many new recruits there that day, Salman was a long way from where she grew up. A really long way.

Salman was born and raised in Baghdad, Iraq, and was going to college at the University of Baghdad in 2003 when she first encountered the United States military, reports a Department of Defense news release.

After an American service member was shot, the other soldiers needed an interpreter to help with the investigation, and Salman, who speaks English and Arabic, stepped up to help. From 2003 to 2007, Salman worked with the American military in Iraq, using her dual-language skills as an interpreter.

While recruit training is designed to push and challenge prospective Marines, Salman may have had a leg up on her peers. During her time as a military interpreter she went on numerous raids with American troops.

“The first two years were the hardest,” said Salman. “Going straight from school to the checkpoint every day, and sometimes staying overnight was hard.”

Salman said there were too many stories to count, but there was one that stands out to her to this day.

“We went out on a raid once, and I went into a house with three women in it,” said Salman. “I asked if they knew where this man was, and they all said no. Then, one woman whispered to me that she knew where he was and to meet her outside. Once outside, she warned us, saying ‘be careful, they are across the street with five loaded AK-47s.’ We later caught them.”

Salman grew up in all-female family, but with no males present, her mother and three sisters felt ostracized by their community, she said.

“I hated being looked down upon just because we didn’t have a male family member around,” said Salman, who graduated boot camp on Nov. 15, 2013. “I joined the Marines to prove to myself and my family and my people that I can do something great and amazing.”

Salman decided to leave Iraq in 2007 due to increased threats of violence against interpreters, and applied for a special visa for immigrants who assisted the U.S. overseas. She arrived in the states on Dec. 22, 2008 and settled down in Houston, Texas, with her husband, a military contractor she met while in Iraq.

Salman was inspired to serve by her husband, who also served in the Marines, and on June 6, 2013, she decided to enlist. She turned 30 the very next day.

“I could not have thought of a better way to spend my last day as 29,” she said.

Salman’s age difference and experience set her apart from her fellow recruits, many of whom had never been away from home for long periods of time, or been under near-constant stress, a hallmark of Marine Corps recruit training.

“When she first got here, she stepped back and observed,” said Sgt. Sylvia Washington, one of Salman’s drill instructors. “Once the senior made her guide, she really took charge; we really depend on her for a lot of things.”

While her road has been a long and difficult one, Salman remains optimistic and hopeful.

“I believe that everything happens for a reason and that I was supposed to be with these girls,” she said.