This Heroic National Guardsman Risked His Life To Rescue A Woman From A Flaming, Exploding Wreck

An Army National Guardsman’s heroism on the side of a Charlotte, North Carolina freeway last week has earned him widespread... 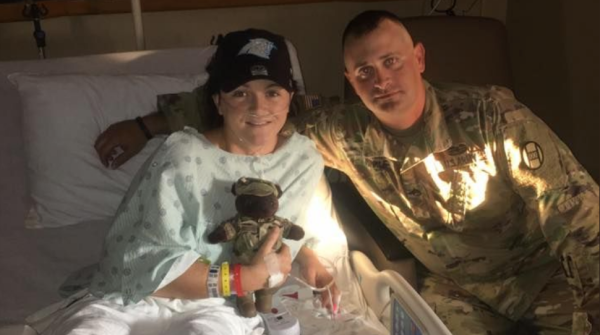 An Army National Guardsman’s heroism on the side of a Charlotte, North Carolina freeway last week has earned him widespread acclaim, and with good reason.

As Staff Sgt. Cory Hinkle was on his way home, he happened to witness a head-on collision on Boiling Springs Highway in Shelby, on Sept. 18, reports Fox News.

“I saw the cars in front of me just slam into each other and dust and smoke go everywhere,” Hinkle told local news station WBTV.

A veteran of the Iraq war, Hinkle’s training immediately kicked in as smoke billowed from one of the vehicles. Hinkle pulled off to the side of the road and made his way to the wreck, where he saw one of the drivers, 28-year-old Brandy Guin, trapped inside with a broken ankle.

Related: The Soldier And His Sons Who Saved A Teenage Car Accident Victim »

Hinkle pulled Guin from the vehicle as it caught fire, and a bad situation took a dramatic turn for the worse.

“As the fire started to spread in my car, the shocks started to explode and hot debris was flying everywhere,” Guin told WBTV from her hospital bed. But it’s what Hinkle did next that has caught the attention of so many.

“He shielded me with his body and said ‘It’s going to have to go through me to get to you,” Guin said.

Hinkle covered Guin with his body as metal debris flew past. One piece struck him in the ankle, leaving it swollen.

Soldier rescues a local woman from burning car, shields her body from the explosion. @WBTVGoodNews has the story » https://t.co/sTGBflE0Eq pic.twitter.com/GKovZFY24H

“I’ve been in the military for 15 years,” Hinkle told the Shelby Star. “It’s instinct for me. I made the decision right then that if something came off the car, it’d have to go through me first.”

Since the accident, Hinkle has visited Guin in the hospital where she is recovering from a broken ankle and a facial fracture, reports the Shelby Star. The other driver in the accident has been charged with traveling left of center on the road.

“It takes a lot for a person to lay down their body and protect someone they’ve never met. There’s not a lot of people out there like him,” Guin said. “Those soldiers know how to step up.”