A Marine on track to become the branch’s first female infantry officer has managed to overcome the obstacles that have... 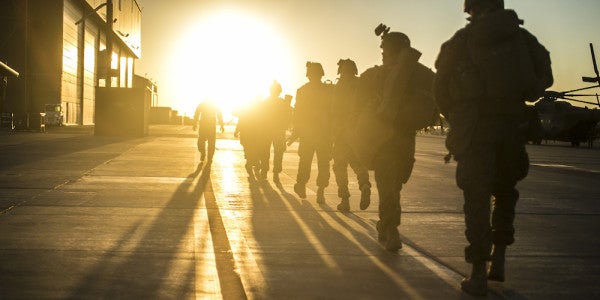 A Marine on track to become the branch’s first female infantry officer has managed to overcome the obstacles that have felled her predecessors since the Corps opened its notoriously intense 13-week course to women in 2012, several Marine Corps officials told Task & Purpose.

The unidentified Marine lieutenant has advanced further through the branch’s grueling Infantry Officer Course than the 30 female officers who preceded her in the last five years, sources told Task & Purpose. If she prevails through to her class’s projected graduation date of Sept. 25, she’ll join the ranks of the hundreds of male officers who conquered the secretive training pipeline before her.

“She’s completed all of her tactical movement requirements,” Capt. Joshua Pena, a spokesman for the Marine Corps Training and Education Command that oversees the IOC pipeline, confirmed to Task & Purpose. “As far as I know, she’s gotten further than any other female candidates up to this point.”

Since March 2016, when the Department of Defense signed off on the Corps’ gender-integration blueprint, 248 women have joined units that were previously exclusive to male service members, a Marine Corps Manpower and Reserve Affairs spokesman told Marine Corps Times on Aug. 10.

The most recent female officer to attempt the IOC did so in both April and August 2016, crushing the initial Combat Endurance Test that has thwarted candidates in the past, Military.com reported in early August. But that candidate eventually dropped out of the pipeline after failing two of the course’s six graded tactical-movement exercises.

According to Marine Corps requirements obtained by Task & Purpose, the brutal slogs range between 6.4 and 9.3 miles with weight loads of up to 152 pounds, as of October 2016. It is unclear if those requirements were changed following the previous candidate’s two attempts earlier that year.

According to a side-by-side comparison of Marine Corps and Army officer training hikes regimen, updated in October 2016, the IOC maneuver requirements are far more intense than those faced by even the elite Army Rangers.

Though perhaps as intense as the SEAL Officer Assessment and Selection that saw its latest female candidate wash out in early August, the 86-day IOC is considered the most grueling training regimen in the Corps and among the most challenging training courses for U.S. infantry troops.

“It’s essentially [The Basic School], but on steroids,” an active-duty Marine and recent IOC graduate who declined to be identified told Task & Purpose. “It’s the varsity level for a lot of skill sets, techniques and procedures that are refined through the most mentally, physically, psychologically and emotionally challenging situations you’ll ever experience.”

According to retired Army Col. Ellen Haring, who critiqued the IOC requirements just weeks before the Corps updated its comparison in October 2016, the Corps’ criteria have been a “moving target,” designed to screen out ambitious female candidates by front-loading the Combat Endurance Course to the start of the pipeline and emphasizing physical strength over other traits with outsized weight requirements.

Infantry Officers Course 2-15 students carry a casualty away from a simulated Improvised Explosive Device explosion while on patrol during Talon Reach V at Range 220, March 26, 2015

“It weeds out potentially smart people who can’t carry heavy loads,” Haring told Task & Purpose. “Why would an officer be a donkey for the organization? Is that what the Marine Corps wants out of officers?”

Regardless of the current standards, the success of the first female infantry officer in the IOC would represent a “watershed moment” for both gender-integration advocates and a Corps that’s faced a bruising year of sexism and controversies, according to retired Marine Lt. Col. Kate Germano, who was relieved of her command of a training battalion at Parris Island in June 2015 amid claims she created a “toxic” climate.

“The minute she is handed her certificate of course completion, it will become real to women Marines that if they commit themselves to being stronger, faster, and tougher, they truly can achieve success in any job in the Marine Corps,” Germano told Task & Purpose. “She will have earned her place with every step she took and every drop of sweat she shed, and once other women see she was able to do it, they will follow.”

While the unnamed lieutenant may have overcome the biggest obstacle for her fellow female IOC candidates so far, she still has one more major challenge ahead: PALMFEX, the multi-objective live-fire exercise conducted at Twentynine Palms in California that marks a “culminating event” for all aspiring infantry officers. But for a pipeline like IOC, even success there doesn’t mark a final victory.

“On the last day of the course, you can assume that you are not always guaranteed graduating,” the recent IOC graduate told Task & Purpose. “I give that as advice to every single person: You think that the day is over and you can lay your head down, but it’s only begun. That's just the nature of war.”