Maria Daume, one of the first female Marines to enlist into the Corps on an infantry contract, made history March... 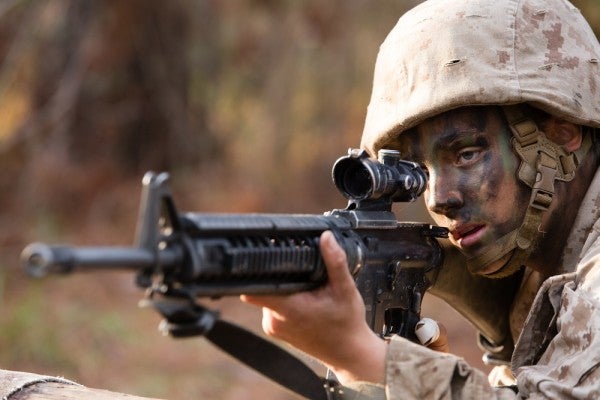 Maria Daume, was born in a Russian prison and brought to Long Island, N.Y., at the age of 4 when she and her twin brother were adopted.
SHARE

Maria Daume, one of the first female Marines to enlist into the Corps on an infantry contract, made history March 23 when she graduated from the School of Infantry East at Camp Geiger, North Carolina. Daume is the first female Marine to join the infantry through its traditional training pipeline; she’ll join the Fleet Marine Force as a mortarman, one of the combat arms fields opened to women last year. But her remarkable story began 18 years ago and 6,000 miles away, in Russia.

Daume and her twin brother, Nikolai, were born in a prison in Siberia, where their mother was incarcerated. When the twins were 2 years old, their mother died, and they lived in an orphanage in Moscow until they were adopted by an American family living on New York’s Long Island.

Related: She Was Born In A Russian Prison And Became A US Marine. The Infantry Is Next »

Daume distinguished herself at the School of Infantry, where her training included scaling 56-inch walls in full gear, lifting 80-pound weapons systems overhead, and moving a 200-pound “simulated casualty” dummy to safety, according to VOA News. Not to mention a 12-mile hike while carrying her 60mm mortar system and four rounds.

“She was right at the top of the pack,” Sgt. Matthew Schneider, a mortar instructor at the School of Infantry, told VOA in an interview.

A lifelong athlete, mixed martial artist, and competitive spirit, Daume said her decision to enlist in the infantry came down to one thing: She wanted to personally clobber America’s enemies.

“I want to fight ISIS,” Daume told Task & Purpose in an interview in January. “Even though everybody in the military fights, I want to be a grunt. I think everything about it is for me, and I want to prove that females can do it.”

Now, she’ll have her chance.

The battalion’s nickname is “the magnificent bastards.”