“Whenever we have an opportunity not to go to Twentynine Palms, that’s great.” 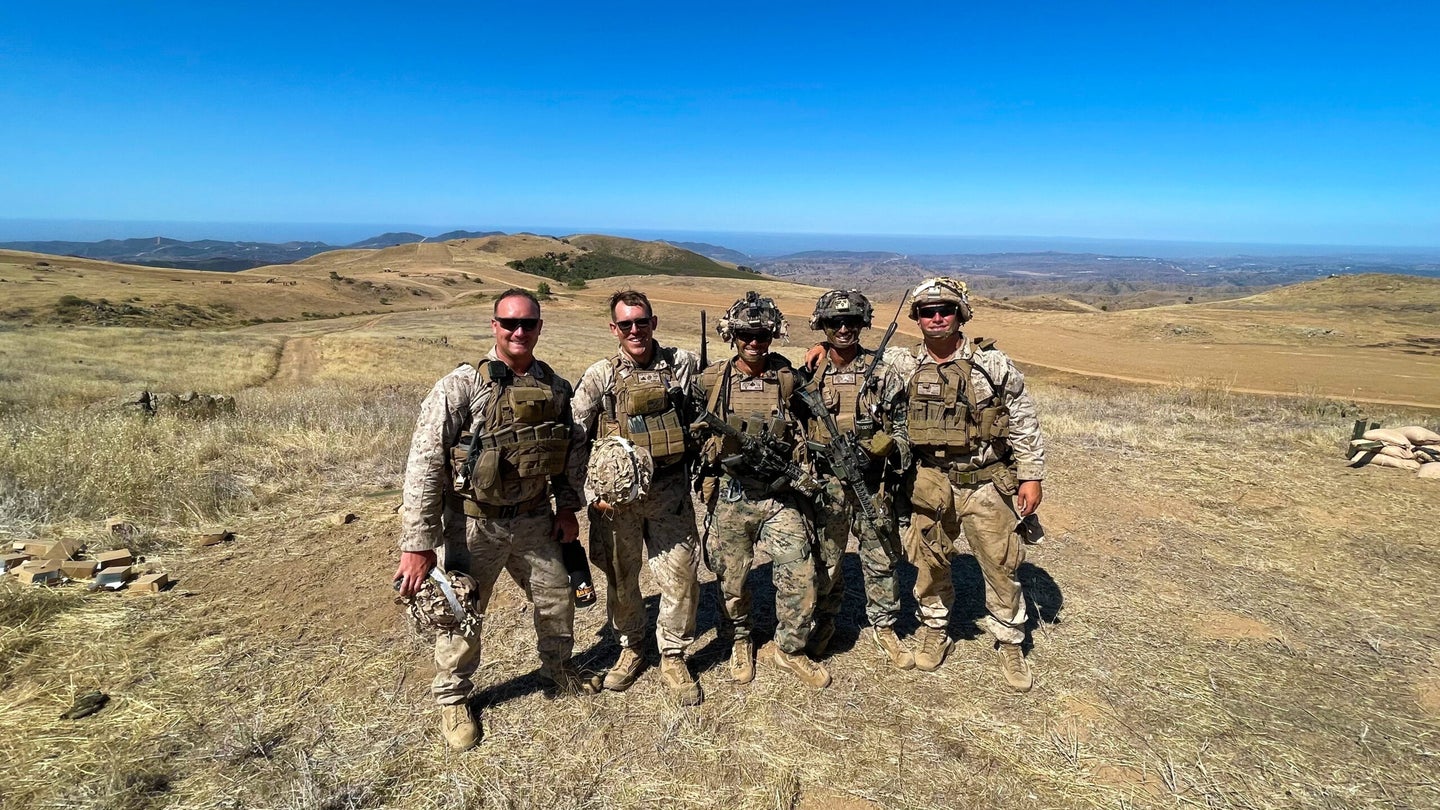 A Marine infantry company ran through Camp Pendleton’s newest training range on Tuesday against the backdrop of the Pacific Ocean and the potential island battle scenarios that lay beyond.

Top 1st Marine Division leaders were on hand to observe the opening of the training area high in the hills above the base, an existing range that was improved upon by members of the 1st Combat Engineer Battalion in recent months. Before a ceremonial ribbon was cut — fittingly, with a Marine Ka-Bar — the division’s commanding general, Maj. Gen. Roger Turner explained why he was excited about the new range and talked about what Marines can expect.

“We’re measuring ourselves against the pacing adversary,” Turner said of the Chinese military and other “near-peer adversaries” with advanced capabilities such as Russia, Iran, and North Korea. “You create a competitive advantage through training.”

Hundreds of Marines from Golf Company of the 2nd Battalion, 5th Marine Regiment then ran through what has been dubbed Range 800, a new combined arms and maneuver area designed to train infantry platoons in attacking enemy defenders as machine guns and mortars fire in support of their advance. Officials say the new range gives Marines at Pendleton a smaller version of a “notorious” range in the desert of Twentynine Palms known as 410A.

“This is a direct comparison to 410 Alpha,” said Lance Cpl. Alexander Plum, a 30-year-old machine gunner. “Whenever we have an opportunity not to go to Twentynine Palms, that’s great,” he joked of Marine Air Ground Combat Center-Twentynine Palms in the California desert, which many Marines refer to by the slang 29 Stumps.

The range features three separate enemy trench lines that are set up in a typical 360-degree defensive posture. It allows a scenario of having a platoon of Marines patrol in a wooded area away from the objective before squad-rushing towards the trenches and firing at pop-up targets. At the same time, machine gunners can move through the hills around the target area to get in position and rain down automatic weapons fire as the riflemen advance.

“This is probably my favorite spot aboard Camp Pendleton,” said Gunner Keith Marine, the top weapons and tactics expert for the 1st Marine Division who was credited as the “chief architect” of the training area.

The Marines kicked off their attack on Tuesday with the firing of a Javelin, an anti-tank missile, which scored a direct hit on a notional enemy command and control node. Mortarmen then launched 60mm high explosive rounds toward the objective area and M240B gunners began suppressing targets for the riflemen negotiating concertina wire obstacles below.

“They breached!” one Marine repeatedly shouted to his colleagues as the machine guns blasted the targets with thousands of rounds of 7.62mm ammunition. “I can’t hear shit!” another screamed back.

Eventually, as riflemen advanced toward the trenches, the mortar fire stopped and machine gunners shifted to other targets so Marines could move safely and get close enough to lob grenades. Once in position in front of trench one, a grunt fired an AT-4 rocket as Marines cheered and fired rifles until the targets dropped for good. Others swarmed the second trench and captured it. Finally, trench three was taken and motorized targets representing enemy reinforcements moved in until finally, the area was dubbed “secure.”

“There’s nothing like this at Pendleton,” said Sgt. Johnny Doe, a 29-year-old mortar section leader with 2/5’s Fox Company.

Range 800 is a welcome complement to the various training ranges on the sprawling 125,000-acre base. Turner pointed to Range 409 as an example, which can be tough for units to reserve since the training area plays host to infantry units as well as light armored reconnaissance units firing the 25mm chain gun from their LAV-25 vehicles and assault amphibious vehicle units getting trigger time on several heavy weapons.

“This is a range that will be more exclusive for the infantry companies,” Turner said. The general added that other ranges have restrictions on what Marines can do and what weapons they can fire but said Range 800 “is pretty permissive.”

Marines can live-fire most of what is standard in the infantry arsenal today, including .50 caliber machine guns and rifles; shotguns; pistols; 81mm and 60mm mortars; grenades; and demolitions. Notably, the use of demolitions was in part how the range was built, according to Maj. Matt Angel, operations officer for 1st CEB, who said that engineers saw boulders in their way and thought, “well, might as well blow ‘em up.” Shape charges blew them into a million pieces, he said.

The training area is the latest sign that the Marine Corps is looking ahead to a looming conflict with China. In March 2020, Marine Commandant Gen. David Berger released Force Design 2030, which ordered a perhaps risky divestment of tanks and artillery and a reduction in personnel in an effort to build a more agile Corps capable of sending small teams of Marines to establish beachheads on distant islands in the Pacific.

Now more than a year later, the infantry has gotten better gear, including new helmets, night vision, and tropical uniforms and boots; and upgraded and agile, “ultra-light tactical vehicles” to speed Marines around the battlefield should arrive by 2022. The infantry training schools behind the pipeline of the next generation of “grunts” are experimenting with a longer training course that will teach more advanced skills to Marines right out of boot camp. And infantrymen in the fleet are increasingly training as if they are fighting an enemy that has lethal drones, fighter aircraft and bombers, and advanced sensing equipment designed to hunt and kill American command and control sites.

“We focus on the PRC [People’s Republic of China] as the pacing adversary,” Turner told Task & Purpose in an interview, adding that Beijing could someday pose an “existential threat” to the United States. “We obviously don’t want that but we need to train for it.”

Marines who served prior to 9/11 may notice parallels to the tactics of the 1980s and 1990s when they were training to take on the Soviets. Grunts these days are weaving camouflage netting into their helmets, painting their weapons, and using ghillie blankets in an effort to deceive Chinese satellites and aircraft outfitted with thermal sensors that pick up body heat. Many are using tactics to operate against a technologically advanced enemy after being inspired by the release of standard operating procedures in November 2020 explaining how Marines can reduce their “physical signature.” Another manual goes on to detail how infantry battalions can reduce their “technical signature” of communications and electronic signals that would stand out to advanced enemy sensors.

“Those little things mean a lot,” Turner said, explaining that his subordinate units have been ordered to trim down from the bulky, easily-targeted combat operations centers of the wars in Iraq and Afghanistan to “super low profile,” typically with camouflage netting and a couple of small, stealthy vehicles. Some Marines are even testing how they can “frustrate” an adversary’s collection capabilities by digging dummy fighting positions and setting up fake artillery positions similar to the Ghost Army of World War II. “Deception is a huge thing,” he said.

“It’s interesting how the Marine Corps is changing,” said Plum, the machine gunner, who noted that he and his fellow grunts were now training “using everything we got against everything they got.”

Berger’s “new strategy should be familiar to students of Marine Corps history — seizing islands in the Pacific to serve as bases from which to strike the enemy,” as Carl Forsling wrote. “The twist is that now it’s called Expeditionary Advanced Base Operations (EABO), and the Marines will use weapons such as Tomahawk missiles and eventually future systems to threaten enemy shipping and other targets.”

They will first learn how to operate in such a challenging environment here at Camp Pendleton. Or as the Navy chaplain put it in prayer before the training began, they “will hone their skills” here in California, “so at the will of their commander, they’ll unleash hell.”