Retired Army Maj. Gen. Robert Scales hates the M16 family of rifles, and he won’t stop until everyone knows it.... 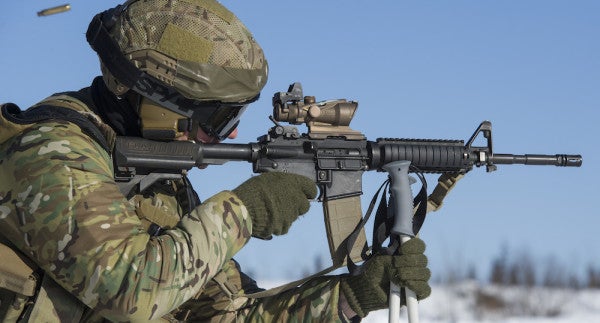 Retired Army Maj. Gen. Robert Scales hates the M16 family of rifles, and he won’t stop until everyone knows it.

Scales has spent the last few years railing against the standard-issue infantry rifle as little more than a lighter but less effective version of the infamous M16 model that left so many American troops dead in the jungles of Vietnam (In response to Scales’ condemnation of the M4 in the pages of The Atlantic in January 2015, Task & Purpose’s Christian Beekman mounted a vocal defense of the rifle).

Wednesday was no different. Appearing before the Senate Armed Services Committee, Scales decried the Department of Defense’s post-World War II small-arms programs as “inferior.” Thousands of American troops “have died because the Army’s weapon buying bureaucracy has consistently denied that a soldier’s individual weapon is important enough to gain their serious attention,” said Scales in his prepared testimony.

“A soldier in basic training is told that his rifle is his best friend and his ticket home,” he told assembled lawmakers. “If the lives of so many depend on a rifle why can’t the richest country in the world give it to them?”

After testifying about the issues that plague the M16 and M4, Scales offered his interpretation of what the next‐generation, all‐purpose infantry rifle should look like. Here are his requirements:

Multiple weapons can now be assembled from a single chassis. A squad member can customize his weapon by attaching different barrels, buttstocks, forearms, feed systems, and accessories to make, say, a light machine gun, a carbine, a rifle, or an infantry automatic rifle.

The military must change the caliber and cartridge of the guns it gives infantry soldiers. [American firearms designer Eugene] Stoner’s little 5.56‐mm cartridge was ideal for softening the recoil of World War II infantry calibers in order to allow fully automatic fire.

But today’s cartridge is simply too small for modern combat. Its lack of mass limits its range to less than 400 meters. The civilian version of the 5.56‐mm bullet was designed as a “varmint killer” and six states prohibit its use for deer hunting because it is not lethal enough to ensure a quick kill.

The optimum caliber for tomorrow’s rifle is between 6.5 and 7 millimeters. The cartridge could be made almost as light as the older brass‐cased 5.56‐mm by using a plastic shell casing, which is now in final development by the Marine Corps.

The Army can achieve an infantry version of stealth by attaching newly developed sound suppressors to every rifle. Instead of merely muffling the sound of firing by trapping gases, this new technology redirects the firing gases forward, capturing most of the blast and flash well inside the muzzle. Of course, an enemy under fire would hear the muted sounds of an engagement. But much as with other stealth technology, the enemy soldier would be at a decisive disadvantage in trying to determine the exact location of the weapons firing at him.

Computer miniaturization now allows precision to be squeezed into a rifle sight. All an infantryman using a rifle equipped with a new‐model sight need do is place a red dot on his target and push a button at the front of his trigger guard; a computer on his rifle will take into account data like range and “lead angle” to compensate for the movement of his target, and then automatically fire when the hit is guaranteed. This rifle sight can “see” the enemy soldier day or night at ranges well beyond 600 meters. An enemy caught in that sight will die long before he could know he was seen, much less before he could effectively return fire.

The result of these much-needed upgrades, according to Scales? “Greater precision, greater reliability, greater killing power.” And despite concerns of defense spending, he believes the biggest obstacle to outfitting American infantry with the small arms they deserve actually the “turgid acquisition gurus” who run the Pentagon’s procurement process.

To their credit, DoD officials are moving slowly but surely to outfit ground forces with new weaponry. In November, the Marine Corps’ 3rd Battalion, 5th Marines began conducting pre-deployment exercises to evaluate the M27 Infantry Automatic Rifle as a replacement for the M4, which replaced the M16A4 in infantry battalions in 2015.

It’s not just the Corps inching toward a small-arms update. Scales’ testimony comes just months after the Army announced it would purchase Sig Sauer’s version of the Modular Handgun System to replace the M9 Beretta. And in early May, the U.S. Army’s small-arms experts laid out a blueprint for the branch’s future that includes fielding the new M3A1 and a new automatic rifle that would replace the M249 squad automatic weapon for certain units — although those changes likely won’t take place until 2025, according to Military.com.

For Scales, the future of infantry small arms is not just an issue of tactics or strategy — it’s an issue of morality. And by ignoring small arms in favor of expensive sea and air-based weapons systems, the Pentagon is making a moral calculation it will regret for generations.

“A Naval Academy graduate goes through a year and a half to two years of flight school, he’s qualified in the F-18. He then goes to carrier trials; he then becomes a qualified pilot, and he flies a $75 million piece of machinery,” Scales told Task & Purpose in August 2016. “Is his life more valuable to his parents than that 18-year-old kid with a high school GED who just got shot between the eyes because the enemy’s got a better weapon than him?”