'Particularly with the global situation going to hell, let’s get these weapons in the hands of close combat soldiers.' 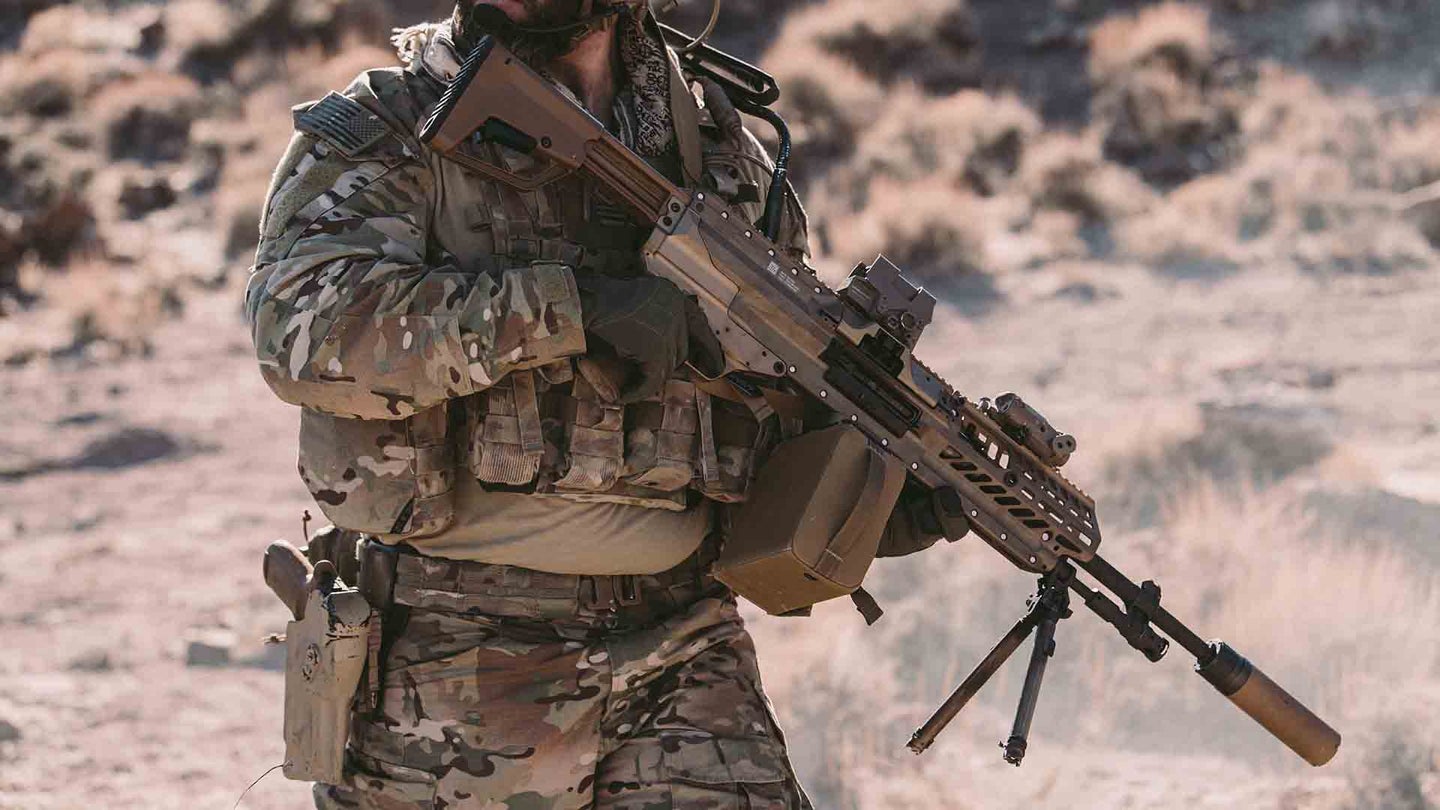 Sig Sauer's submission for the Army's Next Generation Squad Weapon light machine gun weighs 12 pounds and has an effective range of greater than 1,000 meters. (Photo courtesy of Sig Sauer.).
SHARE

After nearly five years of development, the Army could be just weeks away from selecting the design for its Next Generation Squad Weapon to replace the M4 carbine and M249 machine guns currently in the hands of ground combat soldiers.

The Army expects to award a contract by April for two Next Generation Squad Weapon models and the 6.8 mm ammunition that they chamber, Army officials said. The service is currently considering two designs: Sig Sauer has submitted one design and LoneStar Future Weapons, owned by True Velocity, is the prime contractor for the other. Each company has offered submissions for an automatic rifle and machine gun variant of the Next Generation Squad Weapon.

By June, the Army should have a better idea of when it will start fielding the new weapons, service officials said. First, the Army will have to work with the company that wins the contract to determine how long it will take to manufacture the weapons and ramp up production of 6.8 mm ammunition.

The two weapons that come out of the Next Generation Squad Weapon program will be fielded to soldiers who are in frontline military occupational specialties classified by the Army as the “Close Combat Force,” which include infantry, cavalry scouts, combat medics, forward observers, combat engineers, and special operations forces, Army officials said.

It is not yet known which units will be first to receive the weapon, service officials said. Soldiers who are not in the Close Combat Force will continue to use M4s and M249s.

The road to providing troops with a new infantry weapon has been long. It has been more than four years since Gen. Mark Milley, then serving as the Army’s chief of staff, told lawmakers in May 2017 that the 5.56 mm rounds chambered by M4 carbines, M16 rifles, and M249 machine guns could not penetrate some types of modern body armor, especially since “adversarial states are selling that stuff on the Internet for about 250 bucks.”

Initially, the Army sought to address this challenge by looking for a commercially available weapon that chambered a 7.62 mm round to serve as the service’s interim rifle, but the Army abandoned those efforts in October 2017 and shifted its funding toward finding a long-term replacement for soldiers’ M4 carbines and M249 machine guns.

Scales, who served on the Defense Department’s Close Combat Lethality Task Force that was established by then-Defense Secretary James Mattis, described the 6.8 mm round as “the optimum caliber for close combat” between 50 and 600 meters. It flies at a supersonic velocity longer than the 5.56 mm round, making it more accurate; and it is much more controllable than 7.62 mm rounds on fully automatic fire, said Scales.

“Amid hunters and soldiers, the truth about the mid-caliber weapon is almost universal and not disputed by anyone,” said Scales, who added that he had hoped the Next Generation Squad Weapon would have been fielded in 2020.

“Particularly with the global situation going to hell, let’s get these weapons in the hands of close combat soldiers,” Scales said.

While the U.S. military appears full speed ahead with the NGSW program, longtime observers of the DoD acquisition process remain skeptical. Ian McCollum, a gun expert and host of the “Forgotten Weapons” YouTube channel, recently told Task & Purpose that the 6.8 mm round may be problematic for infantry weapons.

“It’s massively high pressure,” McCollum told Task & Purpose during SHOT Show 2022. “And it has some benefits in terms of penetration, armor perforation, that sort of thing – but is it realistic to develop a standard infantry rifle with the durability to really sustain a long service life with ammunition that’s that high pressure? I’m pretty dubious.”

But Sig Sauer’s designs for the Next Generation Squad Weapon’s rifle and light machine gun variants both are designed to handle chamber pressures that would have been unimaginable several years ago, said Ron Cohen, the company’s president and chief executive officer.

In fact, the Sig Sauer designs allow soldiers to fire up to 12,000 rounds before the barrels need to be changed, while the Army calls for M4 barrels to be replaced after 6,000 rounds, Cohen said.

By using such a high-pressure round, Sig Sauer was able to extend the range and lethality of both the Next Generation Squad Weapon rifle and machine gun without extending the weapon’s barrel or using a heavier round, he said. The extra range is important, consideringU.S. troops in Iraq and Afghanistan often engaged enemy forces distances greater than 500 meters.

The steel and brass case designed by Sig Sauer allowed the company to nearly double the pressure per each round without making the bullet bigger, Cohen said. That dramatically increased each round’s range to more than 1,000 meters while keeping weight down. Sig Sauer’s machine gun design weighs 12 pounds, compared with 18 pounds for an M249 and 28 pounds for an M240 machine gun.

Meanwhile, Sig Sauer’s design for the Next Generation Squad Weapon-Rifle, known as the MCX-Spear, weighs in at about 8.3 pounds, Cohen said, and that makes it slightly heavier than an M4, which typically weighs about 7.3 pounds.

The MCX-Spear also has quite a bit of recoil. Task & Purpose executive editor Jared Keller ended up with several bruises from the rifle digging into his side after he fired 20 rounds during a June 2021 demonstration. Cohen insisted the MCX-Spear has less of a kick than weapons chambered in 7.62 mm.

The other design vying to become the Army’s Next Generation Squad Weapon from LoneStar Future Weapons utilizes a “bullpup” configuration, in which the magazine is behind the trigger control assembly, allowing soldiers to have a longer barrel without extending the overall length of the weapon.

Another innovation is the composite 6.8 mm ammunition made by True Velocity, which is an average of 30% lighter than an average 7.62 x 5mm cartridge, he said.

“We can achieve the target velocities while keeping our chamber pressure at a very normal operating level,” said Pat Hogan, a spokesman for True Velocity, LoneStar’s parent company.

Task & Purpose video producer Chris Capelluto found that the weapon’s suppressor and free-floating barrel that moves backwards with each shot did a good job at absorbing most of the recoil, even on full automatic. However, the fact that the barrel moves could hurt the weapon’s accuracy.

Hogan said that the LoneStar designs include a reciprocating barrel as part of the recoil mitigation system, “But it’s worth noting that the barrel movement is almost imperceptible to the shooter.”

Overall, the bullpup design would provide troops with a lightweight and compact weapon with greater effective range than the infantry weapons they currently have, Hogan said.

“The functionality of the weapon – being fully ambidextrous, being compact, and having a patented recoil mitigation system that is second to none – those are some of the features that are truly going to make this weapon stand out to the guys who are actually using it on the battlefield,” Hogan said.

Whichever company wins the competition, the Pentagon hopes that the Next Generation Squad Weapon will provide soldiers with extra firepower at a time when both ‘great power’ competitors like China and Russia are more aggressively challenging the United States and terrorist groups show no signs of going away.