To paraphrase the legendary military theorist Carl von Clausewitz: Everything in small arms is simple, but the simplest thing is... 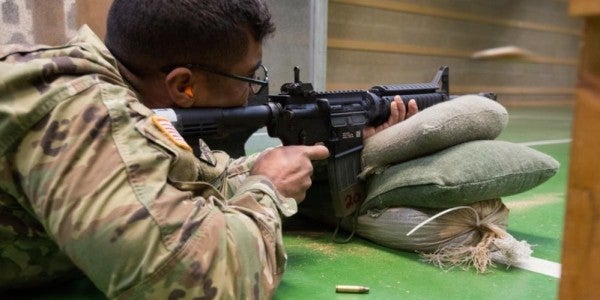 To paraphrase the legendary military theorist Carl von Clausewitz: Everything in small arms is simple, but the simplest thing is difficult.

Army Chief of Staff Gen. Mark Milley has waged a relentless war against the Department of Defense’s acquisition process (hereafter referred to as “purgatory”) to replace the decades-old weapons currently in soldiers’ kit with new pistols and other small arms. So far, he’s had some major successes on the pistol front with the Army’s adoption of the Sig Sauer P320 as the XM17 to replace the M9 Beretta as the branch’s sidearm of choice.

But finding an upgrade for the M4 carbine has proven a more elusive challenge. In November, the Army’s plans to purchase a 7.62 mm off-the-shelf rifle as an intermediate solution finally gave up the ghost after months of budget-related uncertainty.

Now, the Army is currently evaluating a rifle that could actually be fielded relatively soon, Milley said Wednesday at an Association of the United States Army event in Crystal City, Virginia.

“There have been some research and testing done down at Fort Benning, [Georgia] and with industry partners that indicates that we could — it’s possible — have a rifle in the hands of American soldiers or Marines in the not too distant future — I don’t want to put a timeline — that can reach out at much greater ranges than currently exist with much greater impact or lethality and with much greater accuracy,” Milley said.

The rifle’s increased lethality can be attributed to the type of ammunition it uses, its chamber pressure and its optics, Milley said at AUSA’s Institute of Land Warfare breakfast. He did not reveal any specific information about the rifle, such as whether it chambers a 5.56mm or a 7.62mm round or if it is fully automatic, like the M27 infantry automatic rifle used by the Marines.

“It’s an excellent system,” Milley said. “They’ve done some proof of principles on it. It is real. It is not fantasy and industry is moving out quickly and we expect that, with appropriate funding, we should be able to have this particular weapon in the not too distant future – I won’t define what ‘not too distant future’ is.”

Although Milley said that soldiers currently have a rifle capable of matching adversaries anywhere in the world, the problems with the M4 and M16 have been well documented.

Scales has long advocated that the Army needs a rifle with a solid action — such as the Heckler & Koch HK416 — in which all the recoiling parts operate together as a single system. The Marines currently use the HK416 as the M27.

Ideally, the Army’s rifle should fire a round between 6.5mm and 6.8mm, which is highly accurate because it retains supersonic velocity longer than existing military calibers, and it also generates less recoil so fully automatic fire is more stable, he said.

The Army’s next rifle should also include a suppressor, because troops initially fire at muzzle flashes and sounds of gunshots in a close fight, Scales said.

“As near peer adversaries like Russia and China continue to expand their military capabilities, we can no longer afford to sacrifice modernization. From rifles, to shipbuilding, to missile defense, it is critical that the U.S. maintains a competitive edge over countries that wish us harm,” Sen, Joni Ernst, R-Iowa, said Wednesday in a statement to Task & Purpose.

“The 2018 National Defense Authorization Act included my amendment to authorize the expedited procurement of a commercially available off-the-shelf item for a 7.62mm rifle, and as a member of the Senate Committee on Armed Services, I will continue pushing for our military to have the tools they need and have asked for to complete their missions and remain lethal.”

For the time being, soldiers will have to wait until the Army can develop and field an M4 replacement. It is unclear whether the enemy will wait until the new rifle is ready.