The Army is testing a ‘smuzzle’ that reduces machine gun noise, flash, and recoil at the same time

Army researchers are working on combining the control of a muzzle brake with the relative silence of a suppressor to help soldiers maintain quiet, accurate fire on the battlefield 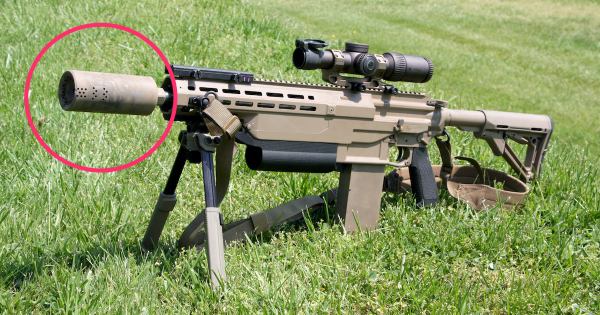 Army researchers are working on combining the control of a muzzle brake with the relative silence of a suppressor to help soldiers maintain quiet, accurate fire on the battlefield, according to multiple media reports.

Partially inspired by the muzzle brake on an 155mm howitzer and initially designed for use on the 7.62mm M240B machine gun, researchers have also tested the new accessory on the Next-Generation Squad Weapon Technology Demonstrator, according to procurement website TechLink.

The name of the device? The “smuzzle,” according to researchers.

“A few years ago, we were asked whether our next-gen squad weapon should have a muzzle brake or a suppressor,” smuzzle co-inventor Greg Oberlin of the Army Combat Capabilities Development Command's Research Lab told TechLink. “We asked ourselves ‘why not both?'”

Oberlin and co-inventors Daniel Cler and Eric Binter have been working on the smuzzle for the Army’s CCDC Armaments Center since 2007, when the team sought to apply the lessons of the 155mm howitzer to the M240 in order to reduce recoil, muzzle flash, and the auditory signature of the machine gun.

According to TechLink, their research culminated in dozens of prototypes and a handful of patents, including one granted as recently as March 2020 for a “suppressed muzzle brake.”

Like most small-caliber muzzle brakes, the smuzzle vents the pressurized gas of each shot to counteract the recoil of the rifle. By venting the gas through a series of tiny holes, the smuzzle purportedly reduces volume by 50 percent and flash signature by 25 percent.

“Inside the can, three sound suppressing baffles lay in front of a brake baffle,” TechLink's Troy Carter explains. “The design allows gas dissipation at a lower pressure over a longer duration. In this context, longer means just a few more milliseconds, but it makes a difference.

Here's a look inside, according to the March 2020 patent:

While Army researchers have so far only tested the smuzzle on the M240B machine gun and NGSW Technology Demonstrator, co-inventor Cler emphasized to TechLink that the design is largely adaptable and several different versions have been designed to fit a weapons systems chambered in a variety calibers.

“It was designed for automatic and semi-automatic weapons, but it’d be useful for anyone shooting magnum cartridges,” Cler told TechLink. “It has what you could call a bottom blocker that also reduces how much dust kicks up.”

Watch the smuzzle in action in this TechLink footage below: