It was found wrecked on Fort Chaffee. 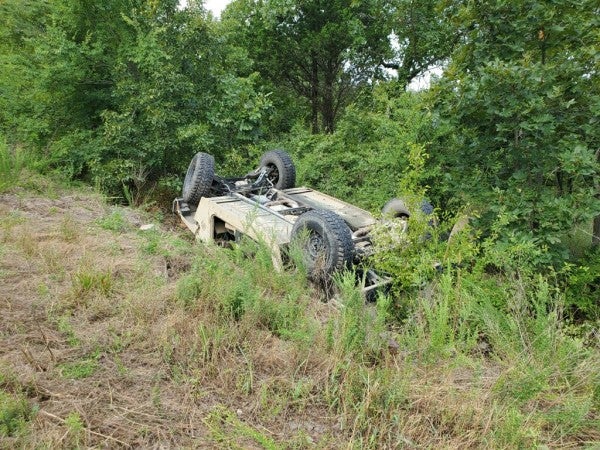 Two men in Arkansas allegedly stole an Army Humvee at gunpoint on Monday before they subsequently flipped the vehicle into a ditch about an hour later.

A civilian mechanic working for the Army Reserve took the Humvee out for a test drive and later stopped to see whether he could assist some people apparently dealing with broken down vehicles on the side of the road, according to an Arkansas National Guard official.

The civilian approached the cars “to see if they needed assistance,” according to Lt. Col. Brian Mason, a Guard spokesman, who added that two men then “pulled a gun” on the Reserve employee when he approached their car, took the Humvee, and “drove off” in the Army Humvee and a Dodge truck.

The Reserve employee wasn't harmed, and a search for the vehicle immediately began.

The “wrecked” Humvee was found upside down around an hour later, Col. Dwight Ikenberry told the local NBC affiliate, off a public highway that goes through Fort Chaffee, an Army National Guard installation. Mason explained that the highway is “frequently used by military vehicles, convoys, etc.”

There weren't any weapons, ammunition, or “sensitive items” in the Humvee at the time it was taken.

The investigation into the armed carjacking is ongoing.