The Humvee slipped out of its parachute, causing it to “burn in,” or hit the ground without a chute. 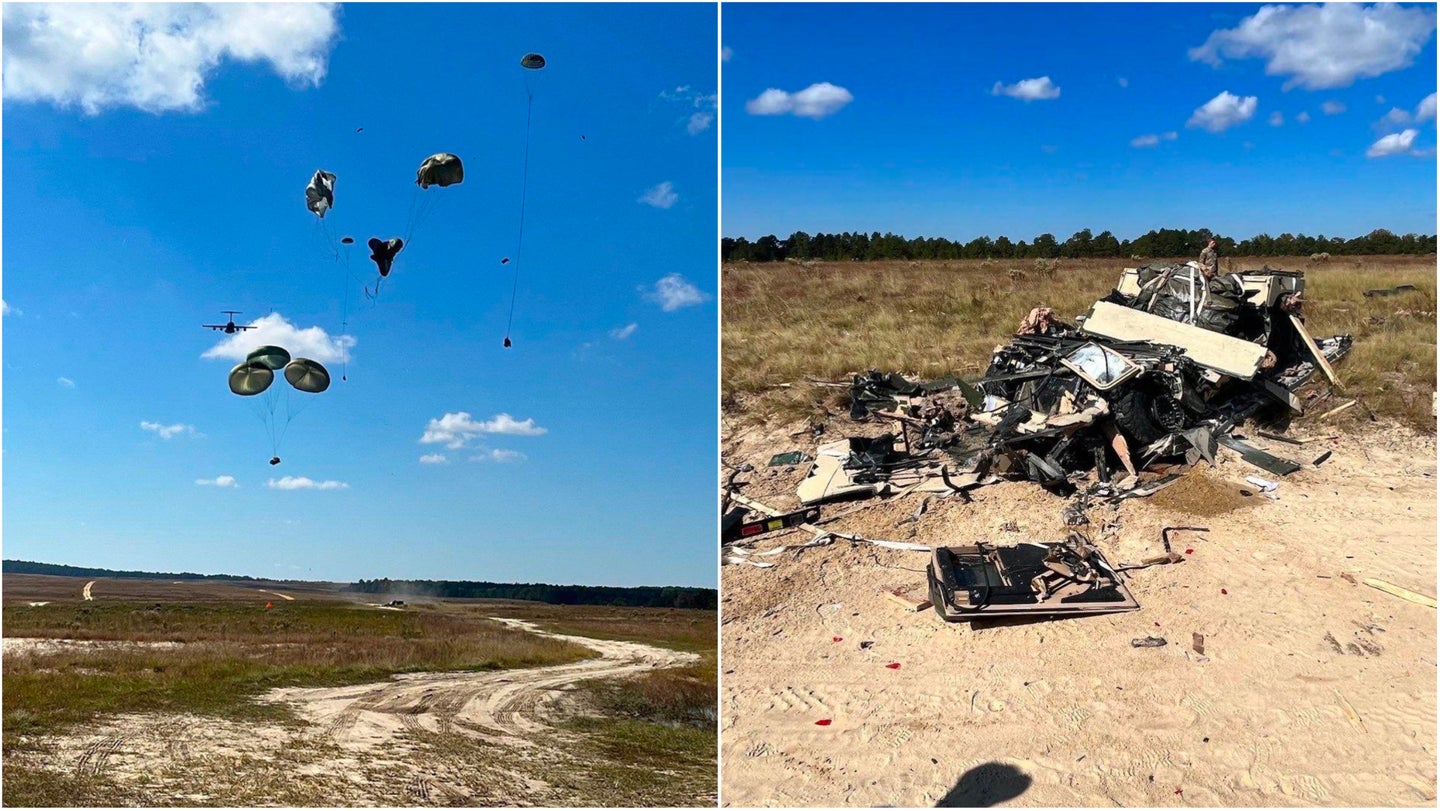 Before and after photos of an Army Humvee damaged during an Oct. 14, 2022 airborne exercise at Fort Bragg, North Carolina. (Photos courtesy of Army WTF! Moments).
SHARE

No matter how many times that troops practice airdrops, there’s always the chance that something could go wrong, and that’s exactly what happened recently when a Humvee slipped out of its parachute after it was dropped from an Air Force C-17 over Fort Bragg, North Carolina.

Thankfully, no paratroopers were hurt in the incident, said Army Lt. Col. Brett Lea, a spokesman for the 82nd Airborne Division.

“On Oct. 14, a military vehicle being airdropped at Sicily Drop Zone during an airborne operation potentially sustained a tear in one of its suspension slings due to the platform rotating upon exit, which resulted in an accelerated drop and severe damage to the vehicle,” Lea told Task & Purpose. “The incident is currently under investigation.”

Like many airdrops gone wrong in recent years, this incident was caught on video. A 48-second TikTok video shows a C-17 flying over the drop zone and then the Humvee emerging from the aircraft. As Lea mentioned, the Humvee spins in the air before coming loose from its parachute and hurtling towards the ground.

“It was a good opening, it just wasn’t rigged right, I don’t think,” an off-camera spectator says in the video, which was shared on Twitter by U.S. Army WTF! Moments.

In paratrooper parlance, the Humvee “burned in” — a term that applies to hitting the ground without a parachute.

No information was publicly available about how much money the damage caused by the airdrop incident will cost the Army, according to the 82nd Airborne Division. Each Army Humvee typically costs more than $200,000 to produce.

In the past several years, pictures and videos of problematic airdrops have become shared more often on social media. It started when three Humvees crashed to the ground during a 2016 training exercise in Germany. A viral video of the incident included an off-camera soldier laughing and cheering as the Humvees’ parachutes failed to open. That soldier was later administratively disciplined.

Another service member, Army Sgt. John Skipper of the 173rd Airborne Brigade, was convicted at a May 2018 court-martial of cutting the three Humvees’ parachute straps before the airdrop.

Paratroopers have little time to respond to emergencies during an airdrop. They are supposed to open their T-11 reserve parachute if their main parachute has not opened within six seconds into their fall, but it can take even more time to deploy that reserve in a life-or-death situation.

A December 2021 TikTok video shows an Army paratrooper who fell for about 13 seconds before his reserve chute finally opened. Another video posted in September shows a military paratrooper falling even further until his reserve parachute opened just a second before impact.

Even less chilling problems during airdrops have the potential to seriously injure paratroopers. A video posted in August shows a soldier who missed the drop zone and hit nearby bleachers. Spectators on the ground yelled out “Oh!” in unison as the soldier landed with a loud crash.

Airborne operations are inherently dangerous, so paratroopers will continue to risk life and limb with each jump. That also means that the risk of equipment sustaining damage during airdrops is always present.

The Humvee damaged during the Oct. 14 incident at Fort Bragg is likely damaged beyond repair. U.S. Army WTF! Moments also posted pictures of the aftermath, which appear to show the Humvee completely destroyed by the fall.

Adding insult to injury, the vehicle’s maintenance sheet, which was recovered from the wreckage, has “no new faults” clearly written on it.