That was too close. 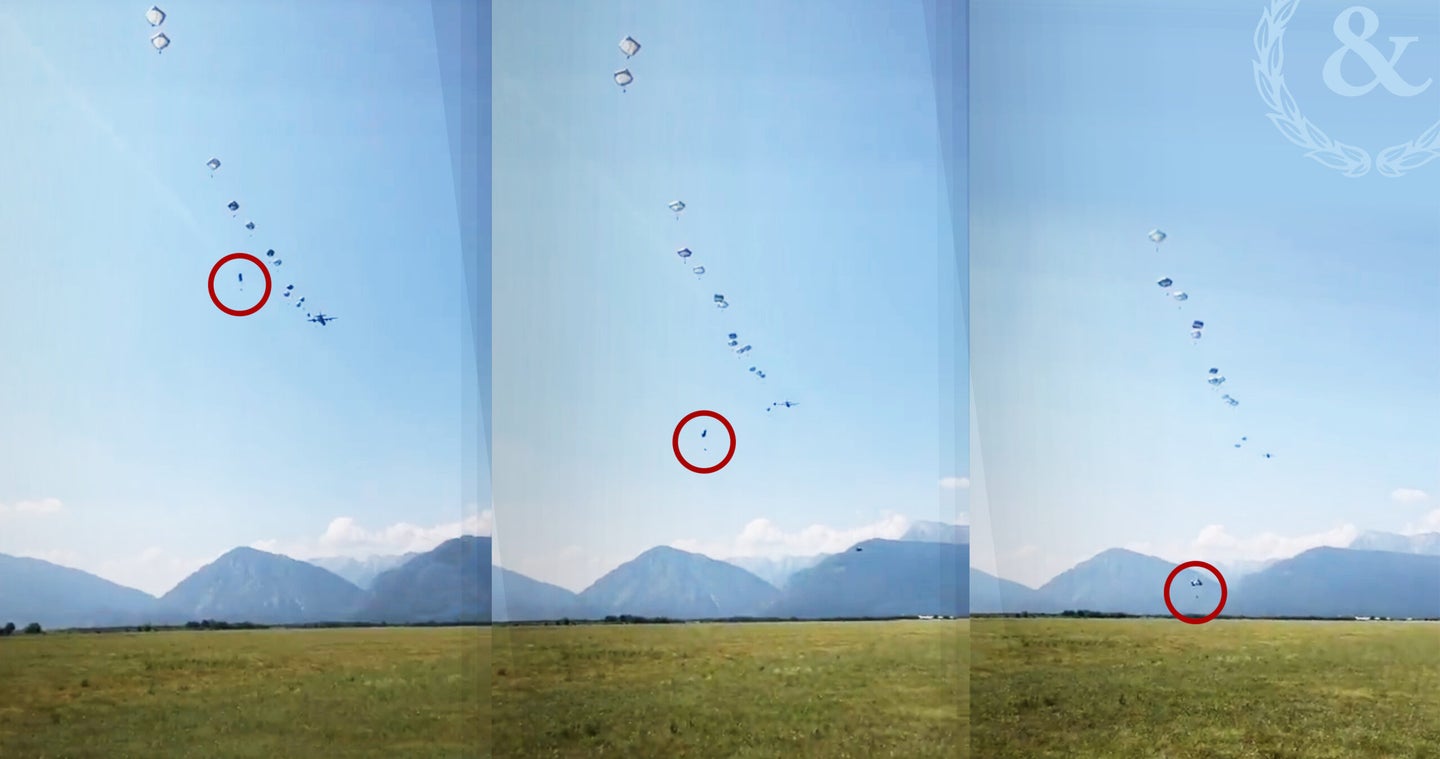 Screen shots from a viral video show how close this military jumper came to a disaster. (Aaron Provost/Task & Purpose).
SHARE

A frightening new video shared on social media underscores that being a paratrooper is inherently dangerous and jumpers are always seconds away from disaster.

The 22-second TikTok video posted by U.S. Army WTF! Moments shows paratroopers exiting what looks like an Air Force C-130 transport plane when one soldier’s main parachute fails to open. The paratrooper twists in circles as he hurtles toward the ground for 15 nauseating seconds before the soldier’s reserve parachute finally opens one second before impact.

The video does not identify what military branch the service members parachuting out of the plane serve with. Army spokesman Jason Waggoner could not provide any information about the incident shown in the video, including when and where the jump took place and whether the service member had been injured.

It appears that the video was taken at the Juliet Drop Zone in Italy used by the 173rd Airborne Brigade, but the unit has not reported any incidents recently in which a paratrooper has had to open a reserve parachute, and no paratroopers have been significantly injured in recent airborne operations at that drop zone, said Lt. Col. Michael Weisman, a spokesman for U.S. Army Southern European Task Force, Africa.

It’s not clear which service took part in the exercise shown in the video, but the jumpers are using T-11 parachutes, which the Army uses for its airborne forces, a paratrooper told Task & Purpose.

Jumpers are trained to open their T-11 reserve parachute after six seconds if their main parachute has not opened by then, although jumpers sometimes need an extra second or two to realize that their main chute has not deployed, said the paratrooper, who spoke on condition of anonymity because he was not authorized to talk to reporters.

The jumper in the video may have been caught in a partial “cigarette roll,” meaning his main parachute may have become entangled with other lines, and that’s why it did not open fully, the paratrooper said.

It also appears that the jumper tried to open his T-11 reserve parachute earlier in his fall, but the canopy did not catch enough air to inflate until the last moment, the paratrooper said.

From the video, it appears that the plane from which the paratrooper jumped was at a higher altitude than the aircraft used for the Army’s Basic Airborne Course fly, giving the jumper a few extra seconds to open the reserve chute, said retired Army Command Sgt. Maj. Jeffrey Mellinger, who once served as a Special Forces military freefall instructor at Fort Bragg, North Carolina.

“That reserve parachute takes about 400 feet to open, and so that’s a pretty substantial amount of time when you are coming to the ground as quick as that person was,” Mellinger told Task & Purpose. “There’s a reason they call this hazardous duty.”

While it is not known what types of difficulties the jumper in the video encountered, paratroopers can encounter several problems while leaving the aircraft that can prevent their parachutes from opening, Mellinger said.

For example, if paratroopers bump into the plane or helicopter after they jump, they can be thrown into a spin, he said. Jumpers could also get their static lines, which open their parachutes, entangled with themselves or other pieces of equipment.

Problematic jumps such as the one shown in the most recent video are not common because the Army takes several precautions to make sure paratroopers’ parachutes open at the appropriate time, Mellinger said. Except for some military freefall operations and training, paratroopers’ chutes are packed by experienced riggers, who know that they have a jumper’s life in their hands, he said.

Paratroopers also spend two weeks at the beginning of their training being drilled repeatedly about how to position their bodies when they leave the aircraft, what steps to take in emergencies, and how to land properly, he said. Once paratroopers begin training in aircraft, they come under the watchful eyes of jumpmasters, who can fix any problems that arise before the jumpers get to the door.

“To help put that in perspective, think about the airborne school, how many thousands of people go through the Basic Airborne Course every year,” Mellinger said. “It’s incredible to think about the numbers. So, when you look at an individual malfunction, it’s not rare but it’s unusual – it’s really unusual.”

Still, mishaps can occur. A separate TikTok video posted in December showed another jump gone wrong when a paratrooper fell for about 13 seconds after his main chute failed to open. Other soldiers can be heard yelling for the jumper to open the reserve chute. The T-11 canopy finally opened just a couple of seconds before the jumper landed.

In May 2018, Army Sgt. John Skipper of the 173rd Airborne Brigade was convicted at court-martial of cutting parachute straps for three Humvees, so that the vehicles crashed to the ground during a 2016 training exercise in Germany.  That incident was also captured in a video that went viral, and one soldier who can be heard laughing in the video as the Humvees plummet to earth was disciplined administratively.

More recently, a German paratrooper taking part in an international competition for paratroopers in Rhode Island landed on the second story balcony of a home in the drop zone.

Paratroopers are highly trained service members, but there is a limit to the steps they can take to correct a jump that has gone wrong, Mellinger said.

“At the end of the day, an old Golden Knight said something years ago that I never forgot during my free fall days, and that was: ‘When you’ve got all your handles in your hand, you can’t do any more,’” Mellinger recalled.