PETA is trying to save deadly snakes from bloodthirsty Marines

"It tastes like blood with a hint of fish." 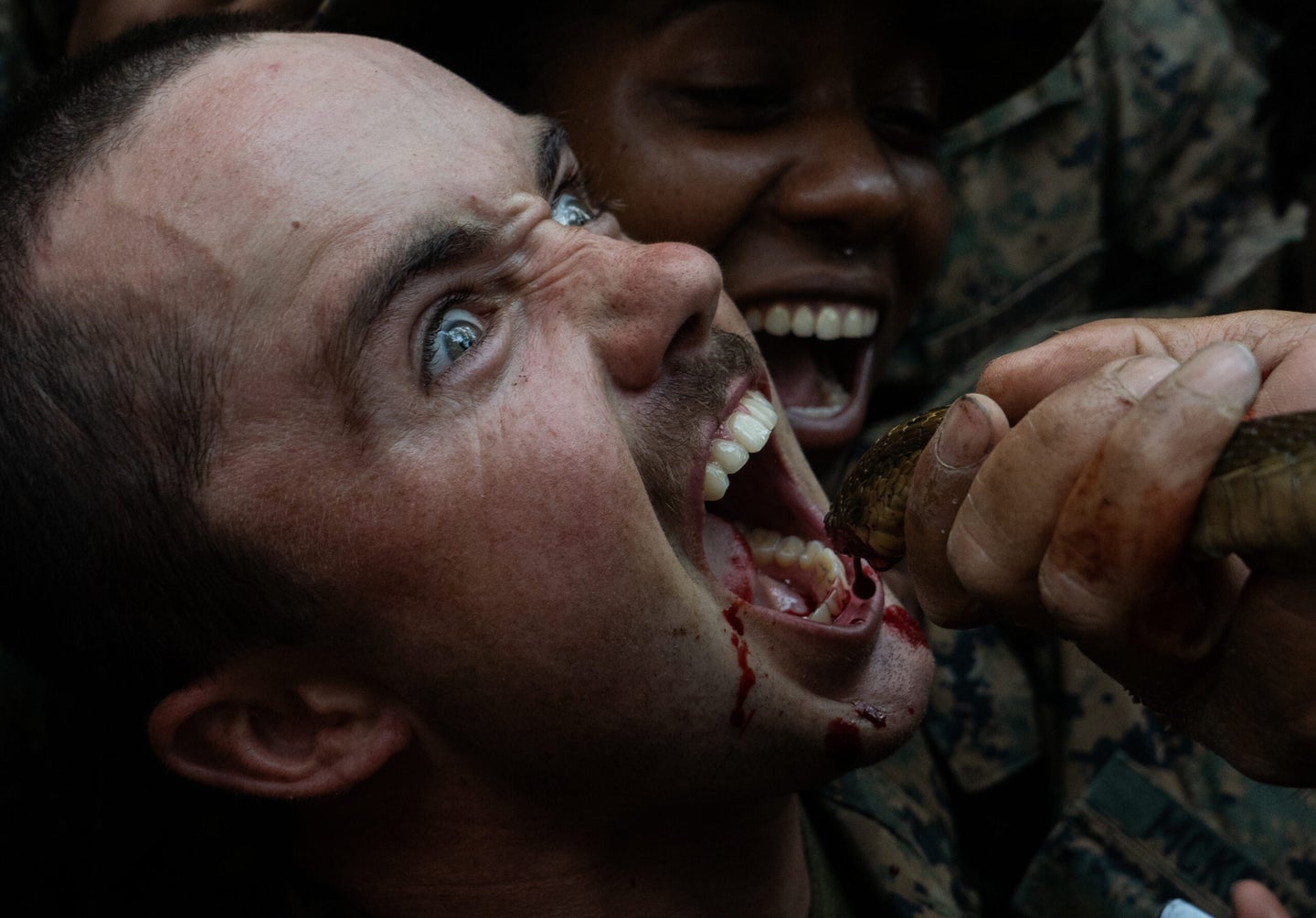 U.S. Marines Lance Cpl. Lance with 1st Battalion, 5th Marine Regiment, drinks the blood of a king cobra as part of jungle survival training during exercise Cobra Gold 2020 at Ban Chan Khrem, Chanthaburi, Kingdom of Thailand, Mar. 1, 2020.The Marines learned essential skills necessary for surviving in a jungle environment, such as making a fire, eating plants and alternative ways to stay hydrated. Drinking the blood of a cobra provides the body with extra nutritional to help it stay alive, but is meant as a last resort option. Exercise Cobra Gold 20 is the largest Theater Security Cooperation exercise in the Indo-Pacific region and is an integral part of the U.S. Commitment to strengthen engagement in the region. (U.S. Army Photo by Sgt. Nicolas Cholula).
SHARE

The People for the Ethical Treatment of Animals group is once again trying to save deadly snakes from bloodthirsty Marines training in Thailand.

In a letter sent to Defense Secretary Lloyd Austin on Wednesday, the animal rights group said it was submitting a petition to “eliminate the cruel and unnecessary killing of animals” at Cobra Gold, a massive annual training exercise meant to strengthen ties between the U.S. and Thai militaries. Notably, PETA attorney Caitlin Zittkowski submitted the petition under the Administrative Procedure Act, which quite literally does not apply: “This section applies … except to the extent that there is involved — a military or foreign affairs function of the United States,” reads the first line of the statute.

Nevertheless, the petition takes issue with the jungle survival portion of the training, which features lessons on how to gather water in the bush, which bugs are right for your palate, and rather infamously, how to cut off the head of a King Cobra and use its blood as an alternative water and nutrient source. Thai special forces instructors also kill chickens, geckos, tarantulas, and scorpions during the training.

“A Girl Scout could figure out how to survive in a jungle without killing animals for practice, and so, too, should our military’s best and brightest,” said PETA Vice President Shalin Gala, who urged the Pentagon to end the “bloodlust killing” of animals that endangers species, risks public health, and “sullies the honor of the Marines.”

That’s not to mention the photos and videos, which tend to go viral online for perhaps obvious reasons: It’s not every day you see humans drinking snake blood and smiling with lizards between their teeth. As a video shot during the exercise in March 2020 showed, Marines clearly get quite a kick out of trying what’s on the jungle menu from their chefs in Thai special forces, who usually offer tastes of safe-to-eat plants before moving on to live animals.

But it’s not all fun and games. Marines say they value the training as a learning opportunity and a way of bonding with their Thai counterparts, who have been playing host to the exercise for nearly 40 years. And as much as ‘Marines drinking snake blood’ garners headlines while simultaneously driving animal rights activists up a wall, the practice can in fact keep someone alive, albeit as a last resort. (“It tastes like blood with a hint of fish,” according to one Marine.)

“I’ve never done anything like this before, and I didn’t know you could eat most of those plants,” said Sgt. William Singleton of the 2018 iteration of Cobra Gold. “Seeing the different animals that you can eat is pretty mind-blowing. It will help us recognize [edible food sources] easier in the wilderness.”

Still, PETA cited a photo-heavy Daily Mail report in a similar plea to the Marine commandant last year, which demanded the Marine Corps end what the group said was less a military drill and more a “frat party gone wrong.“ That didn’t work, of course.

Now PETA is back, and this time they’re armed with a stern letter and a federal rulemaking regulation, which it claims can indeed be applied to the Department of Defense. “Several federal courts have also found that actions by DOD and various branches of the military are judicially reviewable under the [Administrative Procedure Act,” it says in the petition, which cites a 2019 Pentagon directive calling for “alternative methods to animal use” in training “whenever possible.”

It’s worth noting that similar battles have been fought and won by PETA in the past, though whether this latest effort succeeds is an open question. The Pentagon declined to comment by deadline for this article, but after publication, a spokesman passed the buck to the Thai military:

“The Royal Thai Armed Forces run the jungle survival training during Exercise Cobra Gold,” said Army Lt. Col. Marty Meiners, adding that they would need to be contacted for more specifics. “The Department of Defense will continue to ensure we are employing best practices for the humane treatment of animals while accomplishing the need to prepare and train our service members for survival in any and all situations.

So will Marines someday take computer-based-training on drinking snake blood? Perhaps. But I guarantee they’re not going to be happy about it.