Is the Pentagon gearing up to send a contingent of U.S. service member to South American in response to the ongoing political crisis in Venezuela? Apparently, according to the world's dumbest OPSEC fail 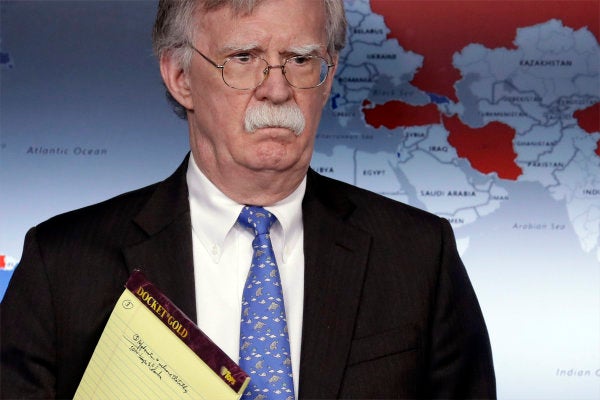 Is the Pentagon gearing up to send a contingent of U.S. service member to South American in response to the ongoing political crisis in Venezuela? Apparently, according to the world's dumbest OPSEC fail.

Appearing at a press briefing at the White House on Monday, National Security Adviser John Bolton managed to get his handwritten notes, including a line about “5,000 troops to Colombia,” captured by every photojournalist present in an embarrassing lapse of operational security — namely by holding his yellow legal pad, notes out.

National security adviser John Bolton holds his notes during a press briefing at the White House, Monday, Jan. 28, 2019, in Washington.

At the moment, it's unclear what, if anything, that “5,000 troops to Colombia” actually means. The slip came just days after military aviation observers noticed a U.S. Air Force Special Operations C-146A Wolfhound inbound to the capital of Bogota, and the commanding general of U.S. Army South arrived in Colombia on Monday to discuss military ties with the United States.

When questioned by reporters on Tuesday regarding Bolton's notes, acting Secretary of Defense Patrick Shanahan demurred. “I haven't discussed that with Secretary Bolton,” he said of a potential U.S. military deployment to Colombia. “I'm not commenting on it.”

A White House spokesman was more cryptic when reached by Task & Purpose: “All options are on the table.”

While both U.S. and Colombian officials threw cold water on the idea of an imminent influx of U.S. service members into the southern hemisphere, the cryptic responses from the Pentagon and White House suggests that maybe, just maybe, those notes were a warning to any Latin American countries planning on starting some shit during Venezuela's current crisis? Is it possible that, rather than a dumb OPSEC slip, Bolton's overtly visible notes are part of some Machiavellian effort to outflank America's foes on the geopolitical stage?

The short answer is, well, no. The longer answer: Fuck no.

This is somehow the third easily-avoidable OPSEC fail to hit senior level Trump officials since the start of the administration. In May 2017, the Washington Post inadvertently published then-Secretary of Defense James Mattis' phone number after Trump's bodyguard, Keith Schiller, was photographed with Mattis' digits on a sticky note in plain sight; the following August, a selfie taken in the West Wing included a full capture of then-Trump adviser Steve Bannon's whiteboard of power.

Let this be a reminder: When it comes to issues of OPSEC, Trump officials are clearly not playing four-dimensional chess. Hell, they're barely even playing checkers; if anything, they're eating the pieces.