President Donald Trump may have loved to call former Secretary of Defense James Mattis by his much-loathed "Mad Dog" nickname, but his own transition team had concerns regarding the former Marine general's infamous battlefield missives and his lackluster handling of alleged war crimes committed by U.S. service members 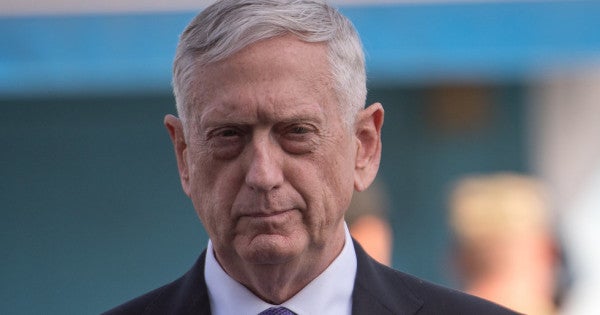 President Donald Trump may have loved to call former Secretary of Defense James Mattis by his much-loathed “Mad Dog” nickname, but his own transition team had concerns regarding the former Marine general’s infamous battlefield missives and his lackluster handling of alleged war crimes committed by U.S. service members, according to leaked vetting documents.

According to Axios, Trump “reviewed many of these documents at Trump Tower and Bedminster before his interviews, according to a source who saw him eyeball them.”

While Petraeus’ vetting documents centered on his relative opposition to torture, among other issues, the primary red flags for Mattis include his history of “controversial statements” stretching all the way back Mattis’ time as a Marine Corps three-star who led U.S. forces in Iraq and Afghanistan and his 2013 “attack” on the U.S. for “for a perceived pro-Israel bias.”

But among the most interesting concerns of Trump transition officials is the fact that Mattis “was relatively lenient in dealing with soldiers accused of war crimes,” which includes a redacted section:

The 2007 dismissal of charges is in reference to Mattis, then the commander of the I Marine Expeditionary Force, for its role as convening authority in the case of the 2005 Haditha massacre, in which several Marines allegedly massacred 24 Iraqi civilians.

As Task & Purpose previously reported, the Haditha massacre was the biggest war crimes case since the My Lai massacre during the Vietnam War, but Mattis dismissed charges against two Marines and granted immunity to a total of four, effectively shielding them from court-martial proceedings and detailing his logic in a letter to one of the accused. Here’s how T&P’s Adam Linehan described the letter in his May 2018 investigation into the Haditha saga:

Over four paragraphs of florid prose, the author’s tone veered from pensive — “the experience of combat is difficult to understand intellectually and very difficult to appreciate emotionally” — to cryptic — “our way is right, but it is also difficult.” It noted affectionately that “the challenges of this combat environment put extreme pressures on you.” And it even invoked Oliver Wendell Holmes Jr., “one of our Nation’s most articulate Supreme Court Justices,” affirming that “detached reflection cannot be demanded in the face of an uplifted knife.”

The letter, which was soon leaked, seemed to have been written with a broader audience in mind. “You have served as a Marine infantryman in Iraq where our Nation is fighting a shadowy enemy who hides among the innocent people, does not comply with any aspect of the law of war, and routinely targets and intentionally draws fire toward civilians,” it stated. And it concluded, “With this dismissal of charges, you remain in the eyes of the law — and in my eyes — innocent.”

It was almost as if the author had been speaking on behalf of the Marine Corps as a whole, defending its honor at a moment of profound crisis and making the case for the moral rightness of its mission in the grim shadow not only of Haditha’s horrors but of Fallujah’s as well. And it was signed J.N. Mattis.

This philosophy of “moral righteousness” may have been seen as a weakness to Trump transition staffers, but Trump himself clearly doesn’t see it that way. In fact, Trump has recentlly shown an unusual willingness to use his executive power to pardon U.S. service members and veterans both accused and convicted of war crimes.

In May alone, Trump pardoned Army Lt. Michael Behenna, who was imprisoned for five years for killing an Iraqi prisoner in 2008, and was actively considering the possibility of issuing pardons for Navy SEAL Chief Edward Gallagher and Army Special Forces Maj. Matthew Golsteyn, both of whom he had previouslyexpressed sympathy for on Twitter.

According to a poll from the 2018 Clarion Project, 77 percent of Americans believed U.S. service members shouldn’t be prosecuted for overseas war crimes simply because “war is a stressful situation and allowances should be made.”