"Our Constitution and our Republic will overcome this stain." 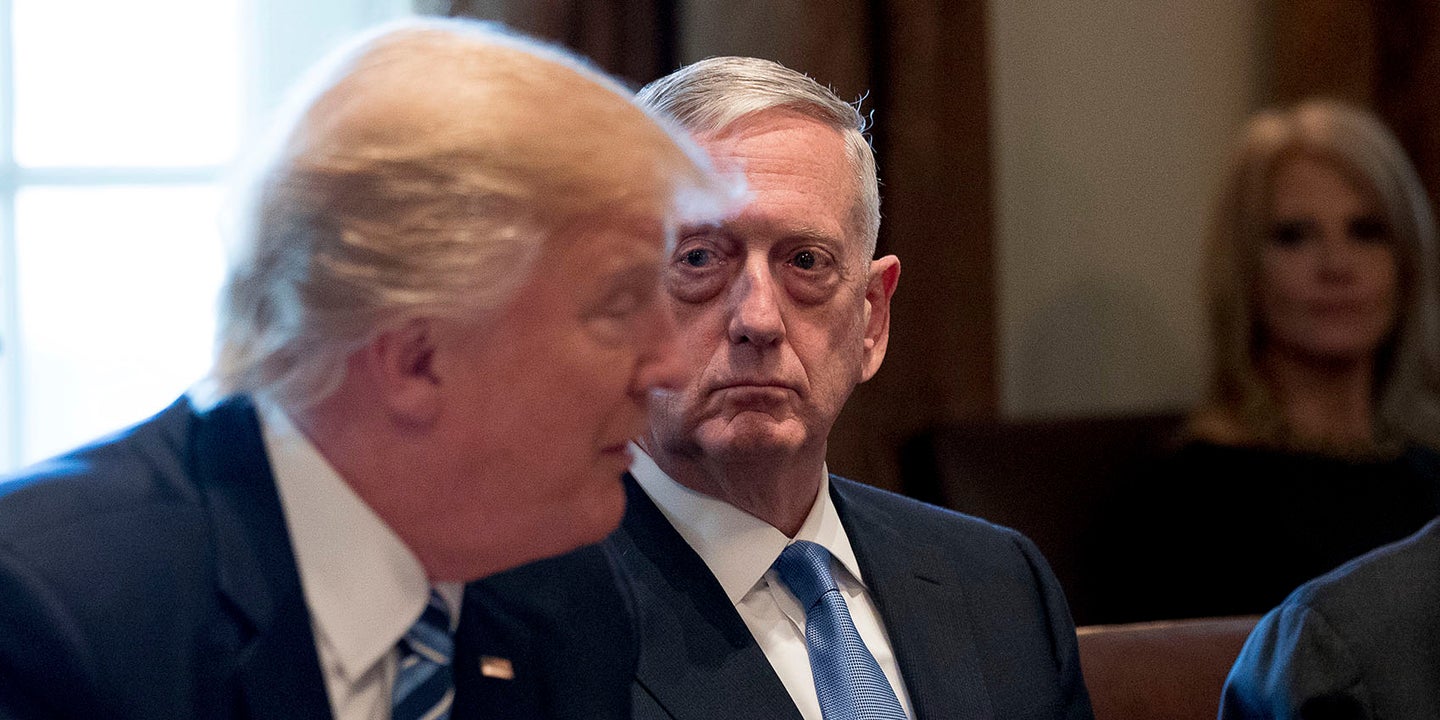 President Donald Trump will leave office as “a man without a country,” his first defense secretary Jim Mattis said in a scathing critique with undertones of the American Civil War.

“Today’s violent assault on our Capitol, an effort to subjugate American democracy by mob rule, was fomented by Mr. Trump,” Mattis wrote in reference to unprecedented turmoil in Washington on Wednesday after rioters stormed the halls of Congress.

Mattis, a retired Marine general who served as Pentagon chief until January 2019, added that Trump’s “use of the Presidency to destroy trust in our election and to poison our respect for fellow citizens has been enabled by pseudo political leaders whose names will live in infamy as profiles in cowardice.”

Other former Trump administration officials weighed in as well, including Retired Marine Gen. Joseph Dunford, the chairman of the Joint Chiefs of Staff until 2019 who vowed to stay silent on Trump:

“This is an outrageous assault on our democracy and a sad day for our nation,” Dunford said. “As many have said we’re better than this. I believe our leaders who have continued to undermine a peaceful transition in accordance with our Constitution have set the conditions for today’s violence.”

“As this transition plays out over the next two weeks, I am confident the U.S. military will stay out of politics, and remain true to its sworn oath to support and defend the Constitution, and the American people, as the most trusted and respected institution in the country.”

The rare public rebukes come after Trump whipped up tens of thousands of his supporters near the White House on Wednesday during an hour-long speech to protest the certification of an election in which the president decisively lost, inspiring condemnation from political leaders of both parties and the resignation of four Trump administration officials.

As Trump spoke, he offered praise for the “American patriots” in the crowd and his supporters in Congress while railing against the media, Democratic and Republican political enemies, and an unnamed force’s attempt to, he said, “indoctrinate your children.” He repeatedly urged Vice President Mike Pence to overturn a “stolen” election, which Pence does not have the power to do. “It’s a pure theft in American history, everybody knows it,” Trump said.

The mob that descended on Capitol Hill was encouraged by the president, who told his supporters at the so-called “Save America Rally” that he would walk with them to the Capitol in order to, he said, “confront this egregious assault on our democracy” and “take back our country.”

In one portion of the president’s speech, Trump shared a dizzying array of inaccurate figures in reference to false claims of illegal, lost, or stolen ballots: 170,000 absentee votes in Wisconsin; 88,000 ballots in Georgia; 130,000 ballots in Nevada, and so on. The president made these claims, saying they were proof of voter fraud, despite every state certifying election results and the Trump campaign losing dozens of lawsuits in front of judges appointed by both Democrats and Republicans.

“We fight like hell and if you don’t fight like hell, you’re not going to have a country anymore,” Trump said near the end of his speech, closing with a call for supporters to join him in walking down Pennsylvania Avenue. The president then left the crowd carrying Trump 2020 flags and wearing “Make America Great Again” hats behind for an armored car ride back to the White House.

The march quickly devolved into chaos on Capitol Hill as the president’s supporters pushed through police barricades and stormed into the House and Senate. Vice President Pence was rushed away by the Secret Service and lawmakers were told to shelter in place. At least four people died by day’s end, according to The Washington Post.

“I thought we’d have to fight our way out,” Rep. Jason Crow (D-Colo), a former Army Ranger who served in Iraq, told The New York Times.

After the Capitol was cleared of rioters, Congress affirmed President-elect Joe Biden’s election victory early Thursday morning, marking the final step in the transition of power before Trump departs the White House on Jan. 20 after four turbulent years in office.

“Our Constitution and our Republic will overcome this stain and We the People will come together again in our never-ending effort to form a more perfect Union, while Mr. Trump will deservedly be left a man without a country,” said Mattis, referencing The Man Without a Country, a short story published in The Atlantic in the winter of 1863 that describes the saga of a man who only comes to love his country in exile.

In the story, the narrator learns of the death of Philip Nolan, an Army lieutenant who is court-martialed for treason and angrily denounces the United States at trial. “Damn the United States! I wish I may never hear of the United States again!” he says. The judge grants his wish, and for the rest of his life, Nolan is relegated to life on Navy vessels at sea, never allowed to see or hear any news of his home.

“The gentlemen on board will make any arrangements agreeable to themselves regarding his society. He is to be exposed to no indignity of any kind, nor is he ever unnecessarily to be reminded that he is a prisoner,” the judge in the story orders.

“But under no circumstances is he ever to hear of his country or to see any information regarding it; and you will specially caution all the officers under your command to take care, that, in the various indulgences which may be granted, this rule, in which his punishment is involved, shall not be broken.”

It seems extraordinary that Trump’s first and longest-serving Pentagon chief could wish his former boss to be exiled, but these are extraordinary times. Though more than likely the so-called “warrior monk” was speaking figuratively: That Trump’s incitement of violence was tantamount to a betrayal, and the cost of betraying one’s country is that you are no longer part of it.

Perhaps Trump will face political banishment, as Mattis desires: On Thursday, administration officials were considering invoking the 25th Amendment in order to remove Trump from office before he could do more harm or sow further chaos, while others floated the possibility of a second impeachment. Trump, meanwhile, released a statement on Thursday finally acknowledging Biden’s win and saying there “will be an orderly transition on January 20th.”

But whatever happens, it’d be wise to remember the sage advice Mattis offered to troops in 2017 amid partisan bickering and political unrest. Hold the line.

“You just hold the line until our country gets back to understanding and respecting each other, being friendly to one another; what Americans owe to one another.”

Related: Mattis’ 2017 Message To Troops Is Worth Remembering: ‘Just Hold The Line’