White House officials have been calling their friends at The Washington Post to let them know Director of National Intelligence... 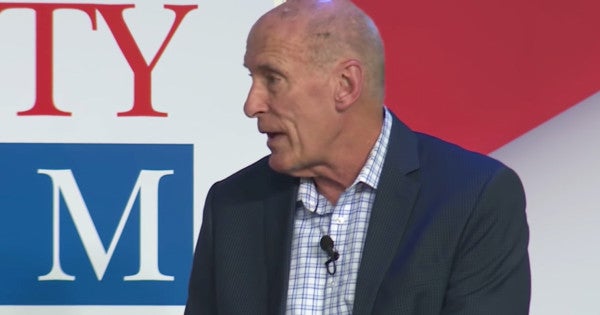 White House officials have been calling their friends at The Washington Post to let them know Director of National Intelligence Dan Coats “has gone rogue” over comments he made at the Aspen Security Forum on Thursday.

The leaks from Trump advisers come due to the “damaging optics” of what Coats' said in an hour-long conversation with NBC's Andrea Mitchell. Other aides said they worried the president would take what he said as a “personal betrayal.”

Good Lord. What did this guy say? That Trump is a total moron? He's a kook that's unfit for office?

No, he didn't say anything like that. Coats just dared to tell the truth about Russia's interference in the 2016 presidential election.

Coats explained why he put out a statement attesting to the intelligence community's assessment of Russia's involvement (after Trump threw them under the bus while standing next to Russian President Vladimir Putin), and then looked surprised when he was told that Putin was coming to Washington in the fall — which he apparently hadn't been told about.

“I was just doing my job,” Coats explained of his decision to release a statement that the intelligence community has “been clear in assessments” of Russia's past and ongoing efforts to undermine U.S. democracy. He added that when he joined the administration, he met the president and told him that, as non-sycophants are wont to do, there would be times that he would bring news he didn't want to hear.

He added: “My thoughts there were that I needed to correct the record. This is the job I signed up for … obviously, I wished he made a different statement, which I think now, he has clarified.”

Other perceived slights from Coats included the news that he still hadn't been told what was said between Trump and Putin in their one-on-one meeting in Helsinki. Just to refresh your memory: On Tuesday, the President of the United States hung out for about two hours with the President of Russia, and made “verbal agreements” on a number of issues of which neither Coats or the Pentagon seems to have been given any guidance on.

But worst of all for Coats was his reaction to the news that Putin was coming to Washington while he was on stage: “Say that again. Did I hear you? Okayyy. That's going to be special.”

Sure, he may have gone rogue. Or he may have just reacted as one does when they are kept in the dark on matters they need to know about.