Here’s How To Do Trump’s Parade

President Trump wants a parade. I say, let him have it. But let’s do it American style. He’s suggesting an... 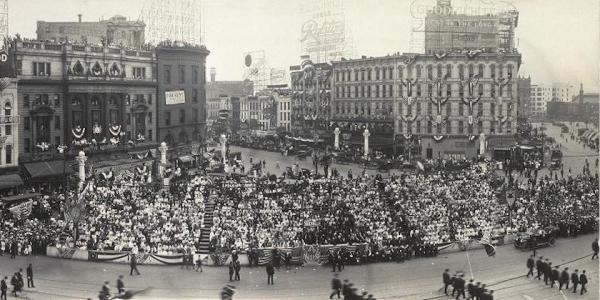 President Trump wants a parade. I say, let him have it. But let’s do it American style. He’s suggesting an Independence Day event. Terrific idea, but, to avoid the punishing afternoon heat, let’s do the march down Pennsylvania Avenue at about nine in the morning. At the end of the march have the tanks, infantry carriers, and artillery pieces do a right flank march onto the National Mall and join their active-duty and veteran comrades in a “Grand Encampment.”

The precedent for a Grand Encampment in Washington dates back to post-Civil War America when veterans of the “Grand Army of the Republic” celebrated their service by conducting a review down Pennsylvania Avenue. These yearly reviews and encampments lasted well into the 20th century.

Why do this now? It’s simple. Even though the military is our most respected institution very few Americans really know us. In my Vietnam generation virtually every household had a relative or neighbor who served. Today less than one half of one percent of our citizens serve in on active-duty today. No surprise then that very few Americans have even spoken to a soldier.

A Grand Encampment would reintroduce America to its military. It would turn a muscled display of military might into a celebration of our best. Think of the Mall festooned with displays depicting the military’s involvement in global and domestic disaster relief. Military medical personnel would be able to showcase their successful treatment of wounded veterans and highlight our military’s intervention in regions threatened by drought and pandemics.

Our citizens would be allowed to climb on cool military stuff while hanging out and talking shop with young tank and helicopter crewmen. I would invite reenactors from all our wars to camp out on the Mall in period uniforms and teach students a bit about their wartime heritage. Visitors would be invited to play inside state-of-the-art virtual simulators and perhaps experience the thrill of jumping out of an airborne “mock parachute tower” or perhaps fly down a Ranger School “slide for life.”

A flyover would likely culminate Trump’s morning parade. After the flyover, let’s invite aircraft from all the services to land at nearby Joint Base Andrews and join a huge celebration of American airpower past and present. The air services would entertain by conducting mock air battles with legacy and modern combat aircraft. Perhaps the Army could join in with a tactical parachute jump over the airbase.

Protesters would show up in droves of course. After all this is Washington. But instead of sending in the Capitol Police, let’s invite all peaceful protest groups to join in and engage with soldiers and veterans inside the encampment. What could be more American?

Lest our citizens forget I’d recommend the day end with three candlelight military “tattoos,” one each at the World War II, Korean and Vietnam memorials. Imagine a solemn gathering of soldiers, veterans, and Joe America (with his family) standing together in the twilight to honor those who died to protect America.

MG (Ret) Bob Scales is a former commandant of the Army War College. He spent 18 of his 35 years of service in military education. He earned his Ph.D. in history from Duke University and was president of Walden University after retirement.