Marines Warn Against Too Much Fun At Trump’s Inauguration

Thousands of people from across the country are flooding into the nation’s capital on the eve of the inauguration of... 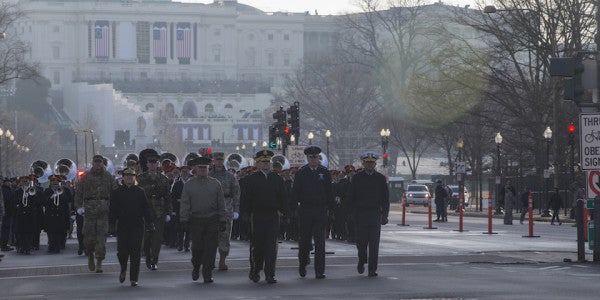 Thousands of people from across the country are flooding into the nation’s capital on the eve of the inauguration of President-elect Donald Trump, and scores of service members are among them. Some have come to celebrate; others to protest. Whichever side of the spectrum they fall on, the Marine Corps wants to ensure that Marines and sailors who plan to be in D.C. this weekend know what they can and cannot get away with.

On Jan. 18, the Corps released a set of guidelines for Marines and sailors participating in “inaugural activities,” a term that could describe anything from Trump’s swearing-in ceremony to, say, an all-nude drum circle on the National Mall (you know, for peace or whatever). Given the magnitude of the event — which even a day prior to its official start has already begun clogging the city’s transit systems and sent throngs of locals running for the hills — anything is possible.

According to MARADMIN 035/17, service members are only “authorized to wear their uniform to and to accept free attendance to” official government events, like the Arlington wreath-laying ceremony, the welcome celebration, and inaugural parade. Marines and sailors can also appear in uniform to the three official balls: both presidential inaugural gala balls at the Walter E. Washington Convention Center and the Commander in Chief’s Ball.

An unofficial event, on the other hand, is basically anything that doesn’t have a government stamp of approval. A bunch of people standing around a disheveled man yelling nonsense through a megaphone is one example. So is a well-organized and peaceful demonstration in support of or against the president-elect. According to the MARADMIN, a Marine or sailor would be allowed to attend either event, or any event for that matter, just as long as they’re out of uniform.

That said, while active-duty Marines and sailors are technically free to express whatever political opinions they have and take part in whatever inaugural activities they please, the MARADMIN mandates that they can only do so in the capacity of a “spectator” while ensuring that “no inference or appearance of official sponsorship, approval, or endorsement can reasonably be drawn.” And that’s where it gets a little tricky.

Related: Stop using the uniform to make a political point >>

Obviously, screaming, “This is for the Corps!” while setting fire to an effigy of Michael Moore would not be allowed. But neither would, as the MARADMIN states, speaking before a political gathering or participating “in any radio, television, or other program or group discussion as an advocate for or against a partisan political party, candidate, or cause.” Being a spectator, as opposed to a participant, also means that active-duty personnel are prohibited from marching or riding in a partisan political parade.

Prohibiting service members from meddling in politics is nothing new, and the justification is simple. The uniform doesn’t represent you, the individual. It represents the United States military, a nonpartisan organization that exists for one reason only: to defend our country from enemies foreign and domestic. The military didn’t vote for or against Trump. You did. Are service members on both sides of the political spectrum going to forget that this weekend? Absolutely.