In the aftermath of the Marjory Stoneman Douglas High School massacre in Parkland, Florida, President Donald Trump offered a simple... 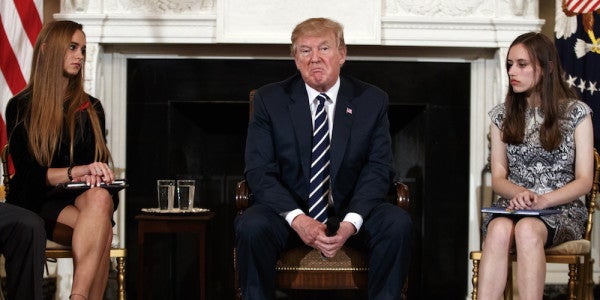 Responding to criticism of a Wednesday listening session in which the president proposed concealed carry among school faculty and staff “adept with the firearm,” Trump tweeted on Thursday that teachers “must be offense” because “defense alone won’t work.”

I never said “give teachers guns” like was stated on Fake News @CNN & @NBC. What I said was to look at the possibility of giving “concealed guns to gun adept teachers with military or special training experience – only the best. 20% of teachers, a lot, would now be able to

….immediately fire back if a savage sicko came to a school with bad intentions. Highly trained teachers would also serve as a deterrent to the cowards that do this. Far more assets at much less cost than guards. A “gun free” school is a magnet for bad people. ATTACKS WOULD END!

….History shows that a school shooting lasts, on average, 3 minutes. It takes police & first responders approximately 5 to 8 minutes to get to site of crime. Highly trained, gun adept, teachers/coaches would solve the problem instantly, before police arrive. GREAT DETERRENT!

….If a potential “sicko shooter” knows that a school has a large number of very weapons talented teachers (and others) who will be instantly shooting, the sicko will NEVER attack that school. Cowards won’t go there…problem solved. Must be offensive, defense alone won’t work!

By all means, let's recreate the shootout at the OK Corral in our schools, nothing could go wrong with that other than maybe the good guys shooting some kids too. It wouldn't be on purpose though, so they don't count. #VetsForGunReform https://t.co/7EHj8vw3Xe

We have created a generation of military service members who suffer from the impact of their service, and now we are doing the same to our children due to the threat of violence in schools. #VetsForGunReform

I went to war because I believed war would keep America safe.

But, I will not stand by while we are told we must bring war to our schools.

I am a vet, I work in a school. Guns do not belong in classrooms. Period. We don’t pay teachers enough to educate, now you want them to be armed bodyguards too? Are you willing to pay them what you pay your security detail? Doubtful.

No.. no it won’t. I never thought that a prerequisite to teaching would be to know how to shoot and use a gun, and “you must be willing to kill someone.” I am a teacher…. I am an Army veteran as well… and this isn’t the solution sir. Arming teachers with guns.. nope!

I’m pro 2A. Hell, I’m pro gun ownership, but I’ve also seen first-hand what a rifle round does to a body while serving as a medic in Afghanistan. It makes me sick to know American students have seen it in their schools. Don’t tell me this is the best we can do. #VetsForGunReform pic.twitter.com/2sP7QlfLre

I am a retired combat #veteran and I support common sense reform of our current gun laws.#VetsForGunReform & #2A

The legislation absolutely must be steered by people who know about guns & unpolarized by 2A…NOT the @NRA @PPFA or @splcenter pic.twitter.com/SxF92Lz5NC

This is true. I shot competitively (tried out for the ‘84 Olympics), and spent 16 years in the Army. I was qualified as an Expert in both Rifle and Pistol.

In live fire simuulators I had a really high hit rate, almost 40 percent. Think about that. https://t.co/CUjUrWDhiC

This is the weapon I carried in a theater of war to kill people with. I did this as part of a "well regulated militia" (FLARNG) When I came back, this weapon was turned in. I do not believe civilians should have access to these weapons of war. #VetsForGunReform pic.twitter.com/cY0bOZCbgT

On the left: Me, carrying an M4 rifle in Afghanistan.

On the right: Me, dropping a 120mm mortar round in Afghanistan.

Giving civilians assault rifles meant for war makes about as much sense as giving them mortars.

As a soldier, I wielded a rifle that could hit targets out to 500m. Its sole purpose was/is to take as many human lives as efficiently as possible. As a civilian now, I see no need for any of my fellow citizens to have unfettered access to similar weaponry. #VetsForGunReform