President Donald Trump has reiterated his desire to see U.S. troops march through Washington in a grand display of military... 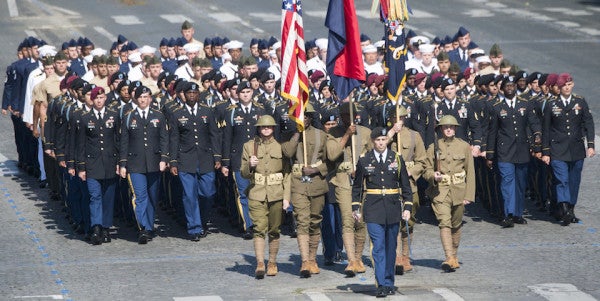 President Donald Trump has reiterated his desire to see U.S. troops march through Washington in a grand display of military might modeled on France’s Bastille Day parade, which the president attended this summer.

Trump was blown away by what he experienced in Paris on July 14, when he joined French President Emmanuel Macron at the Place de la Concorde to watch thousands of French troops advance down the Champs-Elysées. The troops were accompanied by 241 horses, 63 airplanes, and 29 helicopters.

The annual parade commemorates the 1789 storming of the Bastille prison, a major turning point in the French Revolution. About 150 U.S. service members also took part in this year’s parade to mark the 100th anniversary of America’s entry into World War I.

“I came back and one of my early calls were, I think we are going to have to start looking at that ourselves,” Trump told Macron during a meeting in New York on Sept. 18. “We are actually thinking about Fourth of July, Pennsylvania Avenue, having a really great parade to show our military strength.”

The president’s infatuation with military parades dates back to at least December, when emails obtained by the Huffington Post revealed that his team had explored — and ultimately rejected — the idea of including military vehicles in his inaugural parade.

And days before he took the oath of office, Trump told The Washington Post that “we’re going to show the people as we build up our military we’re going to display our military. That military may come marching down Pennsylvania Avenue.”

A major military parade hasn’t taken place in Washington since 1991, when, according to The New York Times, 80 pieces of military hardware, including amphibious assault vehicles and “at least one M1 tank,” rumbled through the streets of the nation’s capital in celebration of America’s Gulf War victory. The parade cost $12 million, more than half of which came from federal funds.

On Monday, Trump told Macron that what he witnessed on the tree-lined Champs-Elysées on July 14 “was one of the greatest parades have ever seen,” eliciting a little chuckle from the newly elected French president. But Trump wasn’t joking.

“We’re going to have to try and top it,” Trump continued, according to BuzzFeed News. “Having a really great parade to show our military strength…We’re spending this year $700 billion — more than we’ve ever spent on our military — which is a good thing for you, because we’re friends. OK?”

It is unclear whether or not Trump’s July 4 military parade would be an annual event. How it would be funded remains a mystery, as well. But the president appears determined to make it happen.

“We’ll see if we can do it this year, but we certainly will be beginning to do that,” he said on Monday, adding that he had spoken to his chief of Staff, John F. Kelly, and others about getting the planning process underway.

As they say, if you’ve got it, flaunt it.