Trump Might Not Be Giving Us A Parade We Want, But It’s The One We Deserve

Desert Storm was one of the most lopsided conflicts in modern history. For several weeks in the spring of 1991,... 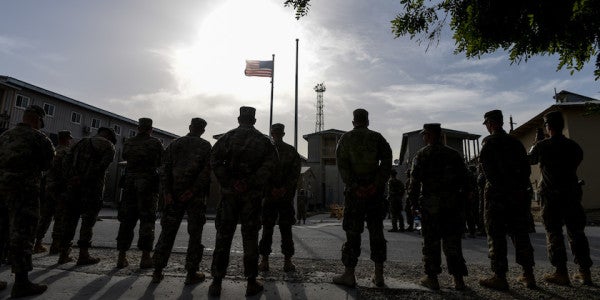 Desert Storm was one of the most lopsided conflicts in modern history. For several weeks in the spring of 1991, an American-led coalition of 32 countries pummeled the military of Saddam Hussein as it retreated from Kuwait into the heart of Iraq. Casualty estimates vary widely, but it’s safe to say that tens of thousands of Iraqis — soldiers and civilians — were killed in the offensive. Coalition ground forces stopped short of Baghdad. Commanders theorized (correctly) that taking out Saddam would plunge the country into a civil war. In the years that followed, hundreds of thousands of Iraqis perished as a result of malnutrition, preventable diseases, and other causes attributable to the international sanctions that the United States advocated for to punish Saddam. We obliterated Iraq. Mission accomplished.

Every war has a unique set of stakes and challenges. What it takes to win one is not the same as what’s required to win another. That’s obvious. So is the fact that to win anything — a war, a sports match, a video game — there needs to be a clear objective. What had qualified as a victory for the coalition in Desert Storm was fairly straightforward: Drive Saddam’s army out of Kuwait. Every evening, millions of Americans, my 7-year-old self included, gathered in front of our televisions and watched our troops carry out that mission with awesome efficiency. The ground campaign was over within 100 hours. And when our troops returned home, we flooded the streets of New York City and Washington and celebrated their return. Of course we did. The fact that the operation was far more devastating for the Iraqi people than Saddam’s regime didn’t matter. We were the winning team and winners get to party.

So then why, 27 years later, would President Donald Trump order the military to stage another parade through the nation’s capital — but this time in the midst of a conflict that America hasn’t won? Your guess is as good as mine. Competing theories abound. But here’s a question that everyone, including those who find the president’s order appalling, can help answer: Why hasn’t this country held a national military parade since 1991?

The youngest person who could have served with the U.S. military in the opening phase of the War on Terror would now be somewhere around 35 years old. The closest he or she has ever come to experiencing a big victory moment occurred on May 1, 2003, when President George W. Bush stood aboard the USS Abraham Lincoln under a banner emblazoned with the words “Mission Accomplished.” However, this time, there were no ticker tape parades in New York and Washington for the troops who crushed Saddam. Same goes for those who fought in the battles in Fallujah, and Sadr City, and Ramadi, and Marjah, and all of the other engagements the military has chalked up as “wins” over the years. Did those victories deserve to be celebrated? By the service members who participated in them, sure. But by the rest of us? That, it seems, would require something that our troops have not yet accomplished: a victory that all of us can call our own.

Soliders pay their final respects to two fallen Marines and a Navy Corpsman at Forward Operating Base Morales-Fraizer.Marine Corps photo

Commentators have been quick to point out that dictators and despots are fond of national military parades. However, that doesn’t mean that such parades are quintessentially un-American — and I don’t say that simply because we’ve conducted quite a few of them ourselves. For 17 years, we have leaned on our military with increasing pressure to pursue complex foreign policy objectives on multiple fronts around the world. To millions of people beyond our borders, America epitomizes the militant society we are pretending not to be when we gasp at the thought of Trump putting that dark little secret on a pedestal. At the very least, a multi-million dollar procession of tanks, fighter jets, and missile launchers rumbling through our nation’s capital might remind us that for nearly two decades those very same tools of death have been regular — and extremely destructive — fixtures in the countries where our troops are still fighting on our behalf.

Do I find the idea of forcing service members to perform a charade that will cost a lot of time, money, and resources and ultimately do nothing to make our country stronger or more safe repulsive? Yes, I do. But lest we forget, we’ve been treating them that way since 2001. We’ve sent them into battle after battle in a growing list of countries without a logical explanation for why they’re killing people, and why their buddies are dying, and why they’re getting their legs blown off. Until we come up with a clear definition of success — say, a hill to conquer or an army to vanquish — it’s just war for the sake of war. That’s a dog and pony show. Soldiers don’t go to war. Countries do. Trump might not be giving us a parade we want, but it’s certainly one we deserve.

I imagine that most of the soldiers who’ll participate in the parade are too young to have served in those battles I mentioned, which is probably a good thing. Few hearts would swell with national pride at the sight of a bunch of old mutts and hobbled clydesdales trudging down Pennsylvania Avenue. And, really, this isn’t about them. It’s about the people in the crowd and the big whigs in the viewing stands. They’re not there to hear war stories or listen to more complaints about the VA. They just want to see the troops march, and march, and march.