The federal watchdog responsible for tracking how American tax dollars are being spent in Afghanistan claimed in a new report... 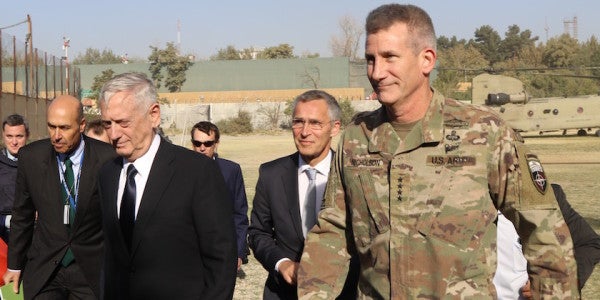 The federal watchdog responsible for tracking how American tax dollars are being spent in Afghanistan claimed in a new report that the Department of Defense is deliberately attempting to obscure the extent to which the Taliban and other insurgent groups in the country are flourishing even amid the intensifying U.S.-led military campaign to batter them into submission.

In its January 2018 quarterly report to Congress, the Office of the Special Inspector General Investigator for Afghanistan Reconstruction (SIGAR) indicated that the massive amount of ordnance deployed — October 2017 saw more American bombs dropped in Afghanistan during any month since 2012, when there were more than five times the number of U.S. service members in the country than there are now — and expanding the U.S. military footprint in Afghanistan, have done little, if anything, to break the stalemate.

However, because of the Pentagon’s refusal to fully cooperate with SIGAR, the SIGAR report does not include what is perhaps the most digestible metric for assessing progress in America’s longest-running war: data showing how much of the country the U.S.-backed Afghan government currently controls or influences compared to how much is controlled or influenced by insurgents.

SIGAR called the DoD’s efforts to reduce transparency “troubling for a number of reasons,” stating in the report that “this is the first time SIGAR has been specifically instructed not to release information marked ‘unclassified’ to the American taxpayer.”

Congress has appropriated roughly $120.9 billion for Afghanistan relief and reconstruction since 2002, and President Donald Trump has stated in no uncertain terms that he is fully committed to winning the war. Over the summer, military officials, including Mattis, persuaded the president that the impasse could be broken by ramping back up America’s involvement in the war.

A breakdown of which districts the Afghan government controls compared to insurgents is now public, thanks in part to NPR, which specifically requested it from the DoD prior to the report’s release.

In November 2015, more than a year after U.S. troop levels dropped below 10,000, the Afghan government controlled or influenced 72% of the districts. The number of U.S. service members deployed to Afghanistan is expected to soon reach 15,000.

Hours after both the SIGAR report and the NPR article were published, the U.S.-led NATO coalition in Afghanistan issued a statement calling the gag order a mistake. “It was NOT the intent of Resolute Support to withhold or classify information which was available in prior reports,” Gresback told Associated Press in an email. “A human error in labeling occurred.”

But despite Gresback’s “human error” claim, other previously available information — such as numbers illustrating the size and battlefield performance of Afghan forces, including casualty figures — are now unavailable to the American public. That data is also crucial to understanding whether or not the current U.S. military strategy in Afghanistan — building an Afghan military powerful and cohesive enough to one day assume full responsibility for the country’s national security — is actually succeeding or not.

After more than 16 years of trial and error, the Pentagon appears confident that it has finally found a winning formula under Trump, who has made it a point to distinguish his approach to the war in Afghanistan from that of his predecessors, both of whom relied much more heavily on conventional military forces to hold ground and inspire loyalty among the civilians who inhabit the battlefield. “We are not nation building again,” Trump vowed in August. “We are killing terrorists.”

To accelerate the bloodletting, the president granted Mattis the authority to tweak the rules of engagement and increase troop levels by several thousand. The Pentagon now has the freedom to flex its muscles after years of feeling constrained by the more diplomacy-oriented policies of President Barack Obama. A failure in Afghanistan under Trump would undercut the prevailing theory among military commanders that meddling politicians and arbitrary timetables are largely to blame for their inability to effectively prosecute the war. In other words, there is a lot more at stake for the Pentagon in Afghanistan than Afghanistan itself.

Executing this magic strategy has naturally fallen on the shoulders of the U.S. Special Operations Command, which has used its newfound freedom to push its troops closer to the front lines in order to bolster the beleaguered Afghan national security forces with tactical expertise and an abundance of precision firepower. SOCOM is also spearheading the counterrorism campaign to defeat an offshoot of the Islamic State, dubbed ISIS-K, which has established a firm foothold in eastern Afghanistan. Afghan President Ashraf Ghani said in a recent 60 Minutes interview that there are currently “21 international terrorist groups” currently operating in his country.

The strategy has resulted in a significant uptick in American airstrikes targeting not just Taliban militants and other anti-government forces, but also their sources of illicit revenue — namely, Afghanistan’s multibillion dollar opium harvest, which surged in the wake of the 2001 invasion and now produces roughly 80% of the world’s heroin. In its January report, SIGAR cast serious doubt on the Pentagon’s recent claims that those counternarcotics efforts — which last year cost the American taxpayer $8.7 billion — are paying off.

“Afghanistan’s total area under opium cultivation and opium production reached an all-time high in 2017,” the report states. SIGAR cited a November 2017 report by the United Nations Office on Drugs and Crimes (UNODC), which found that opium cultivation expanded by 63% from the previous year and now encompasses an area nearly the size of Rhode Island.

Until recently, Trump’s strategy seemed to hinge on the prediction that the Taliban would eventually buckle under the constant barrage of coalition airstrikes and special operations raids and come to the negotiating table. That no longer appears to be the case. On Jan. 29, two days after a Taliban car-bombing killed more than 100 people in Kabul, the president signaled that the total defeat of the insurgent group is now the only acceptable option.

“When we see what they’re doing and the atrocities that they’re committing, and killing their own people, and those people are women and children, many, many women and children that are totally innocent, it is horrible,” he said. “So there’s no talking to the Taliban. We don’t want to talk to the Taliban. We’re going to finish what we have to finish. What nobody else has been able to finish, we’re going to be able to do it.”