Nobody Knows How Many Afghan Security Forces Really Exist, And The US Can’t Fix It

It’s no surprise that the state of affairs in Afghanistan isn’t what the Department of Defense hoped for as the... 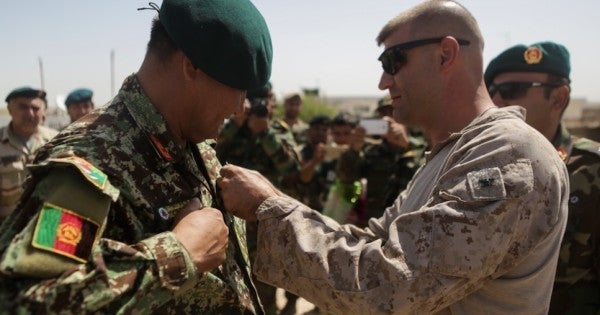 It’s no surprise that the state of affairs in Afghanistan isn’t what the Department of Defense hoped for as the U.S. enters its 16th year of war with the Taliban, but a new analysis of the $70 billion spent trying to shore up the Afghanistan National Security Forces, paints an even more dire picture: The U.S. has failed miserably at building up Afghan security forces.

Corruption, attrition, illiteracy, and increasingly disruptive Taliban interference have left Afghanistan with a hamstrung military incapable of operating without the support of American military personnel — and that’s a the U.S. may not be able to fix, no matter how much money, time, and military aid the Pentagon continues to pour into the country, according to the Special Inspector General for Afghanistan Reconstruction (SIGAR) report from Sept. 2017.

An Afghan National Army soldier with the Helmand Regional Military Training Center prepares to fire an M4 carbine at Camp Shorabak, Afghanistan, May 11, 2017. Approximately 15 Marine advisors with Task Force Southwest practiced firing and proper range protocol with Afghan trainers in preparation for the unit’s first operational readiness cycle, which is scheduled to begin May 20. For the next two months, the Marines will make recommendations for sustainment and improvement with the Afghan trainers, as they instruct the 2nd Kandak, 4th Brigade on infantry tactics. (U.S. Marine Corps photo by Sgt. Lucas Hopkins)

“The U.S. government was ill-prepared to conduct programs of the size and scope required in Afghanistan,” wrote SIGAR chief John Spoko, adding that in the early years after the post-9/11 U.S. invasion, the Pentagon “focused solely on U.S. military operations and did not include the development of an Afghan army, police, or supporting ministerial-level institutions.” Just as disbanding the Iraqi Armed Forces after the 2003 invasion created tremendous obstacles for security efforts there, allowing Afghanistan’s security sector to wither has thrown the country’s long-term stability into doubt.

SIGAR found that the U.S. did not adequately prepare to provide security sector assistance in the country, failed to build trust among recruits and trainees, and created dependency issues by disregarding the educational disparity between U.S. trainers and Afghan troops.

As a result of these missteps, the Pentagon is facing a key challenge in one major area: raw manpower. As of 2017, the ANDSF is nowhere near the 352,000 troop level mark that it claims to have. Between 2008 and 2014, after NATO forces finally slapped together a functional training and capacity-building regimen, ANA forces more than double from 80,000 to 185,000 personnel, but those numbers have remained stagnant due to high attrition rates, according to the SIGAR report.

For all the talk of U.S. troop levels in the country, personnel problems have long plagued Afghanistan National Security Forces, leading to a cycle of corruption and fraud that makes developing a long-term security plan near impossible for one simple reason: neither the the Pentagon nor Afghan officials “truly know how many Afghan soldiers and police are available for duty, or, by extension, the true nature of their operational capabilities” due to shady and inconsistent record keeping, according to a 2016 SIGAR report on the ANDSF.

The lack of transparency of the ANDSF’s fraught personnel system is perhaps most viscerally captured in a report from the Bureau of Investigative Journalism, is that of “ghost soldiers” — troops that are paid, equipped, and trained on the Pentagon’s dime, but don’t actually exist. The new SIGAR report found that of the nearly 350,000 ANDSF troops that are on the payroll, nearly 200,000 of them are ghost soldiers, with the money likely being distributed among corrupt government officials.

“All districts receive central government budget to cover salaries of front-line forces,” reporter Jessica Purkiss wrote for the Bureau. “In many areas in Afghanistan, some of this budget disappears and the actual number of officers tasked with holding back the Taliban is much lower than the number actually allotted.”

The resulting salary loss, also documented the SIGAR report, is a key indicator of troop inflation. Over $300 million in salaries are budgeted annually for the Afghan National Police and paid out by the Department of Defense. But that figure is based on records with incomplete or missing personnel data, the SIGAR report suggested after a study was commissioned in 2015 — meaning no one really knows how many ghost police there are. And that’s just among the police force.

The phenomenon is not surprising. Inflating troop numbers allows for additional funding, equipment, and support personnel — enabling the corruption that incapacitates the ANDSF. Weapons, in particular, are one of the ways SIGAR has been able to track the impact of ghost soldiers: In 2014, a SIGAR report showed that 203,888 of the 474,823 weapons with serial numbers recorded in the Afghan National Security Forces’ Operational Verification of Reliable Logistics Oversight Database (OVERLORD), “(43 percent), were missing information and/or were duplicative.” No one knows what happened to them in any official capacity, according to a 2014 Gawker report.

The ghost soldier phenomenon can also be seen on smaller scales in provinces throughout the country. In 2016, the Helmand police chief, Aqa Noor Kintoz, reported he believes that half of his force are ghosts. There are roughly 10,000 police personnel in Helmand, 16,000 army soldiers, and an unknown number of public protection forces and border security forces, Kintoz told Afghanistan’s TOLO news, adding that some 50% simply “did not exist physically when we asked for help during operations.” And according to the Bureau report, council members in the Nawa district of the Helmand province — a locale that at one point was an example of what success would like like in the Global War on Terror — fell to the Taliban because the district’s estimated 700 police were closer to 300.

But the corruption and malfeasance embodied by ghost soldiers aren’t the only issue: Illiteracy is a major cause of disconnect between Afghan troops and American trainers. The SIGAR report shows that 70% of the country is illiterate, and U.S. training methods haven’t taken that into account. Not only can most of the Afghan recruits not read and write, but a majority of them have also led lives devoid of the technology used to train Western soldiers, a learning curve that DoD planners failed to anticipate.

“At one point, training sessions for Afghan police were using PowerPoint-based curricula from the U.S.-NATO Balkan operations,” Sopko said at CSIS. “The presentations were not only of questionable relevance to the Afghan setting, but also overlooked the high levels of illiteracy among the police. Such cut-and-paste activities, lifted from one country and slapped onto another like a decal, are not likely to boost the prospects for overall success.”

In a sobering mea culpa to those gathered at CSIS, Sopko acknowledged that the U.S. is partly to blame for failures with the ANDSF. He told those present at CSIS that we must “recognize that the U.S. approach to security sector assistance in Afghanistan over the past fifteen years may have actually contributed to the ANDSF’s inability to secure the country from threats and prevent the re-establishment of safe havens for terrorists.”

Unfortunately, it took 16 years for the Pentagon to realize that Afghan recruits aren’t 18-year-olds who signed up to serve after receiving high school degrees. And although Sopko said that time and continued support from U.S. forces will eventually lead to a self-sustaining ANDSF, not everyone is convinced.

“[If] 140,000 international troops could not solve that problem,” Christopher Kolenda, a former U.S. military officer in Afghanistan, told Purkiss, “ 3,500 more American troops now cannot do so, either. Only the Afghan government can solve it, and they have yet to demonstrate the willingness to do so.”